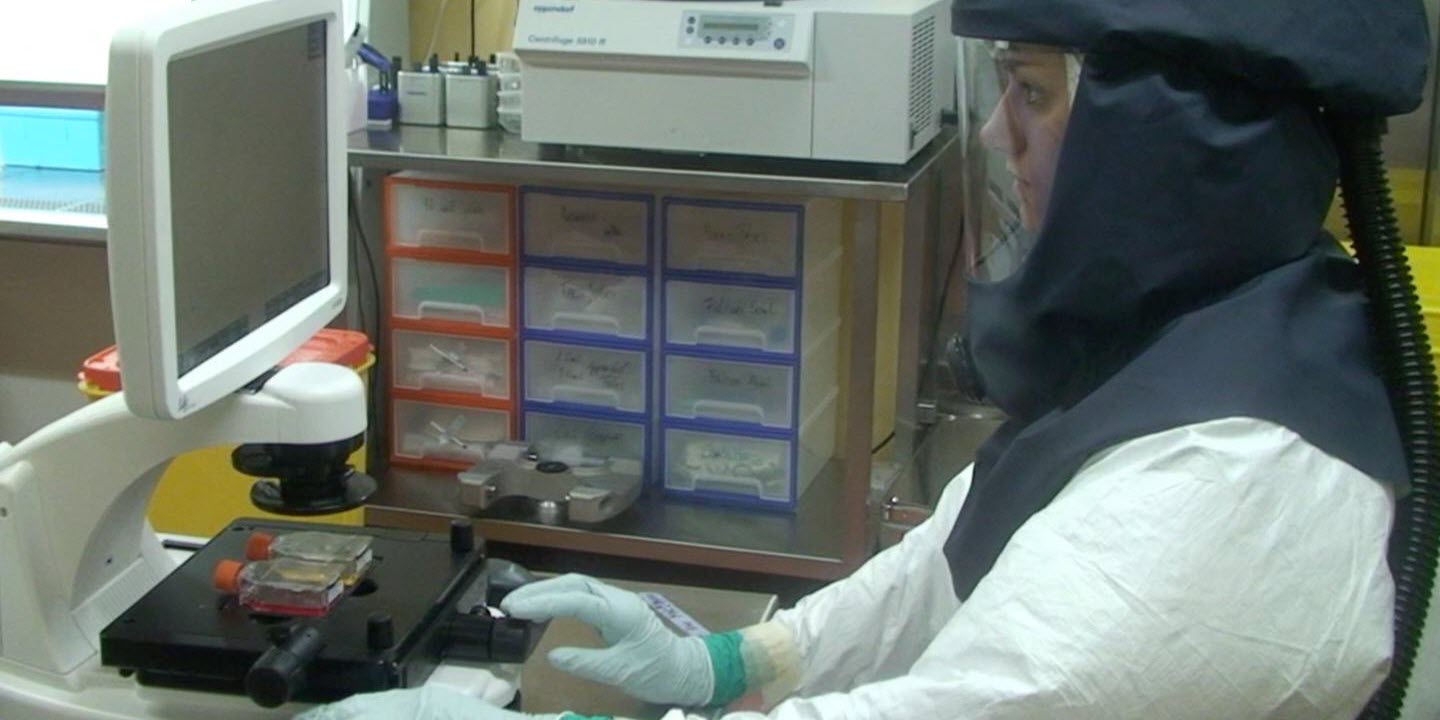 Working at high-security laboratory of the Institute of Virology and Immunology (IVI).
© IVI

Prior to the emergence of new mutants of the coronavirus, such as the British variant B.1.1.7, the SARS-CoV-2 variant named D614G had already mutated from the original SARS-CoV-2 pathogen that triggered the pandemic. D614G has rapidly spread to become the most abundant variant worldwide and this D614G mutation remains in all the new emerging variants.

An international team including researchers from Bern has now been able to demonstrate in both the laboratory and in animal models why the D614G variant was able to gain the upper hand over the original SARS-CoV-2 virus.

"Our approach also allows us to characterize emerging mutations such as the British variant B.1.1.7 better and quicker," says Volker Thiel of the Institute of Virology and Immunology (IVI), one of the four lead authors of the study. The findings are extremely important for assessing the risk of new mutants running rampant, as they show how a fitness advantage of virus variants can lead to higher transmission. First results were released earlier allowing for scientific discussion on what is known as a preprint server. The results of the study have now been published in full in Nature.

The D614G variant carries a mutation in the spike protein that makes it easier for the virus to dock onto human cells. The researchers at IVI and in David E. Wentworth's laboratory at the Centers for Disease Control and Prevention in Atlanta (USA) first demonstrated in human cell cultures from the upper respiratory tract, as well as from the nose, that the D614G variant binds more strongly and also replicates faster than the original virus. The increased replication of the D614G variant was also confirmed in vivo, in a new mouse model first described in this study. These experiments were also carried out at the IVI in Charaf Benarafa's group.

The spread of SARS-CoV-2 viruses can be studied better in other animals rather than mice. Hamsters and ferrets are well established in infection research and are especially suitable animal models. To compare the two variants, a mixture of equal parts of the original version of the SARS-CoV-2 virus and the D614G variant was applied into the nose of each animal under light anesthesia. After one day, experimentally infected animals were rehoused with another healthy sentinel animal of the same species, to evaluate the transmission of the two variants in direct competition with each other. The experiment was repeated with six pairs of animals in total.

Related Article: How Long Are You Contagious for Once You Get COVID-19?

In virtually all sentinel animals, the proportion of transmitted SARS-CoV-2 viruses was massively dominated by the D614G variant early on. The differentiation of the variants was carried out using the latest sequencing technology and PCR techniques by Martin Beer's team at the Friedrich Loeffler Institute, Federal Research Institute for Animal Health, in Greifswald-Insel Riems (D).

"Our study stands out because we were able to clearly discern the more efficient transmission of the mutated variant in direct comparison with the original variant," says Thiel.

This approach can even be used to test any single mutation or a specific combination of mutations that are present in a number of currently circulating viral variants. The IVI relies on a cloning technique developed in Bern a year ago, in which SARS-CoV-2 viruses can be exactly reproduced in the laboratory. The British virus, for example, is known to have not just one but often more than 14 mutations, eight of which occur in the spike protein. Thus, with the help of the cloning technique, any number of mutations of variants can be reproduced and used to compete against each other in the established cell cultures and animal models. The results show how single mutations affect the fitness and transmissibility of new variants.

"Our testing strategy allows us to rapidly examine why other, newly emerging virus variants have become established," Thiel says.

Similar research projects on infectious pathogens could also be carried out in the future at the newly established Multidisciplinary Center for Infectious Diseases and Immunity (MCIDI) at the University of Bern.

- This press release was originally published on the University of Bern website. It has been edited for style