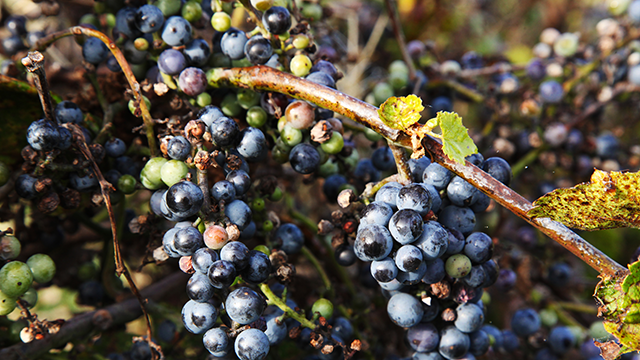 Researchers have identified a wild yeast that is more effective than a pesticide at preventing common grape molds. The yeast strain is one of many found on wild grapes, as well as a smaller number found on farmed grapes, that can inhibit common grape molds. The study, published today in open-access journal Frontiers in Microbiology, suggests that wild yeasts could be an eco-friendly alternative to chemical pesticides.

"The 'wild' environment represents a huge and largely untapped source of biodiversity, which could provide a reservoir of helpful microbes for pest control," says Ileana Vigentini, a researcher at the University of Milan.

At present, many farmers use chemical pesticides to control fungal diseases. However, pesticides leave hazardous residues in the environment that can have significant consequences for local ecosystems. Traces of pesticides can also end up in food, and could affect human health. In addition, many fungi are becoming resistant, meaning that pesticides may not work effectively.

The European Union has restricted certain pesticides, meaning that the race is on to come up with eco-friendly alternatives. One possibility is to use natural yeasts—themselves a type of fungi—to inhibit disease-causing fungi in crops. Microbes like yeasts often compete with one another, and naturally produce substances to kill or slow down their rivals. However, so far, researchers have not been able to find yeasts that are as effective as chemical pesticides.

In the study, Vigentini, Gustavo Cordero-Bueso and colleagues investigated whether yeasts isolated from the skins of wild or farmed grapes could inhibit three common molds that can ruin grape harvests. Initially, the research team isolated and identified yeasts from a type of wild grape in Georgia, Italy, Romania, and Spain, and farmed grapes from vineyards in Italy.

The team tested whether the yeasts could inhibit mold growth in the lab, and identified the top 20 yeasts with the most potent anti-mold effects. Of these, a whopping 18 strains came from the wild grapes, suggesting that wild plants could be a promising reservoir for useful microbes.

The team went on to investigate the possible mechanisms the yeasts use to inhibit the molds. They found that many of the yeasts release enzymes that can digest the molds' cell wall, or release substances such as acetic acid or hydrogen sulfide that can kill the molds. Finally, the researchers tested the yeasts' ability to stop the molds from growing on grapes and compared them with a commercial pesticide.

Strikingly, one yeast strain was more effective than the chemical pesticide at preventing mold growth. Previous work has shown that this yeast strain does not interfere with wine fermentation, and can survive harsh conditions. This might make it well-suited as a biocontrol agent in vineyards, but outdoor trials are needed to confirm this.

"We plan to test some of these yeast strains as a substitute for chemical pesticides in field trials using grapevines," says Vigentini.