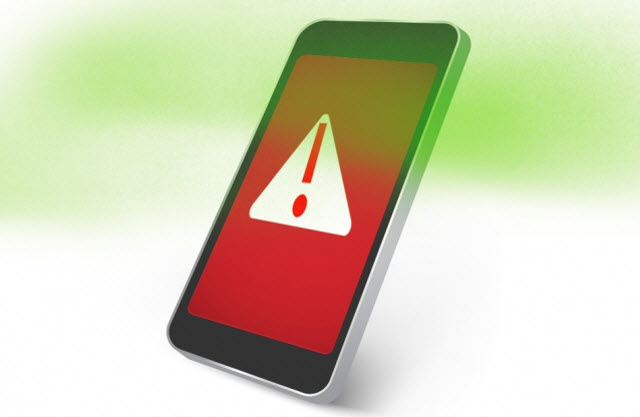 MIT researchers have developed low-cost chemical sensors, made from chemically altered carbon nanotubes, that enable a smartphone or other wireless devices to detect trace amounts of toxic gases.Image Courtesy of: Christine Daniloff/MIT

Using the sensors, the researchers hope to design lightweight, inexpensive radio-frequency identification (RFID) badges to be used for personal safety and security. Such badges could be worn by soldiers on the battlefield to rapidly detect the presence of chemical weapons—such as nerve gas or choking agents—and by people who work around hazardous chemicals prone to leakage.

“Soldiers have all this extra equipment that ends up weighing way too much and they can’t sustain it,” says Timothy Swager, the John D. MacArthur Professor of Chemistry and lead author on a paper describing the sensors that was published in the Journal of the American Chemical Society. “We have something that would weigh less than a credit card. And [soldiers] already have wireless technologies with them, so it’s something that can be readily integrated into a soldier’s uniform that can give them a protective capacity.”

The sensor is a circuit loaded with carbon nanotubes, which are normally highly conductive but have been wrapped in an insulating material that keeps them in a highly resistive state. When exposed to certain toxic gases, the insulating material breaks apart, and the nanotubes become significantly more conductive. This sends a signal that’s readable by a smartphone with near-field communication (NFC) technology, which allows devices to transmit data over short distances.

The sensors are sensitive enough to detect less than 10 parts per million of target toxic gases in about five seconds. “We are matching what you could do with benchtop laboratory equipment, such as gas chromatographs and spectrometers, that is far more expensive and requires skilled operators to use,” Swager says.

Moreover, the sensors each cost about a nickel to make; roughly 4 million can be made from about 1 gram of the carbon nanotube materials. “You really can’t make anything cheaper,” Swager says. “That’s a way of getting distributed sensing into many people’s hands.”

The paper’s other co-authors are from Swager’s lab: Shinsuke Ishihara, a postdoc who is also a member of the International Center for Materials Nanoarchitectonics at the National Institute for Materials Science, in Japan; and PhD students Joseph Azzarelli and Markrete Krikorian.

In recent years, Swager’s lab has developed other inexpensive, wireless sensors, called chemiresistors, that have detected spoiled meat and the ripeness of fruit, among other things. All are designed similarly, with carbon nanotubes that are chemically modified, so their ability to carry an electric current changes when exposed to a target chemical.

This time, the researchers designed sensors highly sensitive to “electrophilic,” or electron-loving, chemical substances, which are often toxic and used for chemical weapons.

To do so, they created a new type of metallo-supramolecular polymer, a material made of metals binding to polymer chains. The polymer acts as an insulation, wrapping around each of the sensor’s tens of thousands of single-walled carbon nanotubes, separating them and keeping them highly resistant to electricity. But electrophilic substances trigger the polymer to disassemble, allowing the carbon nanotubes to once again come together, which leads to an increase in conductivity.

In their study, the researchers drop-cast the nanotube/polymer material onto gold electrodes, and exposed the electrodes to diethyl chlorophosphate, a skin irritant and reactive simulant of nerve gas. Using a device that measures electric current, they observed a 2,000 percent increase in electrical conductivity after five seconds of exposure. Similar conductivity increases were observed for trace amounts of numerous other electrophilic substances, such as thionyl chloride (SOCl2), a reactive simulant in choking agents. Conductivity was significantly lower in response to common volatile organic compounds, and exposure to most nontarget chemicals actually increased resistivity.

Creating the polymer was a delicate balancing act but critical to the design, Swager says. As a polymer, the material needs to hold the carbon nanotubes apart. But as it disassembles, its individual monomers need to interact more weakly, letting the nanotubes regroup. “We hit this sweet spot where it only works when it’s all hooked together,” Swager says.

To build their wireless system, the researchers created an NFC tag that turns on when its electrical resistance dips below a certain threshold.

Smartphones send out short pulses of electromagnetic fields that resonate with an NFC tag at radio frequency, inducing an electric current, which relays information to the phone. But smartphones can’t resonate with tags that have a resistance higher than 1 ohm.

The researchers applied their nanotube/polymer material to the NFC tag’s antenna. When exposed to 10 parts per million of SOCl2 for five seconds, the material’s resistance dropped to the point that the smartphone could ping the tag. Basically, it’s an “on/off indicator” to determine if toxic gas is present, Swager says.

According to the researchers, such a wireless system could be used to detect leaks in Li-SOCl2 (lithium thionyl chloride) batteries, which are used in medical instruments, fire alarms, and military systems.

Alexander Star, a professor of chemistry and bioengineering and clinical and translational science at the University of Pittsburgh, says the researchers’ design for a wireless sensor (or dosimeter) for electrophilic substances could improve soldier safety.

“The authors were able to synthesize a [carbon nanotube] composite sensitive to … a class of chemicals of high interest for sensing,” Star says. “This type of device architecture is important for real-life application, due to the fact that a chemical weapon dosimeter worn by military and security personnel requires rapid reading.”

The next step, Swager says, is to test the sensors on live chemical agents, outside of the lab, which are more dispersed and harder to detect, especially at trace levels. In the future, there’s also hope for developing a mobile app that could make more sophisticated measurements of the signal strength of an NFC tag: Differences in the signal will mean higher or lower concentrations of a toxic gas. “But creating new cell phone apps is a little beyond us right now,” Swager says. “We’re chemists.”

The work was supported by the National Science Foundation and the Japan Society for the Promotion of Science.