A University of Wisconsin-Madison engineer's solution for streamlining the construction of skyscrapers is having a skyscraper moment in one of the most seismically active regions of the country.

All coupling beams in the 1.5 million-square-foot Lincoln Square Expansion — which includes luxury condos, a hotel, dining, retail and office space in two 450-foot towers in the heart of Seattle suburb Bellevue, Washington — are made of fiber-reinforced concrete using a unique design co-developed by Gustavo Parra-Montesinos, professor of civil and environmental engineering at UW-Madison. 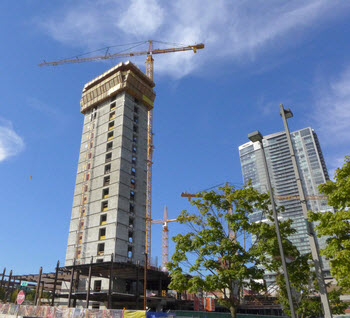 Fiber-reinforced concrete developed in part by UW–Madison engineers protects The Lincoln Square Expansion in Bellevue, Washington against frequent earthquake activity.Photo courtesy of Cary Kopczynski & CompanyThese concrete coupling beams span doorways and windows, helping walls with such openings in them to function as a single structural unit, while bolstering the building as a whole against earthquakes.

Traditionally, coupling beams are reinforced with a labyrinth of rebar, adding a great deal of time, cost and complexity to the construction process.

"Placement of the rebar in these link beams can sometimes control the construction schedule," says Cary Kopczynski, whose Seattle-based firm is the structural engineering company for the project. "Most of the west coast of the U.S., of course, is a highly seismic area, so when you're building concrete structures, they require a lot of intricate rebar to carry the seismic loads."

As an alternative to excessive amounts of rebar, Parra-Montesinos' solution incorporates steel fibers into the concrete mix, and he and University of Michigan collaborator James K. Wight engineered that approach to create beams that equal or exceed the performance of cumbersome rebar designs, yet simplify and speed up the construction process.

The first real-world implementation of the coupling beam solution occurred a few years back. Kopczynski incorporated the fiber-reinforced coupling beams into a portion of The Martin, a 255-foot, 23-story apartment building completed in Seattle in 2013.

Kopczynski credits The Martin's owner and developer for taking a chance on a technology grounded in research, simulation and laboratory-scale testing, but not yet implemented in the field. "They were very interested in being innovative and embracing new technologies," he says. "That project was viewed as being a huge success because it reduced the level of uncertainty that existed prior to actually using it."

This time around, the teams behind the Lincoln Square Expansion embraced the coupling beam technology because of the overwhelmingly positive feedback they received from crews who worked with it on The Martin project, says Kopczynski.

Related article: Filling in the Cracks

"The reason we're using the new coupling beams is that they're faster, less expensive, and reduce the potential for field mistakes," he says. "With traditional coupling beams, it's very common to have placing mistakes in the field because of all of the intricacy. Now, not only can we build the building faster and more simply, but we can reduce the potential for field errors."

Because the new technology is not yet included in the American Concrete Institute's building code — which sets the agenda for the concrete construction industry and its regulators — both buildings have had to pass muster with outside peer reviewers engaged by local officials.

Parra-Montesinos hopes it will be included in the next edition of the code, which is due out in 2019.

"I think we've come up with a very robust design," he says. "We just need to be able to specify the minimum performance requirement for the fiber-reinforced concrete based on standard material tests."

Currently, with funding from the Charles Pankow Foundation and other industry partners, Parra-Montesinos and his students are studying other types of steel fibers incorporated into the concrete in various quantities.

Gustavo Parra-MontesinosPhoto courtesy of the University of Wisconsin-Madison"Ultimately, we expect to establish a link between material behavior and seismic performance of the coupling beam so that users are not required to use the same fiber and in the same amounts as we used in our past research," Parra-Montesinos says. "This is a required step to develop design provisions for the building code."

His research emphasizes large-scale physical testing, an approach that is helping the construction world catch up to the promise of fiber-reinforced concrete. Kopczynski recognizes that potential, and he looks forward to seeing the new coupling beams become more widely adopted in skyscraper construction.

However, he says, a greater payoff will occur when innovative structural engineers like Parra-Montesinos develop ways to incorporate fiber-reinforced concrete into other key building components. "Then, we could potentially start reducing the reinforcement-bar requirements throughout the entire core of the building, and that would have an impact in a very positive way on the way we build concrete buildings," Kopczynski says.