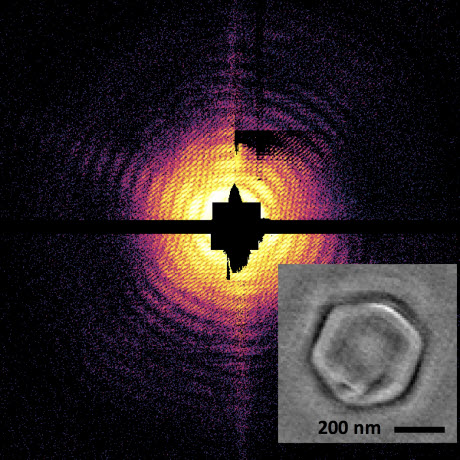 In the new study, the authors superimposed scattered X-ray light from the mimivirus with scattered X-ray light from a reference sphere (main image). The curvature in the superimposed images from the two objects provided depth information and details about the shape of the virus. The image in the lower right corner is a holographic reconstruction of the virus based on the X-ray diffraction patterns collected during the experiment.Image credit: Anatoli Ulmer and Tais Gorkhover / The Technical University of Berlin and SLAC National Accelerator LaboratoryHolography, like photography, is a way to record the world around us. Both use light to make recordings, but instead of two-dimensional photos, holograms reproduce three-dimensional shapes. The shape is inferred from the patterns that form after light ricochets off an object and interferes with another light wave that serves as a reference.

When created with X-ray light, holography can be an extremely useful method for capturing high-resolution images of a nanoscale object—something that is so small, its size is measured in nanometers, or billionths of a meter.

So far, X-ray holography has been restricted to objects that form crystals or relied on careful positioning of the sample on a surface. However, many nano-sized particles are non-crystalline, short-lived and very fragile. They may also suffer changes or damage during an experiment when positioned on a surface. Aerosols, exotic states of matter, and the smallest forms of life often fall into these categories and therefore are difficult to study with conventional imaging methods.

In a recent study featured on the March 2018 cover of Nature Photonics, researchers developed a new holographic method called in-flight holography. With this method, they were able to demonstrate the first X-ray holograms of nano-sized viruses that were not attached to any surface.

The patterns needed to create the images were taken at the Linac Coherent Light Source (LCLS), the X-ray free-electron laser at the Department of Energy’s SLAC National Accelerator Laboratory. Nanoviruses have been studied at LCLS without a holographic reference, but the interpretation of the X-ray images required many steps, relied on human input, and was a computationally challenging task.

In the new study, the authors superimposed scattered X-ray light from the virus with scattered X-ray light from a reference nano-sized sphere. The curvature in the superimposed images from the two objects provided depth information and details about the shape of the 450-nanometer-wide virus, the mimivirus. This technique greatly simplified the interpretation of the data.

“Instead of thousands of steps and algorithms that potentially don’t match up, you have a two-step procedure where you clearly get the structure out of your image,” says lead study author Tais Gorkhover, a Panofsky Fellow at SLAC and researcher at the Stanford PULSE Institute.

Now, the scientists can do their reconstruction of a sample in fractions of a second or even faster with the holographic method.

“Before our study, the interpretation of the X-ray images was very complicated and the structure of nanosamples was reconstructed long after the actual experiment using non-trivial algorithms,” says Christoph Bostedt, a scientist at the DOE’s Argonne National Laboratory and a co-author of the study. “With ‘in-flight’ holography, the procedure is very simple and in principle can be performed while taking data. This is a real breakthrough.”

“Another advantage of the in-flight holography method is that it is less prone to noise and to the artifacts that can appear in the detector compared to non-holographic X-ray imaging,” says Anatoli Ulmer, a co-author and PhD student from the Technical University of Berlin in Germany.

In the long run, the researchers predict that in-flight holography will offer new ways to study air pollution, combustion, and catalytic processes, all of which involve nanoparticles. 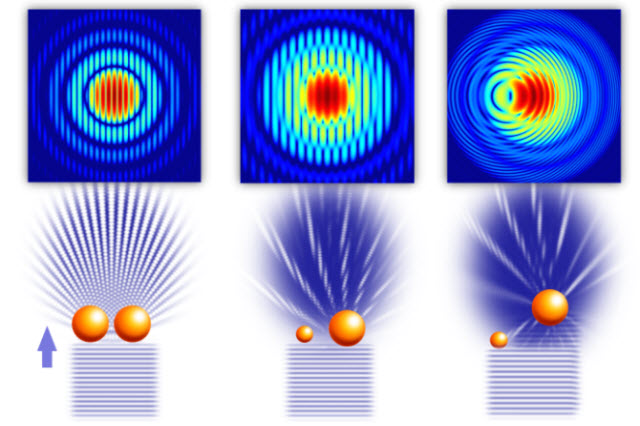 Illustration showing the principle of in-flight holography. (Left) The X-rays scatter off two spheres and form a characteristic diffraction pattern. The patterns are recorded using the very intense X-ray beam of SLAC’s X-ray laser, the Linac Coherent Light Source (LCLS). (Center) Changes in size and distance of the spheres are reflected in the patterns which can be directly translated from the diffraction alone. The smaller sphere can act as a holographic reference. (Right) If the spheres are shifted out of plane, the fine lines of the diffraction pattern become curved. The signatures of the position and size of the reference allow researchers to reconstruct the 3-D distances between the small sphere (reference) and the large sphere. Illustration credit: Anatoli Ulmer and Tais Gorkhover / The Technical University of Berlin and SLAC National Accelerator Laboratory

An international team of scientists from the DOE’s Lawrence Berkeley and Brookhaven national laboratories, the Chalmers University of Technology in Sweden, the Czech Academy of Science, Deutsches Elektronen-Synchrotron (DESY) in Germany, the Institute of Optics and Atomic Physics in Germany, the Institute for Solid State Physics and Optics in Hungary, KTH Royal Institute of Technology in Sweden, Northwestern University, and Uppsala University in Sweden also contributed to this research.

LCLS is a DOE Office of Science user facility.