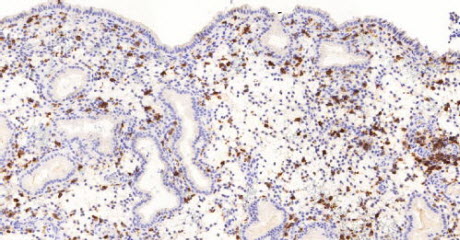 Researchers at the University of Warwick and University Hospitals Coventry and Warwickshire (UHCW) NHS Trust have discovered the role that they play in preparing the womb for pregnancy.

Although it has long been known that the lining of the womb harbours dynamic uterine natural killer cells, no functions have so far been given to these cells outside of pregnancy.

The new study, "Clearance of senescent decidual cells by uterine natural killer cells in cycling human endometrium," which is published in eLife shows two functions of the cells not previously known.

First the researchers discovered that the uterine natural killer cells remodel and refresh the lining of the womb at the time of embryo implantation. This is the first time a role for uterine natural killer cells in the lining of the womb has been identified outside of pregnancy. In addition they discovered that this process isn’t always balanced in each cycle.

The natural killer cells perform the role of targeting and clearing inflammatory stressed cells, thereby making space for the implanting embryo. However sometimes not enough of these cells are cleared away and sometimes too many are targeted and removed. Excessive inflammation or insufficient clearance by uterine natural killer cells makes miscarriage more likely. 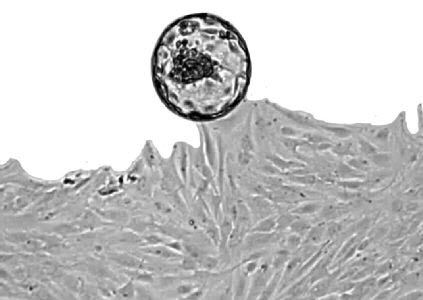 Image from a human embryo cultured with decidual cells in the lab.Image credit: University of WarwickLead author and professor Jan Brosens, who is based at the Division of Biomedical Sciences Warwick Medical School, said: “A good analogy is Swiss cheese: without holes, the embryo has nowhere to go which will cause implantation failure; but if the holes are too large, the tissue will physically collapse and lead to miscarriage.” This imbalance, which may be short-lived or last for multiple cycles, explains the high rate of early pregnancy failure, yet high cumulative live-birth rate that characterizes human reproduction.

Professor Jan Brosens added: “Patients suffering recurrent IVF failures or miscarriages, as well as their treating doctors, often refer to this phenomenon as the ‘numbers game.’”

The team of academics from the University’s Warwick Medical School and the Department of Computer Science, Juntendo University (Japan), the University of Cambridge and Duke-NUS Medical School (Singapore) received funding from Tommy's National Miscarriage Research Centre and UHCW NHS Trust. Their research is based on large amounts of experimental and observational data. They conducted an analysis of 2,111 endometrial biopsies, which is more than had ever been conducted previously. These were kindly donated by women who have attended the Implantation Research Clinic at UHCW NHS Trust.

The research team examined the acutely stressed (acutely senescent) cells in the lining of the womb which generate tissue inflammation that is needed for embryo implantation. They found that the natural killer cells which are in the womb perform the important function of selectively targeting and eliminating acutely stressed cells. They perform this as the cycle progresses. Also the researchers data suggest that acutely stressed cells in the lining of the womb are responsible for generating the elusive ‘implantation signal’ in the human uterus.

Brosens added: “We hope in the future this new information will be used to screen women at risk of reproductive failure. Furthermore, our findings suggest new treatment options for women suffering recurrent miscarriages or recurrent IVF failure.”