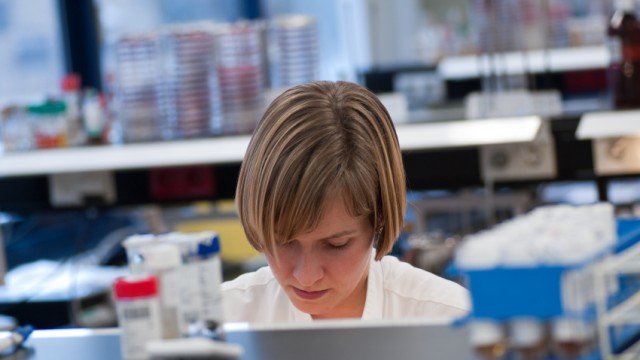 Previous research showed women receive lower startup funds from their universities to launch their research. This is the first study to show women get less money when they submit grants to the federal government.

The study was published March 5 in JAMA.

“If women are receiving less grant support from the very beginning of their career, they are less likely to succeed,” said co-corresponding author Teresa Woodruff, the Thomas J. Watkins Professor of Obstetrics and Gynecology at Northwestern University Feinberg School of Medicine and director of the Women’s Health Research Institute.“This shows women are disadvantaged from the very first NIH grant they submit relative to their male counterparts. This represents an early stumbling block of $41,000.”

“With less federal funding, women can’t recruit the same number of grad students to work on their research or buy the same amount of equipment as their male counterparts,” Woodruff said. “A funding disadvantage in the formative years of a woman scientist’s career can be especially handicapping because research shows that it is likely to snowball over time.”

“If you don’t have the right kind of grant from NIH, you are less likely to be promoted,” said co-corresponding author Brian Uzzi, professor of management and organizations at Kellogg. “The prestigiousness of a grant award are the things that make or break someone’s career.”

The backgrounds of the 53,000 first-time principal investigators in the study (57 percent men and 43 percent women) showed the men and women had statistically indistinguishable records prior to receiving their first NIH grant. They had published the same average number of articles, which received the same average number of citations across the same range of fields.“This means women are performing at a level on par with men, despite the fiscal disparity,” according to Woodruff.

Uzzi and Woodruff's team analyzed grant amounts to first-time female and male grant awardees from 2006 to 2017 from the NIH Principal Investigators database. They found:

Science suffers as a result of these inequities, Uzzi said.

“Having women in science increases the rate of discovery in science and the quality of science overall,” Uzzi said. “Women in science don’t only add to discovery by bringing in the brain power from the other half of the human race, but also the culture of science. So much of science today is done in teams, and women on teams promote different points of view, increasing our comprehension of problems whether in medicine, business organizations or education institutions.”

More Intense Predation in the Tropics Can Limit Marine Invasions

More Intense Predation in the Tropics Can Limit Marine Invasions