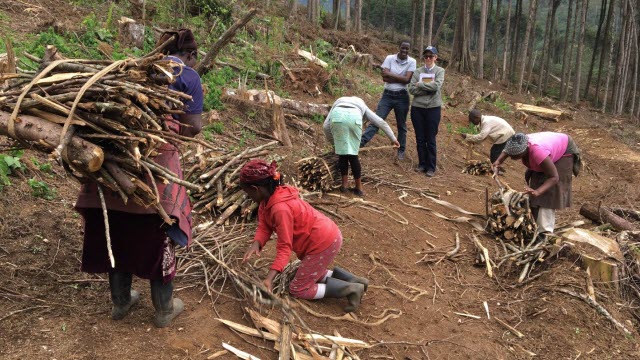 The researchers watch women in the Central Highlands of Kenya collect and carry downed wood from the national forest to be used for cooking. The wood residues were left after trees were harvested in a plantation within the forest. Wood fuels are by far the most widely used for cooking in sub-Saharan Africa. On the continent as a whole, more than 90 percent of the population relies on firewood or charcoal.Photo credit: James Gitau

Access to wood fuels for cooking must be considered when formulating policy to deal with food insecurity in sub-Saharan Africa, according to researchers who advocate expanding the effort to improve wood-fuel systems and make them more sustainable.

Although the health risks of collecting and using firewood and charcoal in traditional ways are real, policy makers, researchers, and donors need to address the sustainability and viability of the biomass used by the majority of people, according to Ruth Mendum, director of gender initiatives in the Office of International Programs, College of Agricultural Sciences, Penn State. She collaborated with Mary Njenga, a research scientist who specializes in bioenergy at the World Agroforestry Centre in Kenya.

Firewood collection in African society is a gender issue because it is done almost exclusively by women, noted Mendum, who said inadequate sources of cooking energy contribute to food insecurity, particularly for very low income, food-insecure individuals. She believes that that reality has been overlooked intentionally by decision-makers in countries such as Ethiopia, Kenya, Nairobi, Tanzania, and Zambia in their efforts to advocate for progressive cooking energy.

"It's not always a question of money—in many cases people simply prefer cooking with wood," she said. "But we have literally been in places where people have food but don't have a way to cook it. It is an uncomfortable issue but it's an issue we need to understand better and learn how to make wood burning for cooking sustainable."

Wood fuels are by far the most widely used for cooking in sub-Saharan Africa. On the continent as a whole, more than 90 percent of the population relies on firewood or charcoal. Charcoal is mostly used in urban centers while firewood is the predominant form of wood fuel used in rural areas. But because wood burning is seen as outdated and environmentally unfriendly, governments have tried to persuade their citizens to use other fuels, such as liquefied natural gas and electricity.

Despite those efforts, the use of wood fuels is rising due to population growth and emerging urbanization trends, the researchers point out. For example, a 1 percent rise in urbanization has been linked to a 14 percent rise in charcoal consumption. They recommend that energy availability for household use—specifically wood fuels—should be added to the short list of essential drivers of food insecurity in sub-Saharan Africa.

"Before policy makers can integrate energy considerations into food security interventions, it is necessary to consider the state of wood fuel research and how it might be expanded to better serve social needs," Mendum said. "If we ignore this practice of wood burning, which is so widespread, particularly among the continent's poorest people, we risk putting together solution steps for food security that are not effective."

After poring over the literature, Mendum and Njenga reported that little previous empirical research into wood burning in sub-Saharan Africa has been conducted, so policy makers have scant data to guide them in formulating best practices for sustainable biomass production and consumption. In their study, published this month in Facets, they have some recommendations.

They suggest creating financial policy to support wood-burning systems and developing agroforestry to ease the burden on wood gatherers. In rural areas, encourage the planting of trees and then pruning them to use the branches for firewood. As a result, more trees would be in place and people could care for trees and collect firewood on their own properties instead of carrying it long distances.

"That means all the negative impacts of hauling wood on women's backs would be eliminated," Mendum said.

They also recommend conducting more research on the complex issues that connect the use of women's time, environmental degradation, and competition for agricultural nutrients. There are a host of other factors surrounding wood-fuel energy use in sub-Saharan Africa that remain poorly understood, Mendum said.

This research gap will not be filled as long as wood-fuel use remains ignored because the assumption is being made that a 21st-century economy must move up the energy ladder, the researchers concluded. Wood fuel is widely used, it has a long history of use, and there are food cultural barriers, widespread poverty, and daunting geographic conditions that make other forms of fuel unpopular or unavailable.

"We shouldn't wait until we know the exact nutritional or agricultural productivity impacts of wood-fuel use—that's information that we may never have the capacity to fully collect," Mendum said. "It is important to expand the work being done on improving wood-fuel systems with clear attention paid to the impacts of such improvements on food security and agricultural productivity."