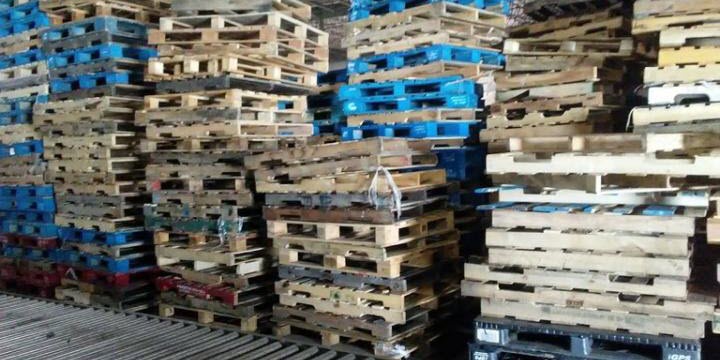 There are about 700 million pallets produced and recycled each year in the United States alone, according to Penn State Researchers, and there are 4 billion pallets in use in this country.
Penn State

Weighing in on a debate that has raged for decades, Penn State researchers, after conducting a series of ultra-detailed comparisons, have declared that shipping pallets made of wood are slightly more environmentally friendly and sustainable than those made of plastic.

"Few people realize the significance of this issue—there are about 700 million pallets produced and recycled each year in the United States alone," said Chuck Ray, associate professor of ecosystem science and management in the College of Agricultural Sciences. "There are 4 billion pallets in use in this country."

Researchers compared the long-term performance of treated wooden and plastic pallets through a detailed, cradle-to-grave life-cycle assessment, and conducted an analysis of treatments required to kill pests such as insects. They investigated and evaluated the environmental impacts of resources consumed and emissions released by wooden and plastic pallets throughout their life cycles.

In the study, the environmental impacts of the pallets were compared on a one-trip basis and 100,000-trips basis, under nine impact categories chosen by researchers because of their environmental relevance. The categories included influence on ozone layer depletion, respiratory organics, aquatic ecotoxicity, terrestrial ecotoxicity, land occupation, aquatic acidification, aquatic eutrophication, global warming, and non-renewable energy.

In findings published Feb. 3 in the Journal of Industrial Ecology, the researchers show that on a one-trip basis, wooden pallets treated with conventional kiln heating and as-yet novel, radio-frequency heat treatment incur an overall carbon footprint that is slightly lower than plastic pallets during their life cycle. For the 100,000-trips comparison, the differences are even more significant, they reported.

"It should be noted that wooden pallets that are heat-treated to kill pests incur a carbon footprint 20 to 30 percent lower than those treated with methyl bromide fumigation," Ray said. "Methyl bromide gas has been blamed for depleting the Earth's ozone layer. And theoretical calculations of the resource consumption and emissions of radio-frequency treatment of pallets suggest that the new dielectric technology may provide a lower-carbon alternative to both conventionally treated wooden pallets or plastic pallets."

Related Article: Squid Could Provide an Eco-Friendly Alternative to Plastics 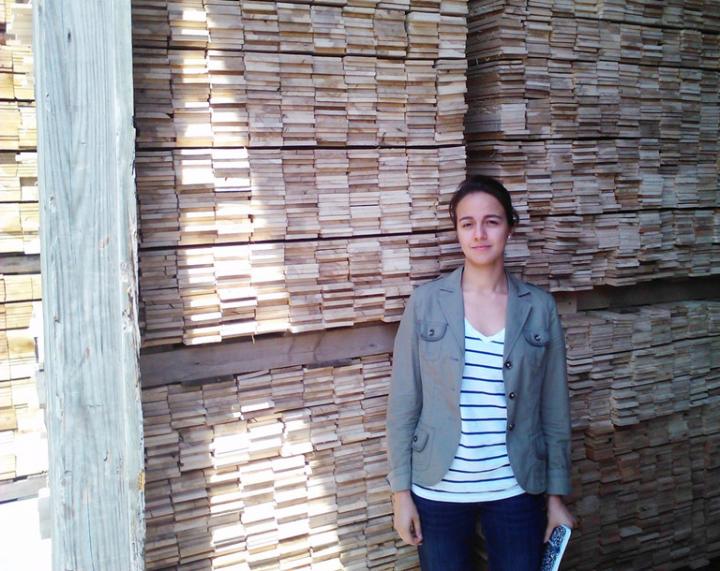 Researcher Shahidi Shirin, a graduate student in the Department of Ecosystem Science and Management, Penn State, when the study was done, pauses before a pile of wood used for pallets. Forty percent of all hardwood harvested in this country goes into pallet production, researchers say.
Penn State

Molded plastic pallets, typically, have a much longer life cycle than wooden pallets because plastic pallets are usually not broken or damaged and normally can travel more than 200 round trips before being taken out of service, Ray noted. Plastic pallets are made of sturdy, hardened material and are built to last longer. But they are typically derived from petroleum or natural gas products, which greatly increases their carbon footprint.

"What was lacking in this whole arena was a comprehensive life-cycle analysis, and that is what this study provides," Ray said. "More than a decade ago, other studies were commissioned by the wood pallet industry and by the plastic pallet industry, and of course those results favored the funders. This is the first academic, peer-reviewed study related to pallets, and it was funded entirely by Penn State and is unbiased."

With current concerns about climate change and in view of the massive amount of resources consumed to make many millions of pallets, assessing their carbon footprint is important, Ray believes. With 40 percent of all hardwood produced in the United States going into pallet production, he added, it is critical to know if wooden pallets are ecologically acceptable.

"Because I have worked my whole career in the wood products industry, I have gained a special appreciation for the benefits of wood as an environmentally friendly product," said Ray. "The topic interests me. It did not occur to me to do this research until the plastic pallet industry started talking about their products as environmentally superior. I questioned that statement and decided to do life-cycle analyses."