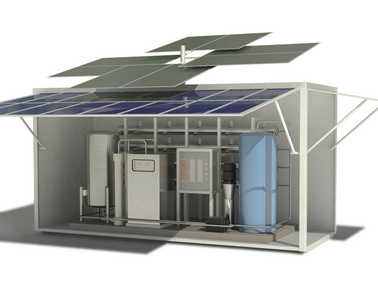 ASU will play a leading partnership role in the Nanotechnology Enabled Water Treatment Systems (NEWT) Center. The center is focused on developing compact, mobile, off-grid water treatment systems that can provide clean water to millions of people who lack it. Photo credit: NEWT/Rice UniversityArizona State University was today (Aug. 10) awarded its second Engineering Research Center from the National Science Foundation, making it one of only two universities in the nation to lead two of the prestigious centers.

NSF announced that ASU will lead the $18.5 million Center for Bio-mediated and Bio-inspired Geotechnics (CBBG), which will pioneer advances to solve some of the world’s biggest environmental and infrastructure development problems.

For example, the center will aim to make soil stronger so that building foundations can better withstand earthquakes.

The coveted distinction of leading two Engineering Research Centers places ASU among the country’s top research institutions in advancing innovation and discovery designed to benefit people around the globe.

“This recognition and support from the NSF underscores ASU’s rapid rise over the past decade to a leadership position in science and technology at the national level,” said Sethuraman “Panch” Panchanathan, senior vice president for Knowledge Enterprise Development at ASU. “ASU’s New American University model, with its interdisciplinary approach to solving complex challenges, has led to increasing success in pursuing large-scale, highly competitive awards such as the Engineering Research Centers.”

Today’s announcement was part of the NSF’s announcement of three new centers across the United States, with Arizona State University figuring prominently in two of them.

ASU already leads the Quantum Energy and Sustainable Solar Technologies (QESST) Center, which was awarded in 2011 and recently renewed by the NSF and the Department of Energy. The center focuses on advancing photovoltaic solar cell science, technology and education — essentially improving all aspects of solar energy.

North Carolina State University is the only other university to lead two NSF Engineering Research Centers.

And only six other universities have both leadership and partnership roles in multiple ERCs. ASU now joins a distinguished group of institutions that, in addition to NC State, includes: Stanford, Rice, Berkeley, UCLA and RPI.

Additionally today, the NSF announced that ASU will play a leading partnership role in a third center, the Nanotechnology Enabled Water Treatment Systems (NEWT) Center. The center is focused on developing compact, mobile, off-grid water treatment systems that can provide clean water to millions of people who lack it. Such technology could aid locations ranging from rural communities to remote outposts to disaster zones.

NEWT will be led by and based at Rice University and brings together experts from ASU, Rice, the University of Texas at El Paso and Yale University to work with more than 30 partners, including Shell, Baker Hughes, UNESCO, the U.S. Army Corps of Engineers and NASA.

Engineering Research Centers are interdisciplinary entities involving multiple universities and other institutions. They are a collaboration of academia, industry and government partnering to produce technology that changes the world, as well as innovative-minded engineering graduates capable of leading in the global economy.

ASU’s Center for Bio-mediated and Bio-inspired Geotechnics will focus on expanding the emerging field of biogeotechnical engineering, led by Edward Kavazanjian, Regents’ Professor and Ira A. Fulton Professor of Geotechnical Engineering. In addition to earthquake resilience, researchers want to look into such things as how trees stabilize soil and apply their analyses to prevent erosion around building foundations or critical infrastructure, such as water and power systems.

Georgia Institute of Technology, New Mexico State University and the University of California-Davis are partners in the new center. A number of agencies that manage large public infrastructure systems — including the Arizona and New Mexico transportation departments, the Los Angeles Department of Water and Power and the Port of Los Angeles — have also agreed to collaborate with the center.

“This new award is further evidence that ASU stands out as a national leader in cutting-edge interdisciplinary research that breaks down the traditional silos found in academia to bring forward innovative solutions for critical global problems,” said Mitch Horowitz, vice president and managing director of Battelle’s Technology Partnership Practice, a leading national science and technology consulting arm of the world’s largest independent, non-profit research and development organization. “Just as important, ASU brings a strong translational focus with its faculty, students and staff working collaboratively with industry to speed up the process of moving these interdisciplinary research innovations from the laboratory to application, and that is now getting further national recognition with this new Engineering Research Center.”

The announcement of ASU’s new ERCs follows on the heels of other awards that underscore ASU’s national standing as a top-tier research university. Recently, NASA awarded ASU a contract to build an instrument for an upcoming probe that will search for signs of life on Jupiter’s moon, Europa. ASU recently shipped another instrument that was designed, built and tested on the Tempe campus that will be sent to the asteroid Bennu. The development of the instruments makes ASU among only a handful of institutions capable of producing such NASA technology.

The university made national headlines last year when plant biologist Charlie Arntzen played a key role in the development of ZMapp, an experimental treatment for Ebola that helped save the lives of two American doctors. In the same year, ASU ranked in the top 50 among all universities in the world for its number of new patents.

The recent successes cap a decade in which ASU’s research enterprise has tripled to more than $425 million.

“Major researchers and industry partners look to ASU for new technologies that will advance innovation and significantly contribute to local and national economic development,” Panchanathan said.

ASU will continue its partner leadership role in the Future Renewable Electric Energy Delivery Management Systems (FREEDM) Engineering Research Center, which is pursuing advances in renewable electric power. FREEDM is led by and based at North Carolina State University.

The leadership roles in a total of four Engineering Research Centers puts ASU in a prominent, trailblazing role that will draw researchers and support for years to come.