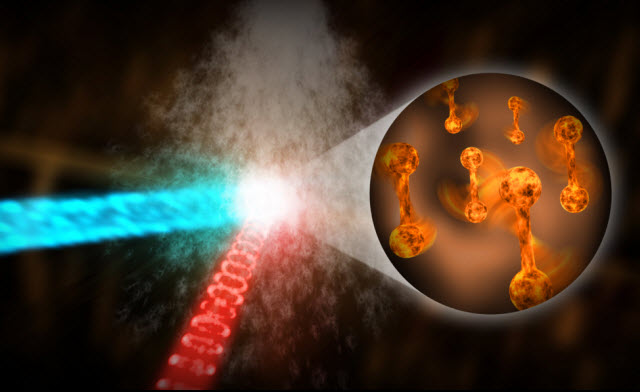 Researchers have taken the world’s fastest “electron images” of rotating nitrogen molecules with SLAC’s new instrument for ultrafast electron diffraction (UED), demonstrating the technology’s potential for making real-time molecular movies of chemical reactions. In their experiment, the scientists first aligned the molecules, in which two nitrogen atoms are connected via a strong chemical bond, with laser light (red). Then they probed the subsequent rotation of the molecules by taking ultrafast snapshots with an electron beam (blue).Image Courtesy of: SLAC National Accelerator Laboratory

Scientists have made a significant advance toward making movies of extremely fast atomic processes with potential applications in energy production, chemistry, medicine, materials science and more. Using a superfast, high-resolution “electron camera,” a new instrument for ultrafast electron diffraction (UED) at the Department of Energy’s SLAC National Accelerator Laboratory, researchers have captured the world’s fastest UED images of nitrogen molecules rotating in a gas, with a record shutter speed of 100 quadrillionths of a second.

Scientists have long dreamed of watching nature’s smallest and speediest phenomena in real time. For instance, watching biomolecules facilitate life-sustaining chemical reactions at high speed and in atomic detail could teach scientists new ways of producing efficient chemical catalysts. However, most available techniques excel at speed or detail, not both.

“Our new UED instrument can do both: It achieves an unprecedented combination of atomic resolution and extraordinary speed,” said researcher Xijie Wang, SLAC’s UED team lead and co-author of a new study published today in Nature Communications. “We’ve taken UED snapshots of atomic motions in gases faster than ever before and demonstrated the technology’s potential for making molecular movies of chemical reactions.”

UED uses a focused beam of highly energetic electrons to probe samples—in this case, a stream of laser-excited nitrogen gas. Gases are ideal model systems for studying processes in chemistry. Electrons scatter off atoms in the sample and generate a pattern on a detector that researchers use to determine where the sample’s atoms are located. By varying the time between the laser excitation and the electron beam, which comes in very short electron bundles, scientists can track rapid changes in the pattern that correspond to quick motions of the atoms.

While the technique itself is not new—UED has been under development by several groups throughout the world since the 1980s—it has never been done at this speed for gases.

“When it comes to studies of gases, SLAC’s instrument is about five times faster than any other UED machine before,” said Jie Yang from the University of Nebraska, Lincoln, who led the study with Markus Guehr, a researcher at SLAC and at Potsdam University in Germany. “This leap in performance is due to the instrument’s superior high-energy electron source, which was originally developed for SLAC’s LCLS. It will help us better understand a whole new range of speedy processes on the atomic level.”

In the new study, the research team demonstrated the instrument’s superb performance by capturing the rapid rotation of nitrogen molecules in a gas.

Each molecule consists of two nitrogen atoms connected via a strong chemical bond. As the molecules in the gas tumble around, they normally point in random directions. But hitting them with an extremely short laser pulse makes them briefly all point in the same direction. Although they quickly fall out of alignment, they periodically line up again in a sort of “molecular echo.”

“When the nitrogen molecules do line up again, they also rapidly switch from pointing in one direction to pointing in the perpendicular direction,” Yang said. “This transition takes only 300 quadrillionths of a second.” The team was able to capture this process because the “shutter speed” of the UED instrument was three times faster than the changes in alignment.

Guehr said, “The entire process had been studied with other methods before, but our research is the first to visualize it both in real time and with a resolution detailed enough to separate the positions of the two nitrogen nuclei in the molecules.”

Toward Movies of Chemistry in Action

The researchers hope to use the technology in the near future to film molecules as they vibrate and watch chemical bonds break and form during chemical reactions.

“We are also looking forward to combining UED with complementary ultrafast studies at LCLS,” Wang said. “Electrons tell us about a material’s structure, whereas X-rays tell us more about its function. Putting both together will give us a more complete picture in groundbreaking studies of all kinds of complex dynamic processes in nature.”

The research was supported by the DOE Office of Science, the SLAC UED/UEM Initiative Program Development Fund and the National Science Foundation.