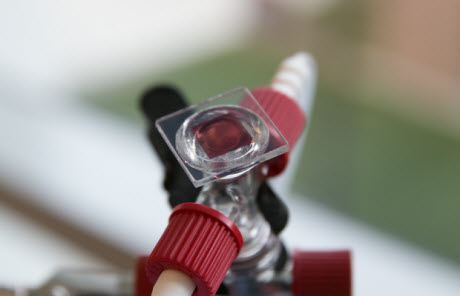 In the Journal of the American Chemical Society, they report that their patent-pending design—which combines a solar cell and a battery into a single device—now achieves a 20 percent energy savings over traditional lithium-iodine batteries.

The 20 percent comes from sunlight, which is captured by a unique solar panel on top of the battery, explained Yiying Wu, professor of chemistry and biochemistry at Ohio State.

The solar panel is now a solid sheet, rather than a mesh as in the previous design. Another key difference comes from the use of a water-based electrolyte inside the battery.

Because water circulates inside it, the new design belongs to an emerging class of batteries called aqueous flow batteries. 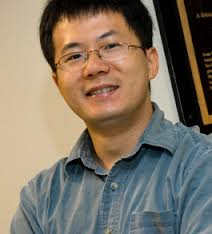 As such, it is the first aqueous flow battery with solar capability. Or, as Wu and his team have dubbed it, the first “aqueous solar flow battery.”

Researchers around the world are working to develop aqueous flow batteries because they could theoretically provide affordable power grid-level energy storage someday.

The solar flow battery could thus bridge a gap between today’s energy grid and sources of renewable energy.

"This solar flow battery design can potentially be applied for grid-scale solar energy conversion and storage, as well as producing ‘electrolyte fuels’ that might be used to power future electric vehicles,” said Mingzhe Yu, lead author of the paper and a doctoral student at Ohio State.

Previously, Yu designed the solar panel out of titanium mesh, so that air could pass through to the battery. But the new aqueous flow battery doesn’t need air to function, so the solar panel is now a solid sheet.

The solar panel is called a dye-sensitized solar cell, because the researchers use a red dye to tune the wavelength of light it captures and converts to electrons. Those electrons then supplement the voltage stored in the lithium-anode portion of the solar battery.

Something has to carry electrons from the solar cell into the battery, however, and that’s where the electrolyte comes in. A liquid electrolyte is typically part salt, part solvent; previously, the researchers used the salt lithium perchlorate mixed with the organic solvent dimethyl sulfoxide. Now they are using lithium iodide as the salt, and water as the solvent. (Water is an inorganic solvent, and an eco-friendly one. And lithium iodide offers a high-energy storage capacity with low cost.)

In tests, the researchers compared the solar flow battery’s performance to that of a typical lithium-iodine battery. They charged and discharged the batteries 25 times. Each time, both batteries discharged around 3.3 volts.

The project is still ongoing, and the solar flow design will undoubtedly evolve again as the researchers try to make the battery more efficient.

Doctoral student and study co-author Billy McCulloch said that there are many different directions the research could take.

“We hope to motivate the research community to further develop this technology into a practical renewable energy solution,” he added.

The team’s ultimate goal is to boost the solar cell’s contribution to the battery past its current 20 percent—maybe even to 100 percent.

“That’s our next step,” Wu said, “to really achieve a fully solar-chargeable battery.”

This research was funded by the Department of Energy.