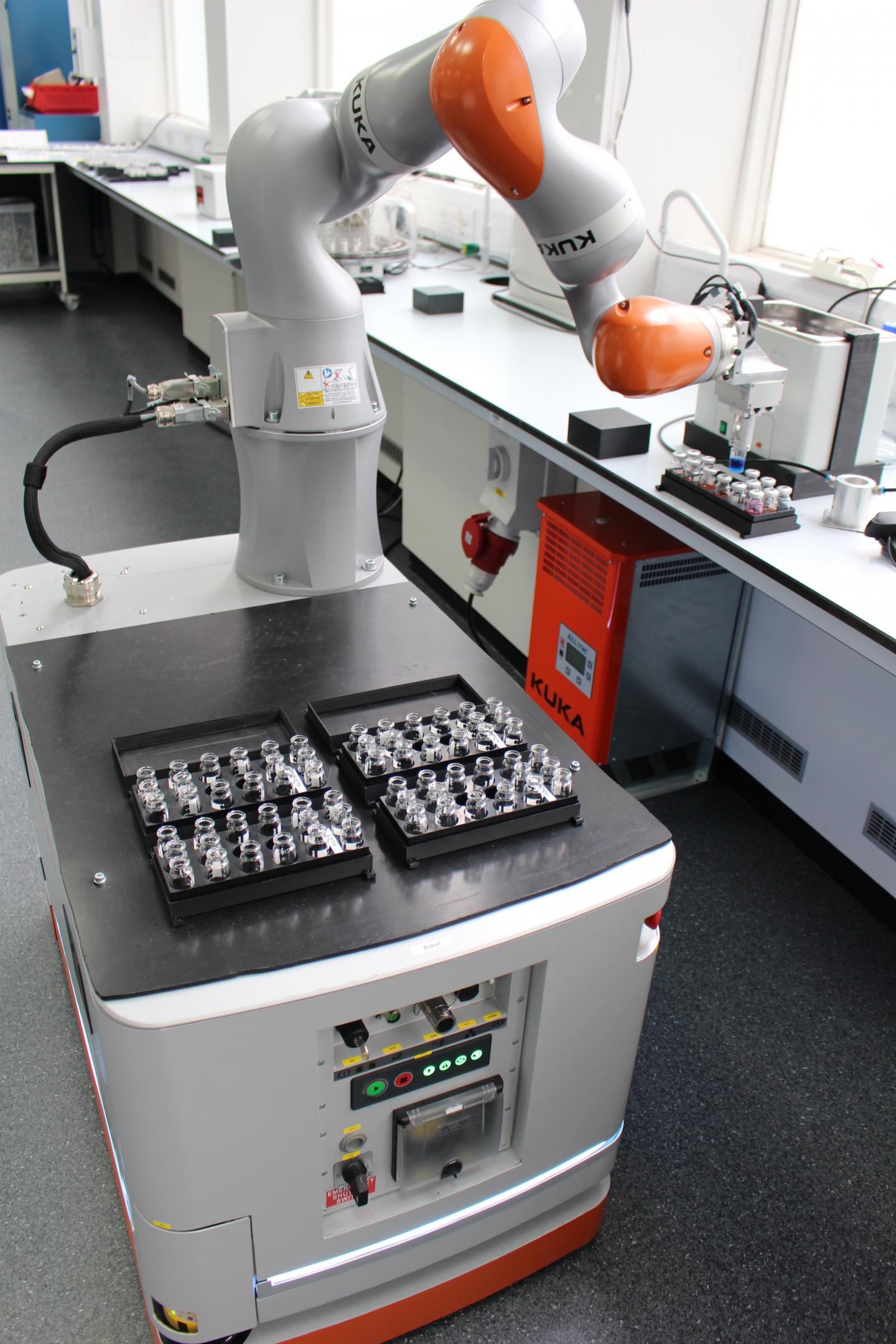 Researchers at the University of Liverpool have built an intelligent mobile robot scientist that can work 24/7, carrying out experiments by itself.

The robot scientist, the first of its kind, makes its own decisions about which chemistry experiments to perform next, and has already discovered a new catalyst.

It has humanoid dimensions and works in a standard laboratory, using instruments much like a human researcher does.

However, unlike a human, this 400 kg robot has infinite patience, can think in 10 dimensions, and works for 21.5 hours each day, pausing only to recharge its battery.

Reported in the journal Nature and featured on the front cover, this new technology could tackle problems of a scale and complexity that are currently beyond our grasp. For example, autonomous robots could find materials for clean energy production or new drug formulations by searching vast, unexplored chemical spaces.

Robots have been used before in chemistry research, but they are typically hardwired to a specific experiment. This 1.75-meter tall robot is mobile and can roam around the laboratory, performing a wide range of different tasks.

It can work with equipment designed for human operation because of its human-like dimensions and physical reach. It uses a combination of laser scanning coupled with touch feedback for positioning, rather than a vision system.

"The biggest challenge was to make the system robust," said University of Liverpool PhD student Dr. Benjamin Burger, who built and programmed the robot. "To work autonomously over multiple days, making thousands of delicate manipulations, the failure rate for each task needs to be very low. But once this is done, the robot makes far fewer mistakes than a human operator."

In the first published example, the robot conducts 688 experiments over eight days, working for 172 out of 192 hours. To do this, it makes 319 moves, completes 6,500 manipulations, and travels a total distance of 2.17 km.

The robot independently carries out all tasks in the experiment such as weighing out solids, dispensing liquids, removing air from the vessel, running the catalytic reaction, and quantifying the reaction products.

The robot's brain uses a search algorithm to navigate a 10-dimensional space of more than 98 million candidate experiments, deciding the best experiment to do next based on the outcomes of the previous ones. By doing this, it autonomously discovered a catalyst that is six times more active, with no additional guidance from the research team.

"Our strategy here was to automate the researcher, rather than the instruments," said project leader and professor Andrew Cooper from the university's Department of Chemistry and Materials Innovation Factory in Liverpool. "This creates a level of flexibility that will change both the way we work and the problems we can tackle. This is not just another machine in the lab: it's a new superpowered team member, and it frees up time for the human researchers to think creatively."