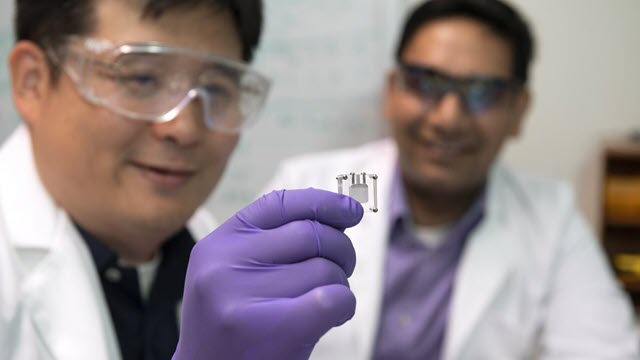 Researchers at Washington State University have developed an implantable, biofuel-powered sensor that runs on sugar and can monitor a body's biological signals to detect, prevent, and diagnose diseases.

A cross-disciplinary research team led by Subhanshu Gupta, assistant professor in WSU's School of Electrical Engineering and Computer Science, developed the unique sensor, which, enabled by the biofuel cell, harvests glucose from body fluids to run.

The research team has demonstrated a unique integration of the biofuel cell with electronics to process physiological and biochemical signals with high sensitivity.

Their work recently was published in the IEEE Transactions of Circuits and Systems journal.

Professors Su Ha and Alla Kostyukova from the Gene and Linda School of Chemical Engineering and Bioengineering led design of the biofuel cell.

Many popular sensors for disease detection are either watches, which need to be recharged, or patches that are worn on the skin, which are superficial and can't be embedded. The sensor developed by the WSU team could also remove the need to prick a finger for testing of certain diseases, such as diabetes.

"The human body carries a lot of fuel in its bodily fluids through blood glucose or lactate around the skin and mouth," said Gupta. "Using a biofuel cell opens the door to using the body as potential fuel."

The electronics in the sensor use state-of-the-art design and fabrication to consume only a few microwatts of power while being highly sensitive. Coupling these electronics with the biofuel cell makes it more efficient than traditional battery-powered devices, said Gupta. Since it relies on body glucose, the sensor's electronics can be powered indefinitely. So, for instance, the sensor could run on sugar produced just under the skin.

Unlike commonly used lithium-ion batteries, the biofuel cell is also completely non-toxic, making it more promising as an implant for people, he said. It is also more stable and sensitive than conventional biofuel cells.

The researchers say their sensor could be manufactured cheaply through mass production, by leveraging economies of scale.

While the sensors have been tested in the lab, the researchers are hoping to test and demonstrate them in blood capillaries, which will require regulatory approval. The researchers are also working on further improving and increasing the power output of their biofuel cell.

"This brings together the technology for making a biofuel cell with our sophisticated electronics," said Gupta. "It's a very good marriage that could work for many future applications."