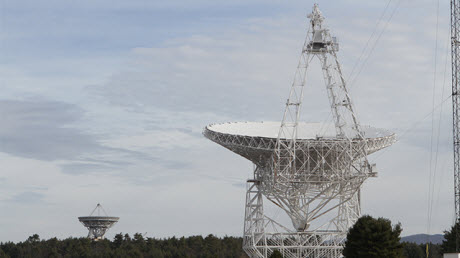 The WVU Center for Gravitational Waves and Cosmology launched in August, and brings together researchers from the departments of physics and astronomy, mathematics, the Lane Department of Computer Science and Electrical Engineering, and the National Radio Astronomy Observatory in Green Bank.

Director Maura McLaughlin said the center’s research largely focuses on the detection of gravitational waves, which are invisible ripples in the fabric of spacetime that were predicted by Einstein in his theory of general relativity. Although the waves have yet to be detected, research is intensifying and researchers believe they are close to detecting them.

Researchers at the WVU center are utilizing the Green Bank Telescope to conduct their observations. Partnerships with researchers in computer science and electrical engineering allow the center to process large volumes of data from the telescope, she said.

Other work involves the use of different telescopes or various other ways of studying the universe. Partnerships with researchers in mathematics fosters the development of templates for detecting gravitational wave sources with interferometers, such as the Laser Interferometer Gravitational Observatory, called LIGO.

Taking a multidisciplinary approach to research is a growing trend in all scientific fields, McLaughlin said.

“The new center at WVU should make WVU researchers more competitive globally by fostering these types of collaborations,” she said.

The center is funded by the WVU Research Corp., the participating departments and awards from the National Science Foundation.