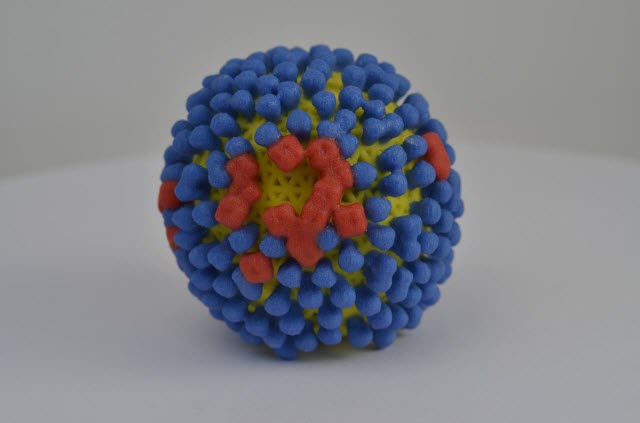 This is a 3-D print of influenza virus. The virus surface (yellow) is covered with proteins called hemagglutinin (blue) and neuraminidase (red) that enable the virus to enter and infect human cells. In this study, Worobey and his collaborators show that the type of flu virus we first are exposed to as children determines which types we are protected from for the rest of our lives.Photo credit: National Institutes of Health

Your birth year predicts—to a certain extent—how likely you are to get seriously ill or die in an outbreak of an animal-origin influenza virus, according to a study co-led by researchers from the University of Arizona in Tucson and the University of California, Los Angeles.

Until now, it was believed that previous exposure to a flu virus conferred little or no immunological protection against new influenza viruses that can jump from animals into humans. The results, to be published in Science on Nov. 11, could hold important clues for public health measures aimed at curbing the risks of a major flu outbreak.

"Even a comparatively weak, mild pandemic flu event like the 2009 H1N1 (swine flu) outbreak is a trillion-dollar affair," said Michael Worobey, head of the UA's Department of Ecology and Evolutionary Biology and one of the two senior authors of the study. "A major pandemic like the one we saw in 1918 has the potential to kill large numbers of people and shut down the world's economy."

The research team studied two avian-origin influenza A ("bird flu") viruses, H5N1 and H7N9, each of which already has caused hundreds of spillover cases of severe illness or death in humans. Both strains are of global concern because they might at some point gain mutations that allow them not only to readily jump from birds into humans, but also spread rapidly between human hosts.

Analyzing data from every known case of severe illness or death from influenza caused by these two strains, the researchers discovered that whichever human influenza strain a person happened to be exposed to during his or her first infection with flu virus as a child determines which novel, avian-origin flu strains they would be protected against in a future infection. This effect of "immunological imprinting" appears to be exclusively dependent on the very first exposure to flu virus encountered in life—and difficult to reverse.

When an individual gets exposed to flu virus for the first time, the immune system makes antibodies targeting hemagglutinin, a receptor protein shaped like a lollipop that sticks out from the virus surface. Like lollipops that come in different colors and flavors, influenza viruses differ from each other in the parts that make up their hemagglutinins. But each of the 18 known influenza A virus hemagglutinin subtypes falls into one of just two main "flavor" groups.

"In this analogy, let's say you were first exposed to a human 'orange lollipop' flu as a kid," Worobey said. "If later in life you encounter another subtype of flu virus, one from a bird and one that your immune system has never seen before but whose proteins also are of a similar 'orange' flavor, your chances of dying are quite low because of cross-protection. But if you were first infected with a virus from the 'blue lollipop' group as kid, that won't protect you against this novel, 'orange' strain."

The results provide a functional explanation for a pattern that had vexed epidemiologists for a long time: Why are certain age groups more likely than others to suffer serious or even fatal complications from an infection with novel influenza strains?

"All sorts of possibilities have been put forth," Worobey said, "and here my colleagues from UCLA and I present a strong result showing that whatever other minor factors are at play, there is one really major one, and that is—surprise, surprise—we're not a completely blank slate when it comes to how susceptible we are to these emerging flu viruses. Even if we've never been exposed to H5 or H7 viruses, we have some kick-ass protection against one or the other."

All 18 subtypes of influenza A virus hemagglutinin circulate in non-human hosts, primarily birds. But only three—H1, H2 and H3—have circulated in humans over the last century. Until now, there has been no way to predict which of the 18 subtypes might cause the next flu pandemic by successfully jumping from animals, and which age groups would be most at risk if this happened. The new study provides insights on both counts by revealing that immunological cross-protection appears to exist within each major branch of the evolutionary tree of influenza A. One branch includes human H1 and H2 viruses as well as avian H5, while the other includes human H3 and avian H7.

In the lollipop analogy, people born before the late 1960s were exposed to "blue lollipop" influenza as children (H1 or H2). The researchers found that these older groups rarely succumb to avian H5N1—which shares a "blue" hemagglutinin—but often die from "orange" H7N9. People born after the late 1960s and exposed to "orange lollipop" influenza as children (H3) show the mirror-image pattern: They are protected from H7N9 but suffer severe disease and death when exposed to H5 viruses mismatched to their childhood exposure.

Based on previous work, Worobey thinks that a similar process may explain the unusual mortality patterns caused by the 1918 flu pandemic, which was more deadly among young adults.

"When I was finishing up that work and looking at the age patterns, I noticed something interesting," he said. "Those young adults were killed by an H1 virus, and from blood analyzed many decades later there is a pretty strong indication that those individuals had been exposed to a mismatched H3 as children and were therefore not protected against H1.

Related Article: Influenza Viruses Can Hide from the Immune System

"The fact that we are seeing exactly the same pattern with current H5N1 and H7N9 cases suggests that the same fundamental processes may govern both the historic 1918 pandemic and today's contenders for the next big flu pandemic."

"If either of these viruses were to successfully jump from birds into humans, we now know something about the age groups that they would be hit the hardest," Worobey said, adding that efforts to develop a universal flu vaccine hinge on such insights because "such a vaccine would likely target the same conserved protein motifs on the virus surface that underlie this age-specific pattern."

Based on these findings, Worobey said future research should try to elucidate the exact mechanism underlying the immunological imprinting and finding out possible ways to modify it with a vaccine.

"In a way it's a good-news, bad-news story," he said. "It's good news in the sense that we can now see the factor that really explains a big part of the story: Your first infection sets you up for either success or failure in a huge way, even against 'novel' flu strains. The bad news is the very same imprinting that provides such great protection may be difficult to alter with vaccines: A good universal vaccine should provide protection where you lack it most, but the epidemiological data suggest we may be locked into strong protection against just half of the family tree of flu strains."