A school-based scientific study in Italy, Austria, Germany, Slovenia, Mauritius, and Japan shows that young people know too little about reciprocal disease transmission from animals to humans (zoonoses) and the integrative management of health risks (One Health concept). The results of the international study were published in the scientific journal Frontiers in Public Health.

The EU-funded BIO-CRIME project—with support from the Leibniz Institute for Zoo and Wildlife Research (Leibniz-IZW)—conducted a scientific investigation on the topic of illegal small animal trade and the associated risk of pathogen transmission.

The study focused on the key areas of the illegal small animal trade and the level of knowledge and proper behaviors of young people and adolescents with zoonotic diseases and the One Health concept. One Health is an approach that recognizes that human health is closely linked to the health of animals and our shared environment.

A total of 656 students from six countries participated in the survey. The students answered an anonymous questionnaire, followed by a theoretical and practical lesson that resolved the correct results of the survey. After four weeks—in the meantime the students had further studied the topic of zoonoses and the One Health approach—a second theoretical-practical lesson was conducted. Immediately afterwards, the same questionnaire was answered anonymously a second time.

The result of the first questionnaire response showed that the percentage of students who did not know that animals can transmit many diseases to humans and vice versa was 28.96 percent. The percentage of participants who did not know what a zoonosis is was 32.16 percent. Ignorance about the One Health concept was 31.40 percent among the young people, respectively was answered incorrectly by 59.91 percent of the students, furthermore rabies was considered as a non-dangerous disease by 23.02 percent of the participants.

After the two theoretical-practical lessons of the first survey, the same questionnaire was filled out again to conclude the knowledge transfer process. The result, the percentage of correct answers (knowledge increase) increased by 21.92 percent.

Depending on gender and country, there were different expressions in the correctness of the answered questions. Overall, however, a pronounced lack of knowledge about zoonotic risks and a lack of understanding about the contents of the One Health concept were present in more than one third of the participating students in this study.

"This is a public health problem that needs to be addressed. It means that more than one third of the students participating in the study are not aware of the zoonotic risk they run when they come into contact with animals from the illegal small animal trade. Therefore, I recommend that education about zoonotic diseases and the One Health concept be firmly anchored in school curricula and syllabi by means of theoretical-practical teaching units," explains project leader and first author Paolo Zucca, from the Central Directorate for Health, Social Policies and Disabilities, in Italy. 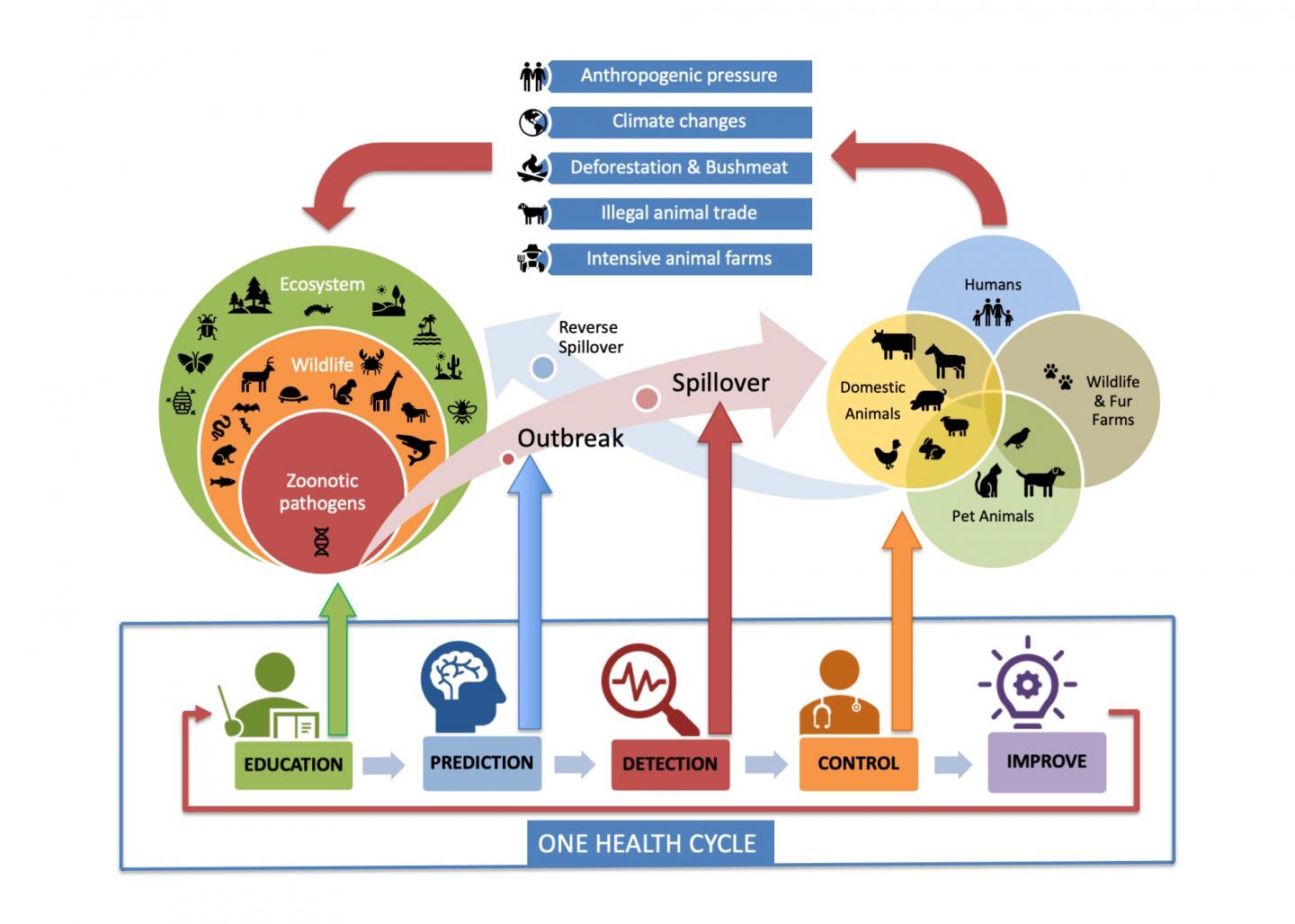 The One Health Cycle explains how the management of a zoonotic spillover with a One Health approach works. A zoonotic pathogen from wild animals moves into livestock, pets, fur animals, or directly to humans. The One Health approach introduces the processes of early education (green) and early prediction (blue) that boost the early detection (red) and control (orange) efforts. Early education increases the number of young people able to recognize a zoonosis, while the artificial intelligence systems used in early prediction increase the ability to predict an outbreak in wildlife before the spillover can occur. Anthropogenic pressure, deforestation and bushmeat, climate changes, illegal animal trade, and intensive animal farms are all human-generated causal factors causing the emergence and resurgence of zoonotic diseases.
Zucca P et al.

"In Germany, for the practical part of zoonotic disease education in schools, we used Sir Isaac Newton, a research sniffer dog from the Leibniz-IZW, who showed students how dogs can detect illegally hidden animals in luggage," reports Leibniz-IZW scientist Susanne Holtze.

"Our joint international scientific work emphasizes the importance of sharing knowledge about zoonotic diseases and the One Health concept among younger generations. The COVID-19 pandemic shows us all that the transmission of diseases from animals to humans is not just mere theory, but a real threat," explains science communicator and co-author Steven Seet from the Leibniz-IZW.

More than 60 percent of the 1,700 known infectious diseases transmissible to humans originate from animals. Repeated and frequent zoonotic outbreaks, such as the recent COVID-19 pandemic, are caused by human impact on nature. In particular, the creation of huge intensive domestic animal farms, the frequent use of antibiotics in intensive breeding farms, the destruction of forests, the consumption of wild meat (bushmeat), and the illegal animal trade are factors that favor the occurrence and transmission of diseases from animals to humans and vice versa.

"Early education and health prevention programs in schools that explain the interrelationships of zoonoses within the framework of the One Heath concept are a fundamental prerequisite for the health of the population and the prevention of future pandemics," explains Jeannette Wichert, biology and chemistry teacher at the Robert Havemann Gymnasium in Berlin, Germany.

- This press release was originally published on the Leibniz Institute for Zoo and Wildlife Research website. It has been edited for style