May 25, 2016|3 min readAmerican Academy of Ophthalmology 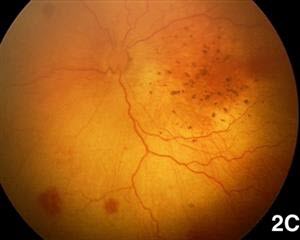 This image shows signs of retinal hemorrhaging in a baby with presumed Zika-induced microcephaly. Researchers from Brazil and Stanford University recently found additional eye abnormalities such as this in babies with Zika-induced microcephaly, according to a new study being published online May 25, 2016 in the journal Ophthalmology, journal of the American Academy of Ophthalmology.Image credit: American Academy of OphthalmologySAN FRANCISCO – May 25, 2016 – Researchers studying babies with a Zika virus-related birth defect say they have found previously unreported eye problems possibly linked to the virus that could result in severe visual impairment. In three Brazilian infants with microcephaly, the researchers observed retinal lesions, hemorrhaging and abnormal blood vessel development not noted before in relation to the virus. The findings are being published online May 25 in Ophthalmology, journal of the American Academy of Ophthalmology.

Zika virus is now known to cause microcephaly, a birth defect marked by smaller head and brain size. In Brazil, the site of the most serious outbreak, nearly 1.5 million people reportedly have the virus. Some 4,000 infants were recently born with microcephaly, according to reports. As a result, the World Health Organization declared a public health emergency in February, bringing added urgency to the need for more research. A prior study of 29 Brazilian babies with presumed congenital Zika infection showed that a third had eye problems. These included ocular lesions, optic nerve abnormalities and chorioretinal atrophy, a withering of the retina and choroid, the latter of which provides oxygen and nutrients to the retina.

For this case study, ophthalmology researchers from Brazil and Stanford University examined the eyes of three infant boys from Northern Brazil born in late 2015 with microcephaly. All had mothers with suspected Zika virus infections during the first trimester of pregnancy. Among the findings, the researchers identified several types of ocular issues not previously observed in relation to Zika virus, some of which could cause severe visual impairment if untreated. These included:

In addition to these observations, the infants in this study also exhibited other ocular symptoms noted in the previous study. Specifically, all three babies in this case study showed signs of pigmentary maculopathy, lesions that appear as speckles of pigment on the macula. Four eyes had symptoms of chorioretinal atrophy marked by a darkly pigmented ring.

The study is small with limited observational data. However, the findings add to a growing body of clinical information about how the Zika virus may affect children’s eye development and vision. The authors noted that it remains unclear whether the viral infection itself causes eye abnormalities or if they are a consequence of Zika-induced microcephaly.

“To my knowledge, the eye problems we found have not been associated with Zika virus before,” said Darius Moshfeghi, MD, senior author and a professor of ophthalmology at the Stanford University School of Medicine. “The next step is to differentiate what findings are related to the Zika virus itself versus microcephaly caused by the virus in order to better understand which infants will need screening.”

For now, the authors are calling for all babies with microcephaly in areas hit by Zika to be examined by an ophthalmologist. This is consistent with recent screening recommendations made by the Centers for Disease Control and Prevention.

"Until further notice, health professionals in regions endemic for Zika infection are advised to submit all newborns with microcephaly to retinal examinations," the authors wrote. "The procedure can contribute significantly to our understanding of the infection."