Chromatography data systems (CDSs)— the data “back end” for gas, liquid, ion, and supercritical fluid analytic chromatography—have evolved over the decades from simple chart recorders to onboard processors with minimal storage and analysis to personal computer-based and, finally, to connectivity with “peer” instruments and supervisory software systems.

Holmes explains that his firm’s OpenLAB CDS controls chromatography systems from competitor companies, including those that are no longer in business as independent vendors. “This capability is expected from CDSs today.”

Interoperability and versatility are the emerging “next big things” in CDSs. In addition to managing and controlling chromatography systems, CDSs need to be mass spectrometry (MS)-capable and connect with larger data repositories such as LIMSs and laboratory execution systems. This is in stark contrast to previous control and data software, which were instrument-specific.

“You have all this functionality on a chromatography workstation, but conventionally it will run only one system,” Stumpf tells Lab Manager. The duplication itself is inefficient, not to mention the training and learning curves. “Standardization—the ability to control several instruments and import data from other systems— helps reduce training costs and improve efficiency and consistency.” In the absence of interoperability data, convertibility is probably the next best thing. All major vendors provide means to “translate” data from competitors’ CDSs into their systems, although Stumpf notes that data standardization has been a slow-moving process.

The top 5 most important factors in our readers’ decisions to buy a CDS:

The solution is for chromatography system manufacturers to provide drivers that work with competitors’ data systems. Drivers consist of software similar to what enables printers and computers from two different manufacturers to work together.

For additional resources on Chromatography Data Systems, including useful articles and a list of manufacturers, visit www.labmanager.com/CDS 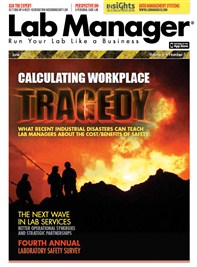