Modern centrifuges offer many new features. Not surprisingly, dials gave way to digital panels. Beyond just adding convenience and accuracy, digitization brings enhanced capabilities. “Customers can create their own programs and save them,” says Matt Lieber, product manager at Eppendorf North America (Hauppauge, NY). “Digital controls also offer better interfacing from a maintenance and service side, because you get better metrics on the use of the centrifuge.”

Centrifuges also keep shrinking in size. “Units with a smaller footprint provide the same or better performance as yesterday’s larger systems did,” says Peter Will, product manager for centrifuges at LabNet International (Edison, NJ), a Corning life science company. Despite the smaller size, modern centrifuges offer more options in the rotor. “Rotors have been redesigned to accommodate more tubes in the same amount of space or by increasing the tube angle to provide a better pellet,” says Will. Today’s rotors even handle multiwell plates.

An increasing number of customers also want an aerosoltight centrifuge. “As the interface between academic and pharmaceutical research gets blurred more and more,” says Lieber, “more academic researchers work with hazardous materials, [such as] infected cells.”

Many customers also look for sustainability in a new centrifuge, says Randall Lockner, marketing manager for centrifugation at Beckman Coulter Life Sciences (Indianapolis, IN). In general, sustainability means a more energy-efficient instrument. “Market pressure is driving manufacturers to make centrifuges that are quieter, use less energy, and incorporate recycled materials in manufacturing.”

To improve efficiency, some companies employ novel approaches. For example, Lockner says, “We implemented regenerative braking, similar to that used in hybrid cars, by taking energy from the slowing rotor and converting that into current that can be returned to the electric grid.” He adds, “This is not just reducing the carbon footprint of a centrifuge but actually creating power.”

Some smart features of modern centrifuges also improve efficiency between uses. As Lockner explains, “We built in features to the software that can recognize when a system is idle.” At those times, the system uses 60 percent less energy than previous generations of centrifuges did, just from a software improvement. Lockner also points out that his company’s centrifuges can be controlled from a smartphone.

It’s not always easy to know when to replace instead of repair. “It’s hard to give a fixed number of years,” says Lockner. “It depends on the usage profile of the instrument and how it’s been taken care of and what maintenance it received.” On average, though, Lockner expects a centrifuge to last 15 to 20 years.

According to Steven W. Wilhelm, professor of microbiology at the University of Tennessee at Knoxville, “A couple of parameters go into centrifuge replacement. One is safety. If an instrument becomes unsafe, then it is time to replace it.” He adds, “In many ways this is also coupled [with] reliability. Some of our oldest instruments— twenty to thirty years [old]!—still work great, while others simply fail over time.” Wilhelm also points out the attraction of increased flexibility in new instruments. He says, “If we need to collect samples from certain volumes, often simply getting a new rotor will not suffice.” When Wilhelm goes shopping for a new centrifuge, he looks for “the combination of safety, flexibility with regard to rotors/samples that can be processed, and price.” He adds, “Price is the third of these, as we do not want to compromise the first two.”

Depending on the use of a centrifuge, lack of maintenance can lead to earlier-than-usual replacement. That maintenance even includes regular cleaning. “Most customers don’t give cleaning a centrifuge a second thought,” says Lieber, “but lack of cleaning can lead to replacing one earlier than expected.”

In some cases, a perfectly fine centrifuge gets replaced to improve the technology. “Maybe something comes along that can really make a customer’s experience that much better or easier,” Lieber says.

A new centrifuge will also be more efficient. It could come with a better rotor design that is lighter and that saves energy. Today’s motors also run more efficiently. The compressors on refrigerated centrifuges cool more efficiently. In addition to a better compressor, some of today’s refrigerated centrifuges include a pressure regulator that controls how much coolant goes in it. “There’s a sweet spot where the amount of coolant is optimal,” Lieber explains. “A pressure regulator will add something to the manufacturing cost, but it also extends the life of the centrifuge and decreases the amount of electricity that it uses.”

Beyond saving energy, today’s centrifuges can save time. “More efficient designs can achieve the same separation in a shorter period of time,” says Lockner. “Time saved can be applied to grant writing or getting data together to publish faster.” He adds, “Time is the biggest return on investment of upgrading to a new centrifuge.”

Savings also come from spinning more tubes. “If you can spin more tubes at the same price, you get more for your dollar,” Will says. To get the most from spinning options, most scientists use more than one kind of rotor. Different rotors, though, come with different limitations on spinning rates, but some centrifuges identify the rotor and automatically handle any performance restrictions.

For additional resources on centrifuges, including useful articles and a list of manufacturers, visit www.labmanager.com/centrifuges

Centrifuges are necessary, yet versatile tools in any lab

The FC5513, a high-speed, benchtop micro centrifuge—is designed for a specific range of lab applications, while th... 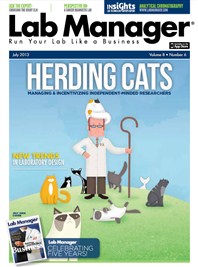 Lab managers make no secret of their desire for a bigger serving of commitment and cooperation from their staff scientists and technicians. However, dealing with such highly trained and knowledgeable workers can prove challenging. Managers need to create environments in which their staff can become energized, motivated, cooperative, and committed.

What lab managers need to consider when beginning a project
Through research, testing, care, and education, The University of Texas MD Anderson Cancer Center, located in Houston, Texas, takes an integrative approach to cancer. We speak with Pramila Sood, lab administrator for the Department of Laboratory Medicine, about the unique management issues at the Center.