Biological Safety Cabinets and Personnel Must Work Together

When working with a biological safety cabinet (BSC), safety comes first. Nonetheless, it’s easy to make mistakes that can compromise a BSC’s performance.

“One of the most common mistakes while working in the cabinet is to cover the front grill, where the air enters,” says Mary Ann Sondrini, executive director at the Eagleson Institute (Sanford, ME). “That disrupts the airflow, compromising both personnel and product protection.” It might seem convenient to set something—like a rack of test tubes—over the grill, but it’s definitely not safe.

In addition, a scientist needs to be aware of the movements that he or she makes in and around a BSC. For example, Sondrini says that you should move your arms in and out of the cabinet slowly. At NuAire (Plymouth, MN), marketing director John D. Peters agrees. He says, “Arm movements will disrupt unidirectional laminar airflow within the work zone and the air barrier at the front of the cabinet.” That starts a chain reaction of problems. As Peters says, “This disruption could cause air turbulence, increasing the odds of product cross contamination within the work zone.” In general, keeping down the turbulence inside a BSC improves safety inside and out. For example, Peters says, it “prevents the unwanted spread of aerosols or splatter of liquids.”

Also, be sure to take a look inside your BSC to see whether you are making any mistakes there. For instance, Sondrini says that people commonly clutter the inside of the cabinets with things that they don’t need. Even worse, she sees people putting Bunsen burners inside. “This causes big problems,” she says. “It generates so much heat that it completely disrupts the airflow. Also, Bunsen burners in cabinets have led to many explosions.”

To use a BSC safely, says Sondrini, a scientist must think about how it works. “Once you understand the airflows and how fragile the filters are, you learn what to not do,” she says. To help show scientists the way a BSC works, Sondrini’s team uses smoke and particle counters in the safety classes, which her company has been teaching for more than 25 years.

To ensure using a BSC in the safest way, you need a plan. “Make sure that you have an entire plan of how you will get in and out of the BSC,” says Deborah Thibodeaux, science director at The Baker Company (Sanford, ME).

The plan, she says, should include wearing gloves. “Many scientists think the cabinet is clean, so they don’t need gloves.” But gloves should be worn, and they must be sterile. “Spray the gloves with 70 percent ethanol or bleach,” Thibodeaux says. “That way the gloves don’t contaminate the cabinet with something from the outside.”

Beyond cleaning your gloves, Thibodeaux also reminds scientists to clean the BSC’s surface. “That means using a cleaner approved for your lab or 70 percent ethanol; soak the surfaces and let it go a minute, or five minutes if you can,” she says. Then you can wipe it dry, but let the cabinet run a few more minutes to resettle the airflow.

The plan should also include what to do if something goes wrong. Imagine that a BSC indicator shows that a filter is no longer working properly. What do you do? Peters says, “In this scenario, work will need to stop, the window sash should be closed, turn the power off, place a note stating that the cabinet is out of order, and place a call to your service provider.” This might be the most important part of a plan.

In general, keeping a BSC running keeps it safer but can consume more energy. Some BSCs come with a night mode, though, in which the viewing screen can be closed, the lights are shut off, and the airflow is reduced.

The longer a BSC runs the more impact on the filter, which gets loaded over time. Some BSCs have a magnehelic gauge that gives a general idea of how much filter loading has taken place. As a filter loads with particulates, some BSCs automatically adjust the fan speed as needed to ensure adequate airflow for safety.

Knowing when a BSC last received service also impacts its safety. “There needs to be clear communication on maintenance,” says Thibodeaux. Only then can all of the users be sure that they are working with a safe device.

Nonetheless, even different organizations recommend different maintenance cycles. For example, Peters says, “NSF recommends to certify your cabinet annually, while USP 797 recommends twice a year.” In a certification, says Peters, “your cabinet will be finely tuned to maximize safety through airflows.” He adds, “Your certifier can also recommend when it might be time to replace your BSC or if it’s in need of parts.”

If a BSC does need repairs, it could go beyond adjusting the airflow or replacing filters. Some BSCs also include audible and visual alarms. These need to be kept in working order too.

In some cases, the result of a certification or repair will be that a BSC cannot meet the necessary airflows. This is bad news, but it must be heard to keep a lab and its personnel safe. As Peters says, “If a cabinet is unable to meet specified downflow and inflow air, it usually means it’s time for new supply and exhaust HEPA filters.” He adds, “Cabinets in the field today will either have a manual process or an automated alarm to notify users if airflow is not within safety set points.”

At some point, staying safe means replacing an old BSC with a new one. In a lab that keeps the personnel properly trained and the BSCs properly certified, though, everyone can be safe for a long time.

For additonal resources on biological safety cabinets, including useful articles and a list of manufacturers, visit www.labmanager.com/bscs

Keeping your cells healthy and happy

Which of today’s complex exposure control installations will best serve your business objectives while keeping workers ... 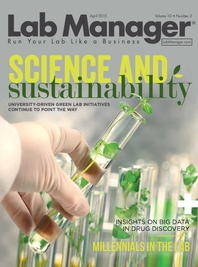 With freezers and fume hoods running nonstop, it’s no surprise that lab facilities hog more resources than do most other workspaces.

Ducks and water. Birds and sky. Squirrels and trees. Some things just fit their environments perfectly. Similarly, with their technological savvy, millennials could be considered the perfect fit for the laboratory, according to the lab managers we spoke with.
Big data might bring more benefits to drug discovery than to any other field. For one thing, discovering a new drug turns out to be incredibly difficult. On average, a pharmaceutical company tries about 10,000 drug candidates for every one that ends up on the market. Plus, the process of discovering and developing a new drug costs hundreds of millions of dollars and takes more than a decade—some say more for both measurements.