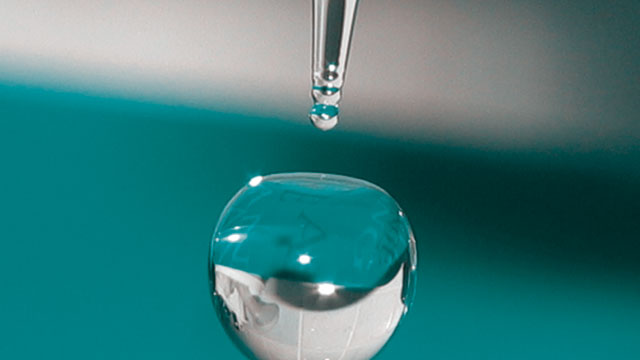 As biological assays shrink to sub-microliter volumes, dispensing and liquid handling based on air displacement become less accurate and predictable.

Acoustic liquid dispensing (ALD), the technology behind inkjet printing, is based on century-old technology. During the 1920s, scientists Robert Wood and Alfred Loomis discovered that sound projected through a fluid from below caused volcano-like structures at the surface, from which droplets emerged and shot upward. Fifty years later, Xerox and IBM exploited this principle to create inexpensive inkjet printers. Now two companies, Labcyte (Sunnyvale, CA) and EDC Biosystems (Fremont, CA), have applied ALD for ultra-precise, low-volume liquid handling.

Systems from both companies dispense nanoliter-sized droplets from a source plate, upward, into an inverted destination plate, at high speed and accuracy.

In Labcyte’s Echo® Liquid Handler instruments, a sonic transducer first scans the source wells to measure fluid depth. After determining fluid depth, the transducer returns to the first source plate and applies bursts of acoustic energy whose strength depends on the meniscus level as determined in the initial survey step. A 2.5 nanoliter droplet emerges and sticks to the bottom of the inverted destination plate through surface tension. Larger fluid transfers require dispensing of multiple 2.5 nanoliter droplets.

EDC’s ATS Acoustic Liquid Dispenser tunes the sound input to produce droplets ranging in volume from 1 nanoliter to 20 nanoliters. With tweaking, it is possible to dispense 25 or even 50 nanoliters reproducibly.

Accuracy becomes a concern at such small scale. According to Michael Forbush, PhD, a physicist at EDC, achievable accuracy and repeatability depend on the source plate. “Our system works best with filmbottom plates, which are available from many vendors. With those plates users can expect about two percent variability in dispensing volume.”

Forbush explains that at low nanoliter scale, surface tension and static electricity become factors in ways they do not for microliter-scale assays. EDC’s dispenser, for example, deionizes both source and destination plates before use, thus eliminating electrostatic events as a potential error source.

Fluid properties, particularly surface tension, also come into play. “Larger drops drag some of the liquid at the surface along, creating satellite droplets,” Forbush says. “Solutions with lower surface tension and larger droplets tend to have more and larger satellites.” One workaround is to adjust the droplet’s escape velocity. “Some very enterprising customers have produced consistent 50 nanoliter drops, but it takes time. We don’t want to promise customers they can do this with every fluid.”

In the early days developers worried that solutes, for example surfactants, might affect surface tension sufficiently to require separate calibration or other adjustments to assure accurate dispensing. “This turned out to be a nonissue, since all dissolved compounds tended to affect droplet formation similarly,” Forbush says.

Achieving larger volumes through multiple dispenses is also complicated by time. Liquid settling between drops for dimethyl sulfoxide takes about 12 milliseconds, so 10 drops involve 120 milliseconds of settling time, which is reasonable. “But dispensing a thousand drops to reach your volume takes twelve seconds per well, which times 384 wells is a long time,” Lusen adds. Compressing the time between droplets is impossible since the liquid must come to mechanical equilibrium before the next drop ejects reliably.

Large-volume applications where acoustic dispensing is valuable are few but significant, mainly related to sequencing (both Sanger and next-gen) and PCR. Lusen recalls a customer with a seven microliter Sanger sequencing assay who, with the limitation of using only one tip, turned to acoustic dispensing because it was in the long run faster than dispensing protocols involving multiple tips. “And there was no cost for tips or wash solvents, and no carryover contamination.”

Many users rely on pin tools for dispensing very small volumes. Pin tools are slotted pins of inert construction that pick up and dispense nanoliter-sized droplets by direct contact. Due to their speed, pin tools are popular in labs that conduct high-throughput screening with DMSO-based solutions. But the pins are nontunable. “Their downsides are fixed volumes, the need for solvent washes, and material carryover,” Lusen says.

Carryover is not much of a problem for bulk dispensing, but in assays of highly potent pharmaceuticals it can skew results when the compound does not completely wash off the pin tool surface. In his own experience (in his previous career) Lusen turned to acoustic dispensing for that very application.

Aside from supra-5-microliter dispensing—for which many applications still exist—Lusen sees no practical barriers from a system or reader perspective for adopting acoustic dispensing. “You might need a special reader if an assay requires it. Or if the destination plate is not a standard SBS (Society for Biomolecular Screening) device, you might require a custom gripper.”

He mentions as an example Bruker’s ground steel MALDI target plate for mass spectrometry sample preparation, typically used for proteins. Another possible hurdle arises when the destination plate falls out of the thickness range of conventional plate handlers and cannot be moved or stacked conveniently.

As mentioned, most plate manufacturers offer plates for inverted microscopy, and small sample droplets will stick through surface tension, upside down, to wells of most sizes in most assays. The exception, which Lusen also related by anecdote, involved a larger diameter well and 200 microliters of media, which did not stay fixed in the bottom of the well.

Old-school scientists marvel at the smallness of today’s naked-eye-invisible biological assays. Their value, says Chris Grimley, VP of marketing at Labcyte, extends beyond physical dimensions. “The reagent cost reduction associated with nanoliter-scale assays can be truly game changing. Published data demonstrates that assay volumes can be reduced up to a hundredfold for applications ranging from NGS library prep to DNA assembly for synthetic biology. Cost savings of that magnitude enable projects that previously would not have been feasible. Our Echo liquid handlers don’t just reduce costs, they facilitate new science and the future discoveries that result.”

For additional resources on liquid handling, including useful articles and a list of manufacturers, visit www.labmanager.com/liquid-handling