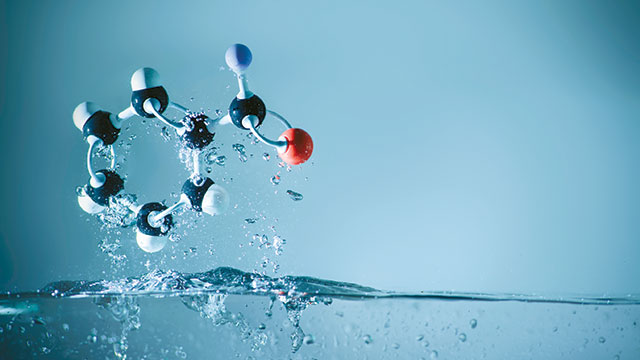 To analyze any life science sample, taking it apart really helps, and that often requires some form of chromatography—usually liquid chromatography (LC). The best technique for separation depends on the physical characteristics of the sample. Many LC setups use columns that include C18 to split up the component, but that doesn’t always work. “Highly polar compounds, like metabolites, are typically poorly retained on C18 columns,” says Wayne K. Way, technical marketing manager at MilliporeSigma, the U.S. life science business of Merck KGaA, Darmstadt, Germany. To separate the components of such samples, life scientists often turn to hydrophilic interaction liquid chromatography (HILIC). According to Way, “HILIC provides increased retention of highly polar compounds, and it also provides better mass-spec sensitivity than a highly aqueous mobile phase.” In general, when working with highly polar compounds—like nucleotides, amino acids, or drug metabolites—HILIC tends to be the best choice for separation.

At the UC Davis Genome Center’s West Coast Metabolomics Center, director Oliver Fiehn also points out some separation challenges that HILIC can handle. “Most primary metabolites—for example, citrate, malate, glucose, phosphoglycerate, or ribulose-5- phosphate—are simply not retained by C18 columns.” He does note, however, “Some types of C18 have a better capacity to retain polar compounds than others, but generally, capillary electrophoresis, hydrophilic interaction chromatography, or gas chromatography give you much easier, much more reliable, and much faster results than C18-based efforts.”

That said, HILIC is not magic. “One challenge is optimizing chromatographic media, injection conditions, and solvent miscibility,” Fiehn says, “but that’s true for all LC-MS methods.” He adds, “We have seen that HILIC methods are very reproducible in retention times, unlike other authors have observed, but we have also found that quantitative data are often less easy to reproduce than using GC-MS or C18 LCMS methods.”

To optimize HILIC, life scientists need to do some fine-tuning for the application at hand. “It is not easy to predict which metabolites will be retained by which HILIC phase and under which HILIC buffer conditions,” Fiehn explains. “Finding the right column with the right chromatographic eluents is still an art, and much trial and error is needed.” So getting the right setup for a particular sample takes some exploring.

Since the stationary phase of HILIC will interact ionically with charged compounds, says Ni, “all HILIC columns must be used with an eluent with some ionic strength.” He adds that the eluent needs “high ionic strength for charged columns, like bare silica and amine columns, and low for uncharged or zwitterionic stationary phases.” So, the column-eluent combination makes a big difference in the results.

To simplify the optimization, some vendors supply method-development tools. For example, Waters Corporation in Milford, Massachusetts, created a wall chart that includes help with selecting the column, mobile phase, and organic modifier (see the link at www.waters.com/HILIC). This chart also explores method optimization, including a flowchart for selecting a method based on the analyte being studied. In a section on the sequence of optimizing a HILIC method, this chart advises: “Once the stationary phase, organic modifier, and mobile phase pH have been chosen, retention and selectivity can be further optimized by altering gradient slope and column temperature.” It goes on to provide a specific series of steps for accomplishing this. When performing these optimization steps, Waters encourages users to evaluate the results after each step, and then stop “after criteria for success [have] been met.”

As Ni concludes, “The choice of an appropriate separation column is highly dependent upon the analytes to be separated. The sample matrix may also play an important role for the decision.”

Getting a sample prepped for HILIC also takes some twists. “Because of the similarities to reversed phase chromatography in mobile phase conditions, it can be tempting to apply the same routines for preparation for HILIC,” Ni says.

“This, however, will definitively lead to problems for the chromatographer.” He suggests using a “95 percent organic solution in water or a composition similar to the mobile phase but without buffer salts” when washing samples for HILIC.

If this technology sounds like what your lab needs, it could already be a good fit with some of your equipment. “In most analytical labs,” Ni says, “HILIC is the perfect complement to reversed phase since it uses the same equipment—pumps, injectors, detectors, and even eluent solvents—and shares both practical and theoretical features with reversed phase chromatography.”

Some applications might require specific columns. For example, says Ni, “The U.S. Food and Drug Administration has recommended SeQuant ZIC-cHILIC columns for the analysis of melamine and related substances.” He adds that these columns “enable selectivity tuning in chromatography through altered interaction with anionic and cationic molecular moieties.”

So getting HILIC started in your lab depends on getting the right platform and setting it up with the components that work the best for your applications. It might turn out, though, that some of your existing devices fit in with HILIC, smoothing the addition of this tool to your analytical arsenal. HILIC will also expand the range of samples that your lab can handle.

Looking at Other Types of Liquid Chromatography?

Here are nine questions you may want to ask if you’re buying either an HPLC or UHPLC system.

For additional resources on liquid chromatography, including useful articles and a list of manufacturers, visit LabManager.com/LC

How To Make Effective Use Of Your Most Fundamental Reagent

How To Make Effective Use Of Your Most Fundamental Reagent

How to Optimize Separations Performance in Demanding Applications

How to Optimize Separations Performance in Demanding Applications