Automated liquid handling (ALH) is arguably the main attraction in life sciences laboratory automation. Based on the cost and complexity of early systems, one would not have predicted a bright future for ALH, or for lab automation generally. Yet the pharmaceutical industry’s decade-long embrace of very high-throughput screening, followed by high-throughput genomics studies, created the necessity that made automation commonplace.

While very large, complex liquid handlers still dominate large industrial and academic projects, the industry is trending toward versatile, modular ALH systems—seemingly for every budget. Instrumentation, software, and methods have followed the trend toward greater user accessibility. Assay manufacturers have also bought into the inevitability of automation, and many supply tests in both manual and automated formats.

The “low” end of the ALH marketplace is not necessarily fated to low-level applications. BioTek’s products, for example, are often integrated with larger instruments through third-party automation specialty companies to provide additional functionality, like plate washing or reading. “The integrator is usually the company that makes the large-deck liquid handler,” Greene says.

ALH vendors are eager to combine workflow steps in their devices to enhance productivity and further narrow the gap between highand low-end instrumentation. BioTek’s EL406™ Microplate Washer Dispenser, for example, combines separate wash and dispense technologies into a single instrument. This saves equipment costs and valuable bench space but also reduces operator contact. “Users spend less time moving microplates from one instrument to another,” says Greene. “This alone could add up to an hour or more per day.”

The wash function also comes in handy for media changes, where it serves to remove spent media. “A high-end ALH [system] could do this as well, but you could spend five times as much for it,” Greene says. Even more functionalities could be combined or added in, such as shaking or heating.

Multispan allows each pipette in an array to move independently, through multiple axes, in addition to the standard side by side. Any tip may dispense into any well (or tube or vial), regardless of where its previous “neighbor” is located. The robotic arm provides a span of up to 21 inches off-deck with onetouch “easy teaching” that facilitates workflow integrations. The Encore also comes with a software package featuring a 3-D simulator that provides researchers with the ability to set up, visualize, and optimize protocols remotely and offline before actually running experiments.

Speed and throughput seem like logical reasons to acquire an ALH system, but most users quickly realize that consistency of results is a far more valuable asset. “As a contract research organization, it is important for us to maintain accuracy and reproducibility, particularly when analyzing clinical samples for pharmaceutical companies or medical research institutes or universities,” says Alamgir Khan, Ph.D., technology services manager at the Australian Proteome Analysis Facility (Sydney). Khan believes that achieving those quality goals is impossible without an ALH system, particularly when reagents are expensive and samples precious. 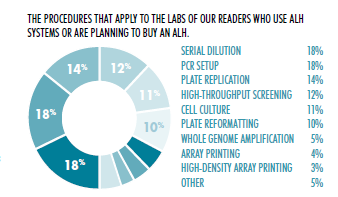 One could, in fact, make the case that consistency, a reduction in pipetting errors, and human/ ergonomic factors— not speed—are what tip the scales in favor of automation. Agilent’s Peter Mrozinski likes to say that an ALH system is about as fast as a good technician on a good day. That is perhaps false modesty when one considers the repetitive aspect of pipetting.

Even where labor is relatively inexpensive, as in academic labs, one could argue that even a junior scientist’s time is better spent designing experiments or analyzing data than performing mind-numbingly repetitive, error-prone pipetting. “Today’s scientists are under pressure to finish projects and to publish papers,” observes Dr. Carsten Buhlmann, international product manager for automation at Eppendorf (Hamburg, Germany).

Christina Schott, senior technician at Munich’s (Germany) Technical University, says she was “facing the acquisition of a liquid handler with great skepticisim.” Before the purchase of an Eppendorf epMotion system, her group put the device through a rigorous test: Schott vs. the Machine, which the Eppendorf passed with flying colors. Schott now refers to the ALH system as she would a coworker. “I like ‘him’ very much. He is now one of us!”

The challenge in reaching first timers, or labs unfamiliar with or frightened of automation, is to overcome fears of the unknown, then convince them of the payback. Mehul Vora, global product manager at Beckman Coulter’s (Brea, CA) Life Sciences Automation group, defines entry level as labs that process five or ten samples or two to three microplates per day. This is where the connection between manual and automated processing seems most intuitive. These labs can also be the hardest sell because managers tend to underestimate time spent in manual pipetting and the preparation of samples and standards.

Fear of automation is a common hurdle for lab workers of all ages. During a “voice of the customer” exercise, a seasoned Beckman customer related how his daughter, an undergraduate biology major, refused to use automation. Her excuse was that she believed she would have to learn programming, and besides, she could do by hand everything an ALH system could do.

That’s why control software, an intuitive interface, and canned methods are critical. “Having an intuitive system helps,” Vora says, using the tried-but-true example of a smartphone vs. an iPhone, where every feature is accessible by touch, dragging, and dropping. “Having someone try the software, without having to program anything, and be able to run an assay in 15 minutes is the ideal.”