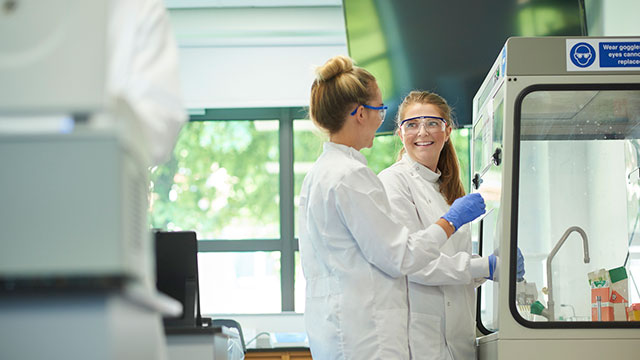 Despite living through the first big energy crisis in the United States in the early 1970s, I never remember hearing anyone telling me to close a fume hood for anything other than safety reasons. No one worried about the energy—not even by my last lab days in 1990. But now, more than a quarter of a century later, many organizations and institutions look for ways to reduce the energy used by hoods. It makes sense, because fume hoods use the most energy of all typical lab equipment.

Still, there’s lots of work to do. As Star Scott, green lab program coordinator at the University of Georgia at Athens, says, “You’d be surprised how many times I go in a lab and the sash is wide open, the fume hood is on, and there is nothing in it that requires ventilation.”

The amount of air that a hood exhausts plays a key role in its energy usage. Old hoods move constant volumes of air, but now labs can get variable air volume (VAV) hoods. With a VAV hood, explains Beth Mankameyer, sales engineer at Labconco (Kansas City, MO), “when the sash is lowered, a valve—or damper—in the duct closes down, which lowers the amount of exhausted air.”

Today’s high-performance hoods can be placed on a VAV mechanical system. With these systems, closing the sash reduces the energy use. So, a VAV hood’s sash should always be closed when it’s not in use.

For a constant air volume (CAV) hood, closing the sash doesn’t change the amount of air being exhausted. To reduce the energy use in a CAV hood, it needs to be turned off when possible or upgraded, which means adding a control system.

An advanced control system can give a CAV hood the ability to reduce the amount of air exhausted when the sash is lowered. For example, Phoenix Controls (Acton, MA) makes a valve that lets a hood go down to very low airflow with stable control, says sales support engineer James Barrette. “It also lets us maintain maximum airflow in a hood, when needed.”

To get complete control of a CAV hood, Phoenix Controls uses several elements: the valve, a sash sensor, and other optional elements. For instance, a zone-presence sensor tells the system when someone is in front of the hood. “If someone is moving in front of the sash, the hood operates normally,” Barrette explains. “If the person steps back when the sash is open, the system sets back the face velocity, which can reduce the energy used by 40 percent.”

When installing new fume hoods or replacing old ones, it is an ideal opportunity to improve energy efficiency. To do that, says Mankameyer, “make sure that it meets the SEFA definition of a high-performance hood.” The Scientific Equipment and Furniture Association (SEFA) definition means that a hood has been tested to operate safely at just 60 feet per minute face velocity with the sash fully open, and still provides the needed safety measures.

Labs can also consider ductless hoods. “We have a few ductless fume hoods, but I’d like to see more,” Scott says. “They are the most energy efficient, but really specific filters can be costly.” To go this route, first consider the hazard level of what will be used in the hood.

With an upgrade in equipment and behavior, you can reduce the “amount of cash” that your hood pulls out of your lab.