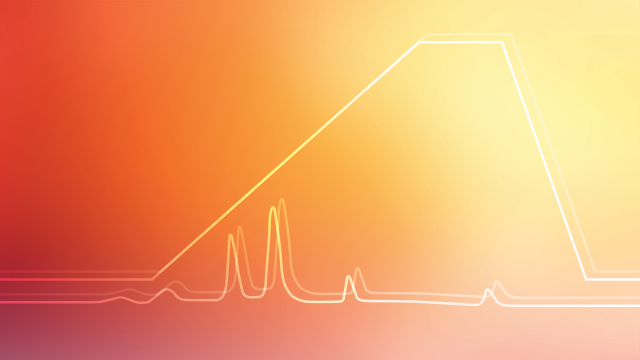 In 1969, Waters Corporation (Milford, MA) produced the first commercial HPLC platform. Since then, HPLC platforms have become increasingly easy to use, even as the technology’s capabilities have increased. Nonetheless, producing the right gradient for separation remains a crucial aspect of this analytical technique.

At the Bindley Bioscience Center of Purdue University (West Lafayette, IN), metabolomics research scientist Amber Hopf Jannasch and her colleagues use HPLC to separate complex biological mixtures prior to mass spectrometry (MS) analysis. Jannasch notes that small polar molecules can be a challenge for gradient separation, “but with advances in hydrophilic interaction liquid chromatography, or HILIC, it’s becoming less problematic.” HILIC columns are made for these very molecules. Still, Jannasch adds, “We have to ensure that the buffers we use for separation are mass-spec-compatible, so we cannot use most ionpairing types of methods.”

Other scientists also use HPLC upstream from MS. In the Department of Pharmaceutical Sciences at the University of Tennessee Health Science Center in Memphis, for example, scientists use HPLC-MS to quantify compounds in unknown liquid samples. When asked about the challenges of getting a successful gradient separation, senior research specialist Dejian Ma says, “It varies due to many factors, such as compound properties, column types, mobile phase solvent selection, etc.”

Despite the advances in HPLC platforms, columns, and reagents, it still takes knowledge and experience to get the best separations. When asked for top tips for getting a successful gradient separation, Jannasch says, “We carefully consider the physical properties of the molecule of interest before starting a column screen.” If Jannasch and her colleagues want to pull out a small, polar molecule from a sample, the scientists use HILIC. “If it’s a hydrophobic molecule,” she says, “C18 will probably work.”

For instance, scientists in India used HPLC to study the breakdown of pharmaceuticals made for oral delivery.1 Specifically, the researchers wanted to study how montelukast sodium—an asthma medication—can be degraded by various oxidative media, including oxygen, in light. Using C-18 columns and a gradient method of HPLC, the scientists separated the degradation products from oxidation for MS analysis.

For most samples, a range of HPLC variables must be adjusted for the best separation. Moreover, optimizing the variables is not always straightforward. To separate four monophosphate nucleotides, for instance, scientists in Japan performed a systematic analysis of HILIC approaches.2 They experimented with the buffer concentration, gradient time, and temperature. To separate the four compounds, they used four HPLC columns: ZIC-HILIC, ZIC-cHILIC, NUCLEODUR HILIC, and PC HILIC. The scientists noted that “the HPLC conditions for each column were successfully optimized, [and] optimized HPLC conditions differed from column to column.”

In all analytical methods, some of the most complicated challenges arise from unknown samples. In most cases, scientists know what they are analyzing in a sample, but they don’t know the concentration. “It’s definitely more challenging to analyze a completely unknown sample in order to solve a real-world problem,” Ma notes. It gets even more complicated if the range of possible compounds is unknown. Ma shares his top tip for such an analytical challenge: “Before working with unknown samples, make sure that the hardware system performs well by always running a blank or a standard sample first.” He adds, “This is probably true for any analytical technique, not just HPLC.”

Scouting for a solution

Many approaches to HPLC require some method development. In reverse-phase HPLC, for example, scientists use a scouting gradient when they don’t know the best conditions to separate a sample. A scouting gradient helps them determine whether a constant or a gradient method will work best with a sample.

To run a scouting method, scientists increase the percentage of the elution linearly over a run of about a half hour to an hour. The results can be used in various ways to decide how best to separate a sample. If the peaks from the results of running a sample with a scouting gradient take up a small part of the run time—say, one-quarter or less—an isocratic (constant) method can be used. On the other hand, if running a sample through a scouting gradient produces peaks roughly half or more of the run time, then a gradient method will work better. In between, scientists need to make the best guess and see what happens.

In some cases, different gradient methods can be tried on the same sample. A team of scientists from South Africa and France used gradient methods of HPLC to separate forms of amphiphilic hyaluronic acid, which is found in connective and neural tissue.3 The methods included normal- and reverse-phase gradient HPLC. Trying different forms of gradient HPLC can separate samples based on different features. For this work, as an example, the normal-phase gradient separated the compounds based on polar hydroxyl groups in the sample interacting with polar components of the gradient material; the reverse-phase method separated the sample’s components based on hydrophobic features of the sample interacting with nonpolar elements on the C8 columns.

As these examples show, no matter how much HPLC instruments and reagents advance, scientists still comprise a crucial element of the process. Moreover, getting the best separation depends on some experimenting. The more a scientist knows about what might be in a sample, the more the method can be developed based on knowledge and experience. In an unknown sample, scientists might need to start from scratch—trying different methods to see what does the best job of isolating specific components.

For additional resources, including useful articles and a list of manufacturers, visit www.labmanager.com/hplc-systems