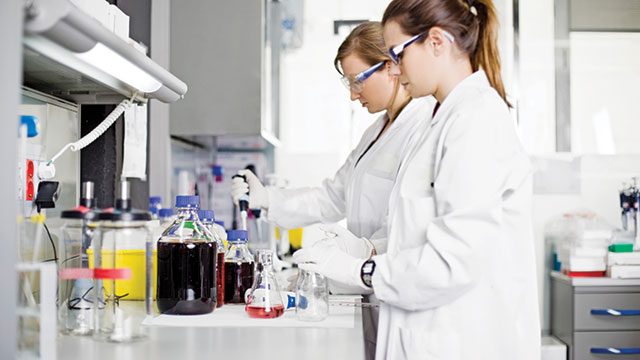 Solventless sample preparation methods have been applied to a variety of sample types, and Stidsen says that they are “mostly used for volatile through semivolatile compound ranges, including pesticides, polycyclic aromatic hydrocarbons, et cetera.” The advances in solventless techniques continue to increase the possibilities for a wide range of compounds to eliminate, or at least reduce, the use of solvents.

In the early 1990s, Janusz Pawliszyn, a chemist at the University of Waterloo in Ontario, Canada, invented solid-phase microextraction (SPME), which can combine sampling, extraction, concentration, and sample introduction in one solvent-free step. “In the 1980s, there was a drive to eliminate chlorinated solvents,” Pawliszyn says, “so I invented SPME to address the challenge.” Although, as Pawliszyn points out, it has been “proven that it is completely unnecessary in many cases to use solvents, and you can get the same results,” he says that using solvents in sample preparations is an “entrenched technology.”

A standard form of SPME uses a fiber coated with material that will extract the desired components from a sample, which can be solid, liquid, or gas. A polymercoated fiber goes in the headspace over a sample, and heating the sample releases components that are absorbed by the fiber and later extracted from it. Pawliszyn notes that SPME can have different formats, such as a fiber, membrane, or various other shapes made of different materials, all of which can be modified to accommodate an application. For example, Pawliszyn and his colleagues are working on an in vivo application that can be used by a surgeon to biopsy tissue with a tiny needle. “It doesn’t take tissue out,” Pawliszyn explains. “It just takes the chemistry of the sample—all while causing less damage than a conventional biopsy.”

When using SPME as sample preparation for gas chromatography (GC) methods, it is completely solvent-free because the organic compounds are desorbed from the fiber in the heated GC inlet. For liquid chromatography (LC) methods, says Stidsen, “The extraction of sample is straightforward; however, transferring the organic compounds from the fiber to the LC mobile phase is typically not performed by direct injection.” He adds, “The extraction of the organics from the fiber is performed using a small amount of solvent, then injecting [them] into the LC.”

The use of the SPME Arrow follows the same concepts as traditional SPME technology. “Some parameters need to be determined for the sample matrix, but it is intuitive to use,” Stidsen explains. “CTC Analytics has also automated the SPME Arrow process, which reduces man-hours, increases repeatability, and makes the sample preparation and analysis process user friendly.”

The controversy over what’s in electronic cigarette vapor continues, and Stidsen and his colleagues analyzed some samples with thermal desorption tubes. The sorbent inside these tubes collects the sample, which is transferred to a GC-mass spectrometer (MS) for analysis. No solvent is needed in the desorption-tube process.

“People had been using sorbent materials and extracting the material with solvents to analyze the vapor,” Stidsen says. “With our approach, the sample is collected in a thermal desorption tube, and the organic compounds are then transferred to the GC column by heating the collection tube.”

Stidsen’s team found some interesting components in the vapor, such as volatile organic compounds, including acetaldehyde and formaldehyde. This and other work suggest that e-cigarette vapor is more complicated than originally thought.

Pat Sandra, founder and president of the Research Institute for Chromatography (Kortrijk, Belgium), happened to be studying the properties of polydimethylsiloxane (PDMS) when he realized that it was getting adsorbed by a Teflon stir bar, and that led to stir bar sorptive extraction. Germany-based Gerstel commercialized the technique as Twister.

The Gerstel Twister provides solventless sample preparation for GC and LC. A user just stirs the sample with the Twister, a PDMScoated magnetic stir bar, and it extracts organic compounds from the solution. Various techniques, including thermal desorption, can be used to extract the compounds from the bar.

The ZipChip from 908 Devices (Boston, MA) skips traditional methods of sample preparation. As explained by Chris Petty, cofounder and vice president of business development and marketing at 908 Devices, “The ZipChip is microfluidic technology—constructed [with] very tiny channels etched into a glass substrate—that separates samples like liquid chromatography or traditional capillary electrophoresis would, and electrosprays them so you can use MS for detection.”

This method works for most liquids and samples that are soluble. Plus, it requires only about 150 nanoliters per minute of background electrolyte, which is “a volatile material that is pretty much gone when sprayed and so is very gentle on the MS,” Petty explains.

This technology also comes with preprogrammed methods for working with, for example, small molecules, peptide digests or intact proteins, and antibodies. Petty adds, “We also have a line of background electrolyte consumables that come prepackaged.”

Mike Pacold, assistant professor of radiation oncology at New York University’s Langone Medical Center (New York, NY), used ZipChip with mass spectrometers in metabolomics studies during his time at the Whitehead Institute at MIT. “The speed of analysis can really help the capacity of the lab, as we are reducing what was a 15-to-20-minute chromatography analysis down to two minutes per sample,” he says.

When solvents are reduced or eliminated whenever possible, science grows more sustainable and, in many cases, simpler. The results can be good for everyone.

For additional resources on sample prep, including useful articles and a list of manufacturers, visit www.labmanager.com/sample-prep