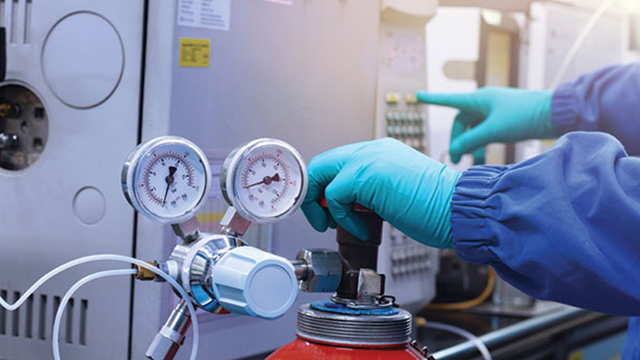 The expanding roles of proteomics and metabolomics in precision medicine and drug discovery highlight the power of mass spectrometry-based techniques to identify, define, and quantify novel biomarkers, molecular interactions, and expression patterns. The popularity of these fields has consequently brought the associated technology to the individual laboratory both in terms of accessibility and cost. A prerequisite to an accurate analysis of the proteins in a sample is thorough separation, which is most frequently accomplished via gas chromatography (GC) or liquid chromatography (LC). Both methods require a reliable supply of highly purified gas, of one kind or another based on preference for the sake of variables such as efficiency, expense, and safety.

In GC, the mobile phase consists of a carrier gas through which the solute can move from the stationary phase. Several gases are appropriate—including hydrogen, nitrogen, and helium—but each has intrinsic diffusivity and viscosity properties that make it more or less ideal as a carrier. The comparatively low diffusivity of nitrogen impacts efficiency and therefore throughput, while the high viscosity of helium necessitates high inlet gas pressure and therefore longer separation columns. Additionally, although helium is atmospherically abundant, it is largely released as a byproduct of commercial natural gas exploration, and dissipates rapidly upward into space unless purposely sequestered. As the Federal Helium Reservecurtails its operations, a worldwide shortage is becoming dire and its price is becoming dear, while nitrogen and hydrogen are all around us, all the time, for the taking.

Hydrogen also serves as a fuel gas for flame ionization detection in GC-MS. A small laboratory intermittently running a single GC-MS setup can often justify using a single, interchangeable hydrogen cylinder. In larger operations that dedicate significant space, time, and resources to multiple GC-MS devices running simultaneously, the use of cylinder gas requires oncurrent employment of multiple bundled tanks. Such elaborate setups necessitate automatic manifold-based switching mechanisms. They are often subject to zoning laws and principles of common-sense self-preservation placing them outside the laboratory space, making them prone to leakage and other disruptions that require the input of professional repair services. Bundling several hydrogen tanks under high pressure can be disastrous because of the potential for explosion or rapid displacement of ambient oxygen and possible asphyxiation.

Operational costs even for one apparatus can add up quickly. For example, if a 100-liter hydrogen cylinder lasts 10 days and costs $200, then replacement costs alone will exceed $7,000 per year, without factoring in equipment rental and delivery. Moreover, supply is disrupted when a cylinder empties, potentially affecting experimental planning and results. Hydrogen generators mitigate many problems with cylinder-based supplies. They retail from around $10,000 upwards, potentially realizing a savings within a year of use, even to replace a single tank. Generators can run constantly, producing an uninterrupted and highly pure source of hydrogen, usually with minimal operational and repair costs beyond continued use of an electrical outlet and a supply of deionized water. Additionally, they produce and store only small amounts of hydrogen at comparatively low pressures, eliminating the catastrophic hazards associated with cylinders. Finally, a diminutive footprint allows them to be maintained within the laboratory space, often on or under benchtops.

Hydrogen generators function via water electrolysis or methanol reformer processes, although most commercially available units for GC applications use electrolysis. The essential engine of the generator is an electrolysis cell, across which a constant voltage drives a reaction that removes electrons from water at the anode and adds them back to hydronium ions at the cathode across a proton exchange membrane. This membrane is approximately worth its weight in gold, because it is most often composed of palladium, a transition metal listed on commodities exchanges. Additional use of a platinum catalyst increases the purity of the resulting H2 gas to levels above 99.999 percent, a baseline for many GC-MS applications.

If hydrogen generators can improve GC-MS in terms of cost, efficiency, and safety, then what about gas supply solutions for LC-MS? Although LC-MS is used to examine liquid or solid analytes, a gas source is required to eliminate solvent in a sample before it enters the detector from an ion source. Nitrogen most frequently serves this purpose and acts as an ionization aid in both electrospray and atmospheric pressure-based LC-MS setups, and serves as a curtain gas to enclose nebulized ions at high temperature as they enter the detector. In a nitrogen generator, N2 is purified from ambient air, which is compressed and subjected to pressure swing adsorption. This procedure functions on the principle that gases are attracted to adjacent surfaces under high pressure. After adsorption, swinging the system to low pressure releases the collected gas of interest. Because different surface materials have intrinsic attractions for different gases, constituent gases can be selected using different adsorbents.

Because the volumetric demands for nitrogen in LC-MS can exceed a cylinder per day with constant use, switching to a generator system can provide a savings benefit within less than a year after purchase, similar to a hydrogen generator for GC-MS. Nitrogen generators cost more, however, starting at around $15,000, and often come separate from attachments such as air compressors. There are several leading suppliers that offer a range of generators of both types, in addition to zero air generators, which remove hydrocarbon impurities from ambient air. Zero air has common applications in both GC-MS and LC-MS, especially in analysis of aromatic hydrocarbons. Among commercial offerings, Peak Scientific (Billerica, MA) supplies the Precision line of hydrogen generators and the Genius line of nitrogen generators. F-DGSi (Evry, France) supplies the elegant, space-saving series of Modular Alliance stackable generators, which can provide hydrogen, nitrogen, and zero air simultaneously with a small benchtop footprint. These and other suppliers including Parker (Haverhill, MA) and PerkinElmer (Waltham, MA) offer ranges of generators with different capacities. With such an array of options, you can easily bring your own gas to your GC and LC operations, no matter how small.

For additional resources on gas generators, including useful articles and a list of manufacturers, visit www.labmanager.com/gas-generators