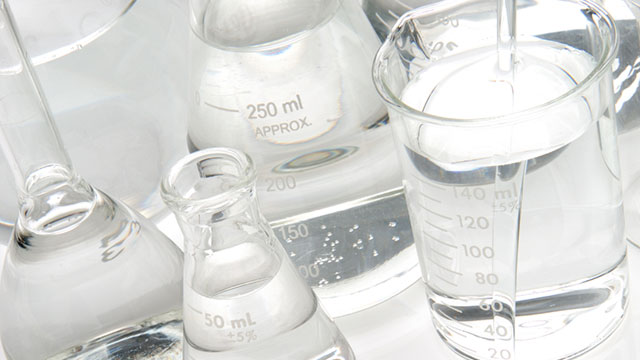 Analytical chemistry, including liquid chromatography mass spectrometry, uses type I water “and beyond”—a designation for standard type I water that undergoes additional treatment just before use.

Thermo Fisher Scientific, Qiagen, GE Dharmacon, and other vendors sell this grade of water, which is produced by filtering type II water through a 0.1 μm membrane. It has been suggested that type I water, such as that generated by Millipore’s Milli-Q® purification systems, can substitute for nuclease-free water, provided the proper buffers are employed.

Erica Reiss, sales and marketing manager at LabStrong (Dubuque, IA), makes the case for distillation as the preferred generation method for type II water. “Distillation has been around for many years, and the product is always consistent, whereas with competing technologies such as deionization (DI) and reverse osmosis (RO), quality drops off as the consumables become exhausted. Stills are also always ready to use, even after prolonged downtime, and do not require replacement cartridges.” LabStrong’s Fi-Streem distillation systems generate from 1.4 to eight liters per hour. The company also offers a double-distilled model that produces up to four liters per hour of bi-distilled water.

Lab managers accustomed to single-, double-, and even triple-distilled water systems will point out that type II systems relying on reverse osmosis or electrodeionization run on a “razor blade” economic model in which the bulk of revenues over time come from replacement membranes and cartridges. Through this logic, cash-strapped labs, particularly in developing nations, will have difficulty paying for consumables.

Dr. Estelle Riché, senior scientist in the lab water application group at Millipore S.A.S. (Guyancourt, France), disagrees. “True, distillation does not use cartridges, and it is historically the way scientists have purified water. The problem is distillation requires a lot of electricity for vaporization and water for condensation. It is a slow process, and monitoring product water quality is difficult. There is also the issue of accumulation of minerals from hard-water feedstock on the heating element, requiring frequent cleanings.”

According to Riché, the minimum requirements for high-level biological work is high-purity water that is free of bacteria. Beyond that, for work involving enzymes (including PCR and library preparation for sequencing), water should be free of metal ions and organics, and for work with DNA/RNA, it should also be free of nucleases. The increasing amount of supersensitive work that relies on fluorescence or mass spectrometric detection demands organic- and metal ion-free water. Even cell culture may be affected by trace contaminants. In other words, when in doubt, use type I water.

“We tend to think of water contaminants as five main families; for example, particles, organics, inorganic ions, bacteria, and gases, all of which may affect experimental results, depending on the assay,” Riché adds.

The production of type I water requires several orthogonal purification steps. Stand-alone type I generators use type II or III water as feedstock. Other systems can be connected directly to tap water and produce type II (or type III) water, in addition to type I water.

The pretreatment step may involve treating tap water by reverse osmosis and electrodeionization. Optional ultraviolet treatment inactivates any bacteria remaining in the water. For the polishing step, EMD Millipore’s Milli-Q system employs ion-exchange resins, activated carbon, and ultraviolet photo-oxidation. This can be followed by microfiltration (through a 0.2 μm membrane) to remove particles and bacteria, or ultrafiltration which also removes nucleases and endotoxins.

For additional resources on lab water systems, including useful articles and a list of manufacturers, visit www.labmanager.com/labwater

From Seawater to Drinking Water, with the Push of a Button

From Seawater to Drinking Water, with the Push of a Button

Smart Coatings in the Pipeline Remove Mercury from Water

Smart Coatings in the Pipeline Remove Mercury from Water