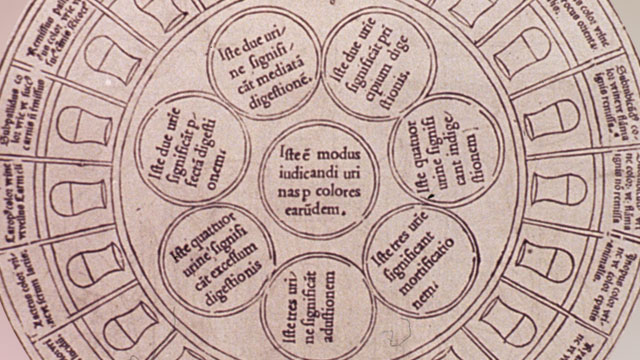 The Urine Wheel was used for diagnosing diseases based on the color, smell, and taste of the patient’s urine in the early 16th century.

We tend to think of the long course of medical history before the advent of conveniences like anesthesia, antibiotics, and vaccines as the Dark Ages—a vast epoch dominated by superstition when otherwise sober professionals addressed illness and outbreak by applying trepans and scarificators, venting humors and spleen. The truth is, however, more complicated, with plenty of evidence of human perspicacity before industrial and technological revolutions took hold. One interesting case in point is the diagnosis of some metabolic diseases, understood for at least 3,000 years to manifest themselves in the color, smell, and taste (!) of urine. The disruption of glucose metabolism in diabetics has long been identified using sweet-tasting urine as a surrogate, a precursor to today’s biomarkers that was independently noted by ancient Greek, Arab, and Chinese cultures. It was codified along with other observations concerning color and odor—their merits and portents—in a urine wheel that marked perhaps the first published application of the scientific method in medicine, Epiphanie Medicorum, in 1506.

The necessity for tasting bodily fluids began to dwindle with the rise of gas chromatography, which allowed the first reproducible separation and identification of individual volatilized compounds on the basis of molecular mass by pushing them within a mobile gaseous column over a stationary, nonvolatile solvent. James and Martin used this principle to separate fatty acids in the early 1950s. Linus Pauling’s research group was later among the first to identify the potential for this technology to impact medicine. He and his colleagues demonstrated the collection, concentration, and separation of volatile compounds from human breath and urine samples in a 1972 paper. Thus, the field of metabolomics was born.

Metabolomics is the study of the sum total of small molecules in biological samples, and therefore aspires to provide an accurate snapshot of homeostasis, or of pathological dysfunction, within a given biofluid, cell, or tissue. Metabolites are entities with molecular weights of less than one kilodalton and can encompass many different classes of molecules, including peptides, amino acids, lipids, protein degradation intermediates, and exogenous compounds acquired through ingestion, inhalation, or drug metabolism.

Metabolomics resides atop a Mount Rushmore of “omics” disciplines, along with genomics, transcriptomics, and proteomics. Among them, it is: 1) the most amenable to continued innovation and optimization; and 2) perhaps the most potentially useful for precision and personalized medicine because of its intrinsic ability to characterize and quantify phenotype. Present studies and future goals seek to achieve the following: 1) improve technology, protocol, and instrumentation to allow higher accuracy and throughput; 2) provide comprehensive molecular signatures that can define cell and tissue types, especially for systems biology analysis; 3) identify and quantify biomarkers that can lead to early prediction and diagnosis of disorders including cancer and diabetes; and 4) refine drug discovery and pharmacokinetic studies that can lead to novel drug candidates and save essential resources early in preclinical and clinical testing of dosage and safety.

Although it is not currently feasible to measure the entire metabolome using a single analytical method, innovation and variation in techniques have brought about drastic improvement in throughput and fidelity, with advances in execution and scale among the three parent platforms that can be used in metabolomic studies. Proton nuclear magnetic resonance (NMR) allows direct measurement of compound spectra within a sample. Although data from NMR is highly reproducible, the complex nature of biological samples causes this method to lack resolution and throughput in comparison with mass spectrometry (MS) methods. Both gas chromatography (GC) and liquid chromatography (LC) precisely quantify the composition of ionized analytes based on mass-to-charge ratios and require column-based separation of samples before analysis. Different separation methods govern procedures depending on variables including size and polarity of metabolite classes of interest. GC-MS is fundamentally more limited in its scope because not all samples can be accurately measured in a volatilized form. In contrast, LC-MS accommodates liquid and solid samples, highlighting its use in metabolic studies that are often based on cells and biofluids such as urine, blood, and plasma.

Therefore, the gold standard in metabolomics currently runs through LC-MS, in which samples are most often subjected to electrospray dual ionization to generate both positively and negatively charged species. The LC step is the most important in the sense that sample preparation and subsequent separation consume the most time and introduce the most variability into analysis. There are several different versions of LC that are optimal for separation of different types of metabolites, including: 1) reverse-phase liquid chromatography, which uses hydrophobic columns to separate semi-polar molecules such as phenolic acids, flavonoids, and glycosylated compounds; 2) hydrophilic interaction liquid chromatography, which uses aminopropyl columns to separate polar compounds such as sugars, amino acids, and vitamins; 3) multidimensional liquid chromatography, which uses two or more independent separation techniques to maximize coverage; and 4) ultrapressure liquid chromatography, which is a variation that has gained preference because its doubling of flow rate and halving of particle size in the stationary phase allows for higher resolution in large-scale metabolomics studies.

The potential of LC-MS-based metabolomics is immense, as is the associated cost of dedicated instrumentation. For researchers and core facilities with a dedicated interest in metabolomics, manufacturers have begun to innovate equipment with both greater throughput and smaller footprints, especially on the front end of LC-mediated separation. One of the most appealing examples of this is the StreamSelect system by Agilent (Santa Clara, CA), which allows parallel separation via four independent LC devices that stream into one quadrupole mass analyzer. One advantage of this system is that it avoids the frequent sample and data loss issues that can plague LC-MS runs, allowing for samples to be diverted to functional streams while compromised ones are repaired on the fly. Finally, improvements in LC-MS technologies have funneled into a growing industry, with open-source informatics databases like HMDB and METLIN providing broad coverage of known molecules and standards, and the evolution of at-home and in-office omics service contractors such as Metabolon providing metabolomics-based precision medicine to institutes, patients, and consumers.

For additional resources on LC-MS, including useful articles and a list of manufacturers, visit www.labmanager.com/lc-ms