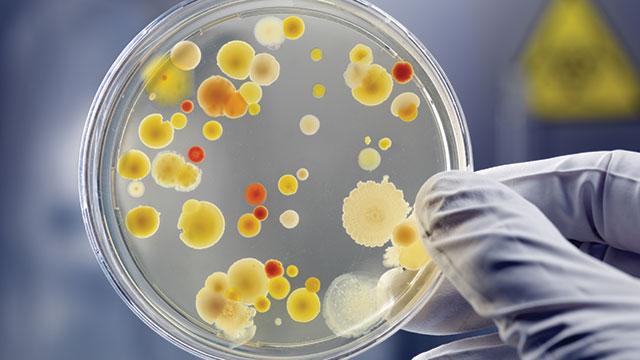 In 2013 in Nature Reviews Microbiology, Pierre- Edouard Fournier and his French colleagues wrote, “In the twenty-first century, the clinical microbiology laboratory plays a central part in optimizing the management of infectious diseases and surveying local and global epidemiology.” They added, “This pivotal role is made possible by the adoption of rational sampling, point-of-care tests, extended automation, and new technologies, including mass spectrometry.”

Mass spectrometry (MS), though, comes in many forms. The most common type of MS used in clinical microbiology is called matrix-assisted laser desorption ionization time-of-flight mass spectrometry (MALDI-TOF MS). Another type, called PCR electrospray ionization mass spectrometry, turns PCR-amplified DNA into an aerosol, which is analyzed with MS to determine what has been amplified. This approach can be found in a system called IRIDICA—from Illinois-based Abbott—for direct detection of microorganisms in clinical specimens.

MALDI-TOF MS is a useful approach for identifying colonies of bacteria or fungi. With this technology, the sample is mixed with a matrix and exposed to a laser, which vaporizes and ionizes the sample. The time it takes for the charged particles to reach the detector—the time of flight— depends on their mass-to-charge ratio. Two main companies offer MALDI-TOF MS platforms for clinical microbiology: Massachusetts-based Bruker and France-based bioMérieux.

In addition, MS adds accuracy. With MALDI-TOF MS, for example, Patel says, “You can get the right identification.” In addition, you don’t need to know what you’re looking for, be it bacteria or fungus, for instance. The MS output tells you what it is, and very precisely. According to M. Alain Pluquet, corporate vice president and chief technology officer, innovation, for bioMérieux, “Typically for bacteria in a clinical application, the rate of correct identification is 97 percent.”

Beyond that great technological leap, MALDITOF MS also brings an economic incentive to clinical microbiology. Patel says, “It’s cheaper than the past techniques, which required biochemicals, as well as sequencing-based approaches.” Consequently, this technology even changes the workflow in a clinical microbiology lab. Pluquet agrees about the economy. He says, “Basically, identification with MS costs almost nothing.” He adds, “You must buy the machine, but there are no reagents—just slides for the specimens.”

Overall, Patel says, “MALDI-TOF MS is faster [and] cheaper, and it provides for most organisms—not all—the ability to identify an infectious agent more accurately than anything that we had previously.” She adds, “It has changed our clinical practice.”

Not only does MALDI-TOF MS provide fast and accurate answers, but the technology is also easier on the technicians. In addition, “easy to use” is a phrase often attached to MALDI-TOF MS.

Patel says that sample preparation is “super easy.” As she explains, “You take a colony on a plate, use a stick to sample the colony material, put it on a MALDI-TOF MS plate, overlay it with some chemicals, let it dry, and that’s it.”

Even that will be automated one day. Pluquet says, “You will have an autoprep station, so that you can spot slides in minutes with virtually no skill.” That will make this technology incredibly easy from the start.

Although many experts call ESI-MS easy, too, Pluquet says that it’s not as easy as MALDI, a technology bioMérieux has adopted for its MS-based bacterial identification system, VITEK MS. “ESI is more complex,” he says, “The workflow and cost and quality are not comparable to MALDI.”

It’s not just the preparation that matters, but also the analysis. Today’s commercial platforms for using MALDI-TOF MS in clinical microbiology include onboard databases. The system runs the results against the database and puts out an answer. “You don’t even need to look at the mass spectrum,” Patel says.

That database needs to be good and well curated. It must be as representative as possible and kept updated. Still, Patel says, “You can’t identify everything out there, because there are bacteria and fungi that aren’t in the databases.” In addition, if something is not in the database but is similar to something that is, that can cause a misidentification.

The world’s health care systems need these sorts of advances to keep up with the changing world of infectious diseases. As the agents evolve, the technology must adapt. In addition, making this technology easy to use greatly expands the range of use. For example, these forms of MS could be used in developing countries that lack trained technicians. Likewise, these platforms could identify elements of bioterrorism around the world. Public health officials can also apply this technology to epidemiology and, it is to be hoped, identify a local outbreak before it spreads into a pandemic. All these applications benefit from MS, and more surely lie ahead.

For additional resources on mass spec for clinical microbiology, including useful articles and a list of manufacturers, visit www.labmanager.com/ms