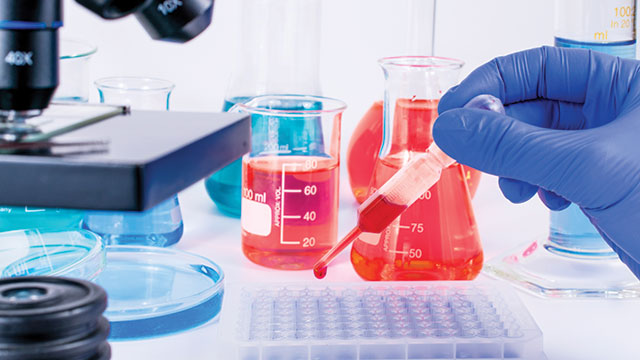 Immunoassays span the spectrum of analytical biology, from basic research through medical diagnosis. They work through the affinity of an antibody to the target analyte, an event that activates a light-emitting dye whose emission is the signal or readout.

Dozens of companies sell immunoassay antibodies and reagent kits, but antibodies do not exist for every conceivable analyte. When commercial antibodies are unavailable, investigators must generate their own through a costly, time-consuming process.

Antibodies are known for their exquisite target specificity, but many cross-react with structurally related molecules, which may be metabolites of the original target. Moreover, changes in pH or buffer salt concentration can alter the conformation of the binding site, rendering it unrecognizable.

“As we come to understand the deeper complexities of biology and the capabilities of current analytical technologies, we’re beginning to recognize some of the shortcomings of immunoassays,” says Andrew Peck, PhD, senior manager for business development at Waters (Milford, MA).

Hence the growing interest in mass spectrometry (MS) to complement or replace immunoassays. MS does not require antibodies or reagents, and its readout directly quantifies a wide range of molecules. The main drawbacks of MS are a high initial acquisition cost, a relatively high-level skill requirement, and, in clinical settings, difficult adaptation to random-access mode.

Proteins often exist in several physicochemical forms, including isoforms and isomers, which immunoassays erroneously report as homogeneous. Modifications also occur that render epitopes unrecognizable. Small molecule analytes and metabolites are particularly challenging for immunoassays, but this is where MS shines.

Since MS measures molecular weights, operators can tune into a specific weight range to quantify everything within that window, thus identifying and characterizing major and minor modifications in ways that immunoassays cannot.

The major impediment to MS as a go-to replacement for immunoassays lies in the additional workflow needed for large proteins. When molecular weights reach 2K Da and high sensitivity from complex matrices are needed, analysts adopt a surrogate approach involving enzymatic digestion to break large proteins into peptides that are unique to the parent protein. Software deconvolutes the tryptic digest to provide the molecular weights of the major isoform and relevant variants arising from additive and subtractive post-translational changes.

“Sample preparation methods are constantly improving, but it’s still an extra step in the MS workflow for large molecules on a typical tandem quadrupole system,” Peck notes. Operational issues exist as well. MS had a reputation for complexity, high cost, and requiring a high skill level for operators. Facing these significant hurdles to adoption, major manufacturers have improved instrument accessibility and usability, even for previously inaccessible clinical markets. Waters, for example, pioneered MS-based diagnostics and was the first MS manufacturer to obtain 510(k) clearance for an MS diagnostic kit, the MassTrak Immunosuppressants kit for quantifying the antirejection drug Tacrolimus.

“But clinical labs have been built around immunoassays, where random access is a huge economic driver,” Peck notes.

Random access refers to the ability to run tests in any order from any sample. Currently available MS instruments are incapable of random access and instead run in batch mode, where the system tests for one analyte multiple times. Different configurations would normally be required to run tests for steroids and, say, C-reactive proteins. The requirement for protein digestion also throws a monkey wrench into the idea of routine analysis of medically relevant proteins.

On the other hand, MS can perform multi-analyte analyses, provided the target molecules are similar enough—for example, a drug and its metabolites or steroid hormones plus their precursors and metabolites. Multi-analyte capability provides a powerful means to measure the alterations along a multi-molecular pathway.

From a clinical lab’s perspective, one could also imagine several MS instruments in proximity, each covering an assigned region of diagnostic molecular space and together serving some reasonable percentage of a clinical lab’s needs.

The strengths of MS in this regard are sometimes unfairly portrayed as a weakness. A recent article noted negatively that results using Waters’ MassTrak assay for Tacrolimus did not agree with immunoassay results. Although the authors did not state it directly, the implication was that MS numbers are somehow suspect.

“There are many examples of this, a result of the negative bias of MS in these settings,” Peck explains.

Negative bias arises from the ability of MS, relative to immunoassays, to distinguish between closely related forms of a molecule. Where an immunoassay might provide one signal for molecule A and its metabolites, MS distinguishes them, thus appearing to under-report levels of the molecule of interest. So, if an antibody recognizes an epitope present in both Tacrolimus, which is active, and its inactive metabolites, the immunoassay will over-report the parent compound.

This raises interesting questions for healthcare generally, and for physicians who currently rely on immunoassay testing to dose patients for chronically administered drugs. “Physicians are used to seeing and dosing patients based on a number, but when you show them what’s behind the immunoassay reports, they’re surprised. They realize they may be under-dosing patients because immunoassay is measuring not just the drug, but its inactive metabolites as well,” Peck says.

Replacing clinical immunoassays with MS will take work, but eventually the technology and application will settle into a comfortable equilibrium. But what about for research applications, currently the largest user base for MS?

In a review of the state of MS in traditional immunoassay territory and the potential to replace the older technology, Timothy Cross of Thermo Fisher Scientific (Waltham, MA) notes that “further developments to the technology are needed” before MS can be considered a general replacement. For routine testing, immunoassays are simpler and cheaper, but objectively, MS is superior, he writes. On that basis, Cross predicts an increase in MS usage over immunoassays.

Peck concurs. “It’s all about timelines and the potential for MS to address one aspect of the reproducibility crisis in the life sciences.” Peck is referring to the widespread lack of authentication for cell lines and, in this context, antibodies on which the reliability of immunoassays depend. “As Leonard Freedman revealed, bad antibodies are the single largest contributor to the current reproducibility crisis in biomedical research.” Or, as noted in a 2015 editorial in Nature, “Antibodies are the workhorses of biological experiments, but they are littering the field with false findings.”

For additional resources on mass spectrometry, including useful articles and a list of manufacturers, visit www.labmanager.com/mass-spectrometry