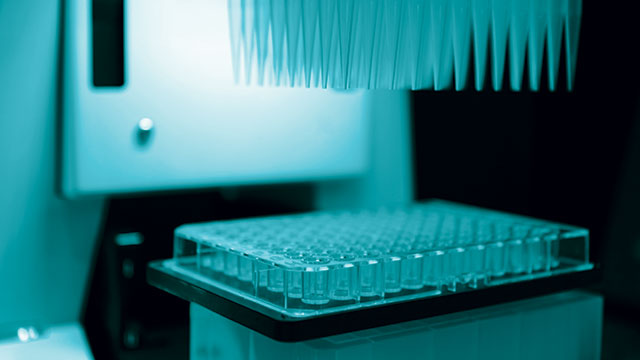 Faced with a plate of multiple wells, a scientist in search of proteins often turns to automated methods. The likely tasks range from confirming the presence of a specific protein to quantifying or isolating it. Using a process that includes a handler makes the results easier to collect as well as more accurate and repeatable.

In a pharmaceutical company’s bioanalytical labs, scientists typically know which proteins are of interest. Then they build targeted methods for them and use microplate handlers to do the sample preparation, says Kevin Bateman, distinguished scientist at Merck & Co. (West Point, PA). “We typically work in 96-well plates and focus on targeted quantitation of endogenous or exogenous proteins.” A liquid handler performs most of the processing—aliquoting unknown samples, preparing standards and quality control samples, and adding reagents for affinity capture and protein digestion. “Attributes that are important for this work include accuracy and precision of the liquid-handling steps, robustness of the system, and ease of use for the operator,” Bateman explains.

Increasingly, scientists are exploring functional genomics, which look not only at what genes are in an organism but also at what they do. In particular, scientists want to know how genomic changes impact other processes. As an example, one can study the effect of a DNA mutation on all of the biochemical pathways in a sample, says Gisela Canales, Pacific Northwest account manager at Hudson Robotics (Springfield, NJ).

Such binding assays depend on careful procedures. As Burtsoff-Asp notes, “For the screening processes, it’s recommended to use a microplate seal to avoid evaporation from the sample/reagent microplate that could impact the results and cause high coefficients of variation for the data generated.”

Researchers often need tools to pick out low-affinity proteins. As an example, GE’s Biacore 8K SPR biosensor system identified fragments of NS5B—a viral polymerase involved in the replication of hepatitis C—at low millimolar affinities. In that research, this system screened 500 fragments in 20 hours. The Biacore 8K can also be used in many other applications, such as determining the role of hemoglobin-related peptides in glucose regulation.

Protein studies often require many samples; for example, clinical studies require samples collected across a population of patients. Canales points out that her company’s technology can rapidly process multiple samples in an automated fashion, including scheduling multiple assays in parallel.

Nonetheless, testing more samples can raise the bar on managing the results. As Canales notes, scientists must be able to analyze the large amounts of data generated in an easy, measurable way. Using Hudson Robotics’ PlateCrane and Intellicyt iQue system, says Canales, helps scientists keep track of many variables and complex results in, for instance, antibody development or protein interactions in single-cell assays.

Other suppliers also develop systems to help researchers work with microplates of proteins. For instance, Maryann Shen, automation solutions marketing manager at Agilent Technologies (Santa Clara, CA), says that her company serves many users who are doing protein-affinity purification in a plate format. She adds, “Specifically, they are using the Agilent AssayMAP Bravo platform and the Protein A, Protein G, and Streptavidin cartridges to purify specific targets of interest.” This system automates the simultaneous analysis of from one to 96 samples. The purified samples can be analyzed with liquid chromatography followed by mass spectrometry (LC-MS). This, says Shen, can be used for characterization, pharmacokinetic studies, and more.

When using protein-affinity purifications in high throughput, consistency and reproducibility can become challenging—both between samples and technicians. “The Agilent AssayMAP Bravo platform provides a unique approach in which these experiments are handled in a plate format and fully automated,” Shen explains. “This approach has allowed researchers to achieve outstanding reproducibility.”

Some of the foundation of microplate handling involves flexibility and integration. As an example, Lesnick says the Labcyte Access Laboratory Workstation can automate a wide range of assays, including quantitation, activity, and protein reporter assays. As Lesnick notes, “Automated workstations are also being used to combine techniques from synthetic biology with protein screening.”

In many of these applications, the key challenge revolves around integrating various platforms and timing the exchanges of samples and processes. “Systems that integrate microplate handlers with other devices use software to schedule tasks to be performed by each device,” Lesnick explains. “The complexity of some protein assays, including incubation and other processes, can be challenging for scheduling software, as the number of plates to process increases for large-scale screening.”

As an example of integrating the automation of microplate processes with other technologies, Lesnick describes how Labcyte and AstraZeneca (Cambridge, UK) are collaborating to develop an acoustic-MS system that directly loads a mass spectrometer using acoustic liquid-handling technology developed at Labcyte. “This system will offer the ability to automate label-free screening and has demonstrated the ability to process three samples per second—significantly faster than anything on the market today,” Lesnick says.

Getting the most from analyzing proteins in microplates will keep requiring teamwork. Many platforms must work together, and that requires hardware and software that combine in a system and work as one.

For additional resources on microplate handlers, including useful articles and a list of manufacturers, visit www.labmanager.com/microplate-tech