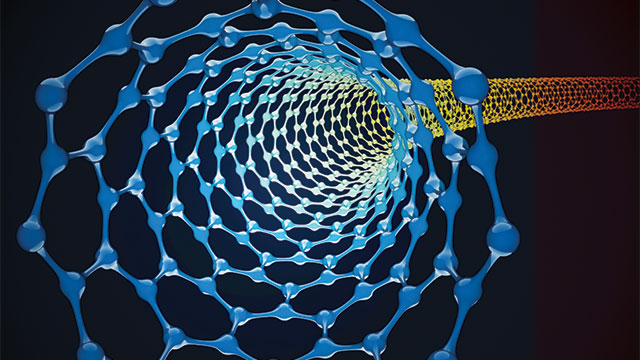 Getting smaller can be a good thing for high performance liquid chromatography (HPLC). In fact, nano-HPLC delivers some lab-changing benefits to scientists. The key is all-around scale. Whereas traditional HPLC flow rates go as low as a few hundred microliters per minute, that metric drops to the nanoliter range in nano-HPLC. “That smaller scale means that everything needs to be downscaled,” explains Remco Swart, director of LC/ MS technologies at Thermo Fisher Scientific in Waltham, Massachusetts.

The LC columns reveal some of the key features of the changes in scale. For example, HPLC’s traditional columns are a couple of millimeters across inside, and nano-HPLC relies on columns with an internal diameter of just 75 micrometers. Consequently, the injection and flow rates must be adjusted accordingly. “You can see the stream of the eluent in traditional HPLC,” says Pat Young, senior product manager at Waters Corporation in Milford, Massachusetts. “If you examine the end of a nano-HPLC column as the sample elutes, you never actually see even a drop formed.” That shows just how much the flow rate is decreased in nano-HPLC.

Pushing down the HPLC scale, however, pushes up the possibilities. “The main reason for going to nano-HPLC is if a customer is limited in the amount of sample available,” says Swart. “There are areas where scientists want lots of information from limited samples.” Nano- HPLC makes that possible.

Down to the details

With a smaller internal-diameter column, nano- HPLC keeps the sample more concentrated, rather than its being relatively diluted across a wider column. Nonetheless, the smaller scale creates complexities in connecting the parts. To simplify this process, Thermo Fisher Scientific developed its nanoViper fittings. As Swart says, “With these, you make toolfree connections and eliminate dead volume easily to maintain the separation quality all the way into the detector.” He adds, “It lets you make nano-LC measurements in an easier way.”

Waters also created technology that makes it easier for scientists to use nano-HPLC. “We created the ACQUITY UPLC M-Class to do nano-flow for 75-micrometer columns all the way up to 100 microliters per minute for 1-millimeter internal diameter columns,” says Young. “It’s a direct nano-flow system so you don’t have to fuss around with things.” In addition, Waters’ ionKey/MS system integrates a 150-micrometer internal diameter separation into the source of the mass spectrometer.

The decreased size in nano-HPLC delivers increased sensitivity. Although the magnitude of the sensitivity increase depends on the experimental conditions and analytes, in comparing traditional and nano-HPLC technology, says Swart, “a ballpark improvement in sensitivity of a few hundred times should be able to be realized.”

In addition, nano-HPLC creates more efficient ionization of the sample and allows some simplifications. “Because of less flow, there is no need for nebulization gas,” Claise explains.

When a scientist wants to identify and quantify the proteins in complex samples, like biological fluids, nano-HPLC provides the needed sensitivity. As Young says, “Proteomics is the sweet spot for micro- and nano-HPLC.” She adds, “Whether targeted or untargeted this application requires a wide dynamic range.”

In fact, Susan San Francisco, research associate professor at the Center for Biotechnology and Genomics at Texas Tech University in Lubbock, says, “Our lab has used nano-HPLC mostly in proteomic work.” She says that nano-HPLC offers many useful advantages for her lab’s work, including greater sensitivity and the use of less solvent. Nonetheless, she also points out several shortcomings of nano-HPLC, including the limited kinds of columns available. She adds, “Nanospray can be a bit less stable for downstream MS, and you must have a low-volume injector or trap system.” So nano-HPLC won’t always be the best choice, although it is worth considering in an increasing number of applications.

Beyond proteomics, San Francisco says that her lab has also used nano-HPLC for “a small amount of targeted small molecule separation.” Others also point out that nano-HPLC works out well in various applications. As an example, Swart says, “Biopharma needs to find biological drugs in complex matrices, like serum, when studying the impact of a drug.” Nano-HPLC works well in this bioanalytical application. As Claise says, “Over the past decade, lots of papers have shown the benefits of low-flow LC for bioanalytical work.” He adds, “Work in lipidomics and metabolomics is also pushing toward micro- and nano-flow HPLC.”

Although nano-HPLC started as a technology for experts, new commercial products carry it to other scientists. As Swart says, “A lot of universities these days have this technology in their labs.” In fact, the available technology brings nano-HPLC to nearly any lab. In addition, the technology is now easy and robust enough for other environments, such as industrial LC-MS laboratories. In any technology that goes from expertbased to the scientific masses, you never know how far it will go, and that is currently the case for nano-HPLC.

For additional resources on nano-HPLC, including useful articles and a list of manufacturers, visit www.labmanager.com/hplc.