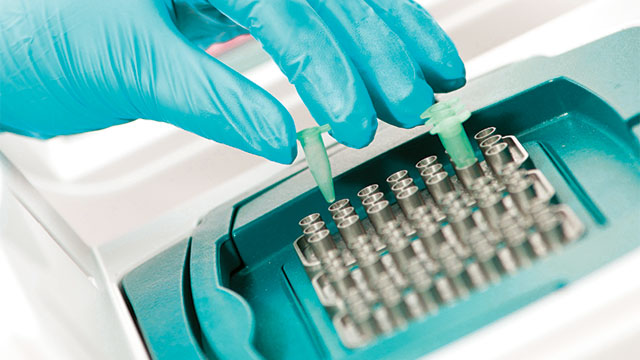 PCR gives a “yes/no” answer at the end of amplification, whereas qPCR detects product in real time as it is being amplified, hence the “RT” and “q” designations. qPCR amplification curves generated from fluorescence detection provide an accurate measure of how much material the analyst began with. By contrast, conventional or “end point” PCR results are visualized through gel electrophoresis, and thus give at best semiquantitative measurements through the use of gel standards.

“With normal PCR, when you look at a gel at the end of a process it doesn’t matter how much material you started with—you’ll still get a big bright band,” says Rod Pennington, PhD, senior research scientist at Promega (Madison, WI). “With qPCR you can extract information that tells you what that starting amount was over a scale of many orders of magnitude.”

The amplification curve is the principal indicator that a qPCR reaction has proceeded satisfactorily—or not. It is generated by exciting the fluorescence labels and quantifying the response by application of a software algorithm to generate a curve whose shape is diagnostic.

Since it is based on fluorescence detection, qPCR is capable of detecting multiple genetic targets in the same reaction or sample and can quantify their proportions. A useful application of this capability is determining male/female or human/nonhuman genetic elements.

These factors commonly result in noise or delayed amplification curves. Delays generally indicate low target concentration, but can be due to poor amplification efficiency. Noise is somewhat more complex, as it may arise from the amplification of unwanted targets due to poor primer design, suboptimal temperature cycling, or other factors.

“A delayed amplification curve is not always bad, but you’d normally prefer robust amplification where you generate a solid curve from a minimal amount of target,” Pennington says.

Troubleshooting qPCR involves testing conditions and components known to affect PCR efficiency. These include annealing temperatures, magnesium chloride and primer concentrations, and others. Operators can almost always resolve these problems, and the experimentation is usually not resource-prohibitive.

Working in a 96-well qPCR plate enables investigators to test several factors simultaneously. “That’s a large number of parameter combinations that you can test, even with replicates,” Pennington notes.

Related Article: How to Choose the Right PCR Reagents

Instead of using a plate reader, the troubleshooting experiment runs inside the qPCR instrument, which provides incubation, temperature cycling, and fluorescence measurement. Depending on the depth of a particular issue parameter, testing takes anywhere from a few hours to several days.

“That’s where everyone starts. Then, if results are not what they expect, if they don’t achieve satisfactory amplification, that’s when they begin an optimization exercise.”

Depending on the primers, reagents, and target, PCR reactions may be more or less sensitive to reaction conditions such as salt and magnesium concentrations, or carryover ethanol from sample preparation. “Labs employing homebrew DNA preparation methods may notice variability among tubes or wells,” says Sharon Rouw, product manager at Sigma-Aldrich (St. Louis, MO). “Errors also increase as protocol rigor goes down, particularly in multiplex reactions that seek to amplify more than one target.”

For labs used to making up their own reagents, troubleshooting may be as simple as purchasing reagents that are formulated to strict concentration standards. “Vendors provide consistency up front. They QC and test their products so users don’t have to worry about those issues derailing their efforts. It’s one less thing to worry about.”

PCR has advanced to the point where vendors now offer reagent kits containing buffers and enzymes that are less sensitive to reaction conditions, for example magnesium or ethanol concentrations. “That’s not to say you shouldn’t take care when running PCR with these kits,” Rouw warns. “Think of them as just one way to ensure reproducibility under lessthan- ideal conditions.”

PCR is sensitive to contaminants, so operators should wear gloves, use PCR-grade water and super-clean glassware, and work inside a clean area. Environmental contaminants— acids, bases, ions—can affect PCR through inhibition of polymerase enzymes, resulting in less vigorous amplification (or “slower” curves for qPCR). Again, some reagent kits are designed to be less sensitive to contamination effects.

A common advanced problem involves sub-optimally designed primers. “Primers that are not unique and strongly binding to the target gene will recognize a similar sequence, latch on, and amplify that region, lessening reaction efficiency and increasing background,” Rouw warns.

Operators can overcome amplification bias by redesigning their primers for optimal target selectivity. Running each amplification singly will shed some light on potential efficiency mismatches. If bias cannot be overcome using different primers or through protocol adjustments, simply understanding the nature and extent of bias may be enough.

“Primers are arguably the most important tool in PCR,” Rouw says. “If your primers are well-designed, other sources of error become less important.”

For additional resources on polymerase chain reaction, including useful articles and a list of manufacturers, visit www.labmanager.com/pcr.