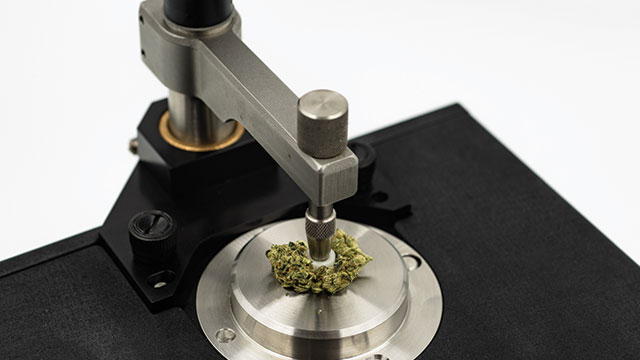 As prospects for legalized cannabis improve, equipment suppliers and gatekeepers of compendial standards must play catch-up to develop sample preparation methods suitable not only for this unique market, but also regulators.

Activity in sample prep will closely track instrumental methods as they emerge or are introduced. Although liquid chromatography (LC) and mass spectrometry (MS) will likely become the workhorses of cannabis testing, the field is ripe for innovation in instrumentation, which will directly affect how sample prep is carried out.

For example, Brian Smith, PhD, CEO of Big Sur Analytics (Capitola, CA), has introduced BSS 2000, a cannabis analyzer based on mid-infrared (mid-IR) spectroscopy. The BSS 2000 is portable, easy to use, and provides cannabinoid and terpene profiles within two minutes.

One might wonder why, with gas and liquid chromatography readily accessible, and hyphenated mass spectrometry one additional purchase order away, anyone would bother with a legacy technique like infrared, with its complicated “fingerprint” spectra.

According to Smith, the complexity of IR spectra is irrelevant for quantitation. “As long as peaks vary with concentration, one can usually obtain a quality calibration. Besides, IR spectra are no more complicated to interpret than NMR or mass spectra, and people can read my column1 or one of my books2 to get better at it.” Before NMR, LC, and MS, infrared was the leading analytical mode for organic chemists, and it remains one of the least expensive instrument acquisitions. Aided by advanced algorithms, current instruments identify and quantify, and do not require pure samples. “Mid-infrared quantifies tetrahydrocannabinol (THC) and cannabadiol (CBD), marijuana’s psychoactive and medicinal components, as well as other plant compounds, oils, and most products that cannabis companies are interested in,” Smith says.

Prepping samples for chromatographic analysis involves weighing, grinding, extraction, vortexing, dissolution, filtering, and often even more steps. When combined with attenuated total reflectance sampling, mid-IR requires little in the way of sample preparation, yet mid-IR is quantitative. “For liquids, just apply the sample and scan,” Smith says. “Solids are simply clamped to the sampling window before scanning, although some require grinding.”

Physical inhomogeneity is the first challenge analysts face with plant samples. Given the complexity of the cannabis value stream, labs are often looking to quantify several cannabinoids. Non-cannabinoid constituents like lipids, acids, metals, and adulterants are also involved, with varying degrees of impact on product quality.

“Add to this complexity the fact that plant tissues sequester constituents of interest at different levels,” Smith says. “Cannabis consists of leaves, seeds, and flowers, but most analytical methods require the sample to be in solution at the correct concentration range. So the ultimate challenge for sample prep is to turn the non-homogeneous material into a homogeneous solution. It’s a nontrivial, multi-step process.”

On top of sample issues, laboratories must deal with national prohibitions and widely variable local laws. Cannabis products are generally illegal in the United States, so shipping even tiny samples with THC concentrations above 0.3 percent is a federal crime carrying stiff prison terms. Laboratories used to purchasing reference standards from the U.S. National Institute for Standards and Technology (NIST), or shipping samples to colleagues in the next state for validation purposes, hit a dead end with cannabis.

“NIST has an official, traceable green tea standard that has been well analyzed, but the agency cannot get involved in cannabis testing,” Smith says. The nongovernmental standards organizations USP and AOAC have, however, initiated cannabis analysis programs.

Lack of contact among researchers and analysts has led to method fragmentation. “Nobody does anything the same way,” Smith laments. “Everyone has LCs and GCs that are exquisitely calibrated with pure standards, but if your sample prep is off, your numbers will be meaningless.”

In one study3 aimed at identifying pesticides using the standard QuEChERS4 method developed for produce, Smith submitted identical samples to five state-certified cannabis testing labs, which failed to detect close to 80 percent of the adulterants. Smith attributes these failures to variations in sample preparation.

“Different labs take different quantities of plant materials, grind them differently, dissolve them in different solvents at different concentrations, and then vortex, shake, filter, and store the samples however they think is best,” Smith explains. “This variability makes a huge difference, even when labs analyze the same samples.”

Smith continues, “Part of the problem is the cannabis industry has inexperienced people running labs and analyzing samples. Cannabis is medicine, so we should test it like medicine. This means states should require the same education and experience levels for cannabis analysts as the FDA does for the pharmaceutical industry. At minimum, there should be an experienced analytical chemist in charge of each lab. The five labs that couldn’t detect the pesticide we spiked the samples with were all state-certified and held ISO certification as well.”

Professor Doug Raynie, a “green” chemist at South Dakota State University (Brookings, SD), notes that QuEChERS was developed by USDA chemists for analyzing pesticides in produce, not in cannabis. “The original method was validated for pesticides across a range of produce. Since then, continued development has improved the ability of QuEChERS to accommodate high levels of fats and pigments. Since it is robust and easy to perform, QuEChERS will likely emerge as the go-to extraction method for the isolation of pesticides from cannabis samples as well.”

We’re not there yet, as Smith’s study demonstrated, but since QuEChERS originally targeted plant-based materials one can expect improvements.

“I suspect as the demand for cannabis analysis increases, vendors will offer cannabis-specific QuEChERS kits,” Raynie adds. “The beauty of QuEChERS is that it is a single-sample preparation method to isolate all pesticides of interest.”

“Sample prep for these methods differ widely,” Shelton explains. “For water activity/moisture, we use a hand grinder; for bacteria testing, we put the sample in media solution, then plate and incubate for 24-48 hours. The media we use for salmonella is different than the media for other organisms, for example mycotoxins. For pesticides, we use a variant of QuEChERS using acetonitrile solvent and solid phase extraction. We extract terpenes and cannabinoids with alcohol, and for solvents we utilize headspace injection and gas chromatography with flame ionization detection.”

Extraction of some kind is nearly universal, but care must be taken not to miss anything. “Because cannabis is such a complex matrix, pesticides and mycotoxins are difficult to extract because of their low concentrations. Even cannabinoids are difficult to deal with, particularly for cannabis edibles, because so many other ingredients could exist in the product. As a lab, our goal is to break these sample matrices down without compromising the actual THC or CBD we are trying to detect.”