Comprehensive two-dimensional GC (GCxGC) is a powerful gas chromatographic technique that uses two columns to achieve separations of complex mixtures that would not be possible with a single column. Because of its complexity, GCxGC requirements for system, column, detector, and data handling differ from those of conventional, one-dimensional GC systems.

GCxGC employs an injector as does one-dimensional GC. But instead of one column, GCxGC employs two columns with orthogonal or complementary resolving capability. The second column is generally much shorter than the first. During a GCxGC run, the effluent of the first column is concentrated and introduced, in defined cycles, onto the second column through a process known as modulation.

Columns may be located in the same oven or in two different ovens for temperature programming versatility. In practice, the ovens usually are ramped in sync, with the shorter second column approximately five degrees higher than the first column to ensure vaporization of cuts from the first dimension.

A Restek (Bellefonte, PA) method for determining polyaromatic hydrocarbons (PAHs) in seafood employs a typical setup based on differing affinities to aromatic structures. Column one uses a 30-meter Rxi®-17Sil MS (50% phenyl, 50% dimethylsiloxane) stationary phase, while the second column is just 1.2 meters long and carries an Rxi®-1ms (100% dimethylsiloxane) stationary phase. The high phenyl content of column one provides more of a “like dissolves like” affinity for aromatics than column two, and is slightly more polarizable as well.

“GCxGC is more comprehensive than other 2D methods, because everything that comes off the first dimension goes into second dimension,” explains Michelle Misselwitz, a Restek innovations chemist. GCxGC has become a go-to method for analyzing complex mixtures like crude oil or metabolomics samples. “GCxGC pulls analytes apart in a way that’s impossible with one dimension.”

For example, a mixture of aliphatic and aromatic compounds requires fractionation before single-column analysis, where GCxGC resolves the analytes through a single run. 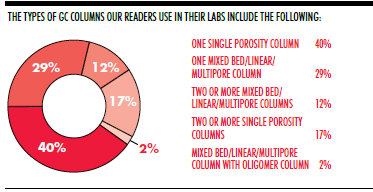 Modulation: The heart of GCxGC

By bridging the two columns, the modulator is arguably the most critical component of a GCxGC system. The modulator “traps” effluent from the upstream column, and releases it in timed pulses to column two. The time between pulses, generally from two to six seconds, is known as the modulation time. Because the modulation time is much shorter than the elution time for a mixture, the modulator cuts each peak from the first column several times. A fast detector such as TOF-MS is required to resolve peak slices this narrow.

Literature from Restek lists thirteen different commercial or semi-commercial modulator designs; many academic “home brewed” modulator designs exist as well. The two main designs are mechanical and thermal. Mechanical modulators employ valves and holdup volumes within a modulation capillary to concentrate peaks and shunt them off to column two. Thermal modulators, which are much more prevalent today, operate by rapidly cooling the effluent from column one with liquid nitrogen or carbon dioxide. After concentrating the cut, the modulator vaporizes it and injects it into column two.

The model in use at Restek is the Leco (St. Joseph, MI) quad-jet dual-stage modulator. This device employs two cryogenic jets to freeze the cut and two thermal jets to re-vaporize it onto the second dimension.

The first thing readers who are unfamiliar with GCxGC printouts notice is that the typical peak height vs. time plot has been replaced by plots of firstdimension retention time vs. second-dimension retention time. Graphically, results are “contour” plots consisting of irregularly shaped roundish-oval areas or even streaks. Ideally, elution elements that overlap in the first dimension are fully resolved as two or more regions in the second dimension.

Because GCxGC is comprehensive and does not rely on heart cuts, each sampling of the first dimension and introduction onto the second dimension creates a new chromatogram. This factor alone generates hundreds or thousands of times as much data as a typical run in a single dimension. Software must also be capable of correlating the dimensional data to generate the contour plot.

“MetAlignID works on up to 128 cores, and speed improvements are approximately linear with respect to the number of cores,” comments Dr. Lommen, “but data quality is not.”

MetAlignID has only been tested on Leco GCxGC systems, but the package should work with other brands. The program is available for download at www.metalign.nl.

Why give such valuable software away? “We are a research institute,” Lommen explains. Our main focus is acquiring and funding new projects. If GC researchers like our work, we are happy to collaborate with them.”

GCxGC is a powerful technique, but in its current implementations it is by no means suited for a novice chromatographer. “GCxGC has saved me at times, when sample cleanup didn’t work well, by pulling the matrix away from my targets,” Restek’s Misselwitz admits. “But it entails a learning curve.”

How Chromatographers Are Avoiding the Latest Helium Shortage

How Chromatographers Are Avoiding the Latest Helium Shortage