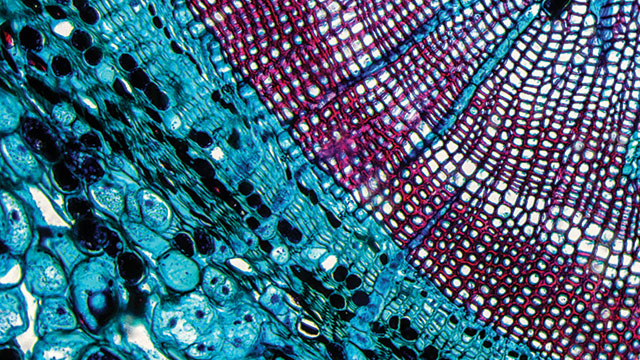 On October 8, 2014, the world of microscopy moved closer to a major transition when the Nobel Prize in Chemistry for 2014 was awarded “for the development of super-resolved fluorescence microscopy” to Eric Betzig of the Janelia Research Campus, Stefan W. Hell of the Max Planck Institute for Biophysical Chemistry, and William E. Moerner of Stanford University. Super-resolution microscopy provides resolution that surpasses the diffraction limit—about 200 nanometers—of ordinary light microscopy. This form of microscopy comes in an alphabet of types: NSOM (near-field scanning optical microscopy), PALM (photoactivated localization microscopy), SIM (structured illumination microscopy), STED (stimulated emission depletion), STORM (stochastic optical reconstruction microscopy), and many more. Each version provides variations in capabilities, which can depend on changes in sample preparation, and only experts could make these work, until now.

At Cornell University’s Biotechnology Resource Center, imaging director Rebecca Williams helps scientists use a range of super-resolution microscopes. For example, a Zeiss ELYRA provides PALM, super-resolution SIM (SRSIM), and STORM modes. “SR-SIM is pretty straightforward,” Williams says. “You can use any fluorophore that you want, and there’s not a lot of limitations on the sample.” She adds, “The sample can’t be too thick, but SR-SIM will mostly work with anything that you’d use with normal imaging.” Even while using traditional samples and preparation, SR-SIM increases resolution by a factor of two over standard light microscopy. “If you need to see just a little bit more,” Williams says, “SR-SIM can make a huge difference.” Perhaps even better, Williams and her colleagues can quickly teach scientists to use this technology themselves. “If you can run a confocal microscope, you can do SIM,” Williams says.

The super-resolution microscopes themselves allow this technology to move from expert to generalist. “The systems are just much more user-friendly than they used to be,” Williams says. “The vendors have made complex processes— like programming tiled series or following selected regions—intuitive with just the touch of a few buttons.”

Also, today’s super-resolution microscopes automate some features that produce excellent images. Focus feedback is one example. “If you take 20,000 images, and [they’re] slowly going to go out of focus,” Williams explains, “you are left with garbage.” Focus feedback maintains the same focal plane. “It’s a feature that works well now, and it didn’t used to,” Williams says.

A scientist can also purchase a system that provides confocal and super-resolution modes, such as the Olympus SD-OSR spinning disk super-resolution system. This microscope gives 120-nanometer lateral resolution. In talking about this microscope, Russell Ulbrich, product manager for high-end imaging systems at Olympus (Center Valley, PA), says, “People have explicitly stated their interest and then been surprised that they don’t need to change their protocol to access super-resolution.”

Despite the sophisticated imaging of the SD-OSR, it doesn’t take much to run it. When I ask Ulbrich how much training is required, he says, “I’d show you one slider to move from 1x to 3.2x.” He adds, “I’d also teach you about spherical aberration correction to optimize the signal-to-noise ratio of the system.”

Besides those small bits of training, Ulbrich says, “If you already have a fluorescent sample, you can put it on this microscope and see more.” In addition, you can see it at a pretty decent temporal rate—as much as three frames per second.

SIM provides a relatively painless transition from traditional to super-resolution microscopy. If you are a biologist who is familiar with confocal or widefield microscopy, Ferrand can train you to use the GE DeltaVision OMX SR in about three hours. This microscope provides localization microscopy and SIM. In addition, this microscope includes environmental control. “That means that you can use live cells and keep them healthy for hours and hours,” Ferrand explains.

Some of today’s SIM platforms are even designed for personal lab use. One example is Nikon’s N-SIM E, which performs 3-D SIM and comes with three wavelengths for exciting fluorophores. It’s about half the price of some of the first SIMs, and Ross says it has “a very streamlined user interface.” It even includes GPU processing filters that let a user adjust the image in real time.

In addition, samples from other forms of microscopy often work fine with SIM. “If you set up your imaging on a confocal or widefield deconvolution system,” Ferrand says, “then chances are you can use that sample for SIM.” In the end, she says, “SIM will improve your science, not make you reinvent it.”

Bringing super-resolution to biology’s masses represents one more advance in imaging for everyone. “The trend to get better images has always been there, and this is another step in the process,” says Ulbrich. Only a few years ago, most biologists probably didn’t expect to get such easy access to super-resolution so soon, but having it surely pushes ahead many research projects.

For additional resources on microscopy, including useful articles and a list of manufacturers, visit www.labmanager.com/microscopy