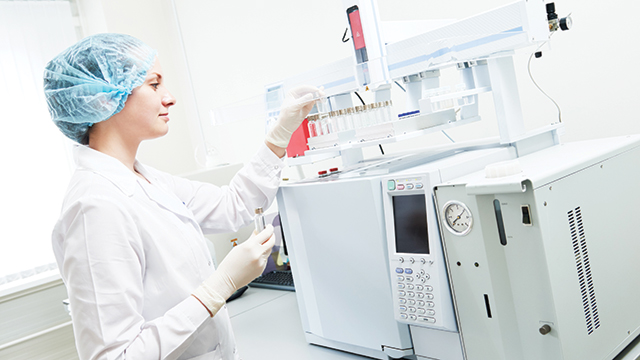 If one gas chromatography (GC) column doesn’t get the job done in a separation, maybe you should try two. That’s the basic premise behind GCxGC, which uses two columns in series. In brief, the first column’s output goes into a modulator that focuses and reinjects the sample into a second column. The results can be analyzed with various detectors, including mass spectrometry (MS). The two columns select for different components of the sample, and the results are graphed in two dimensions. That data can deliver more information about a sample than a single dimension of GC, and sometimes that’s what a scientist needs.

“The most common reason many labs are considering the addition of GCxGC to their portfolio of analytical techniques is the strength of the technique’s ability to effectively conquer complex mixture analysis,” says Joe Binkley, director of domestic separation science applications at LECO (Saint Joseph, MI). “When a GCxGC method is optimized, its separation capabilities are unrivaled by other chromatographic separation strategies.” He points out that GCxGC works well for many applications in various fields, including environmental, food safety, flavor/fragrance, life, and petrochemical sciences.

The penetration of GCxGC in labs, however, remains limited, because one dimension of GC provides enough separation in most applications, especially when using a sensitive detector like a mass spectrometer. In fact, coupling GCxGC with mass spectrometry pushes selectivity to a high level.

To get more scientists and engineers to try GCxGC, manufacturers must make it easier to use. As an example, LECO modified its column set to work more easily with various sample types—making it more likely that a scientist will get a good result on the first run. In addition, features in the company’s software let a user easily go from GC to GCxGC and back, all without changing any hardware in the platform.

Other vendors also design GCxGC technologies that simplify the process. “Agilent has been pioneering the use of flow-modulated GCxGC,” says Hedrick. “Flow-modulated GCxGC is less hardware intensive than traditional GCxGC with cold trapping.” He adds, “Existing GCs—especially Agilent 7890s—can be upgraded easily for GCxGC operation with a relatively inexpensive accessory kit.”

When deciding between flow and thermal modulation, speak with various vendors to determine which is best suited to your application.

Getting the best results from any GC depends on the right column for the application, and GCxGC is no different. As companies make even better columns, scientists can do more with GCxGC.

MilliporeSigma, for example, recently released the most polar GC columns that a scientist can buy, according to Creasey. “These GC columns, based on inert ionic liquid technology, offer the best orthogonality for GCxGC separations when paired with a nonpolar GC column, such as a 5% phenyl methylsiloxane column—for example, the SLB-5ms.” She adds, “The orthogonality achieved by ionic liquid columns allows for better selectivity, peak capacity, and resolution in GCxGC analysis.”

To get the most from GCxGC, it must be easy to analyze the results. At LECO, explains Binkley, “We have also combined the GCxGC technique with high-resolution time-of-flight mass spectrometry, which provides the most powerful tool available today for discovering what exists in a sample.”

Combining the separation power with comprehensive data analysis tools makes the technique easier to use. “Increasing analytical horsepower will provide customers more sample information from one injection, eliminating the need to reinject a sample to answer multiple questions,” Binkley says.

The complete GCxGC system determines the outcome of a specific application. So combining the best GC columns for a particular application with a sensitive detector, like a mass spectrometer, determines how accurate and sensitive the results will be. “For example, our customers are using ionic liquid GC columns in a GCxGC setup to detect compounds that were not possible to resolve using conventional onedimensional GC, such as isomeric alcohols in perfumes, terpenes in essential oils, and polycyclic aromatic hydrocarbons in gasoline,” Creasey explains.

To really see how GCxGC can apply to your work, seek out an expert who has used this technology in different ways. For example, Shaelah Reidy, senior chemist at General Motors (Warren, MI), has used GCxGC in a variety of ways over the years.

Today, says Reidy, “A lot of what I do is identifying differences between unknown samples, so I rely heavily on the structure of the resulting data and using that structure to identify unknown compounds.” In that work, the increased separation provided by GCxGC improves the odds of finding something that is present at a low concentration in a sample.

Based on her broad experience with GCxGC, Reidy suggests that anyone looking into using this technology seek out advice. “I would start by talking to people who use it,” she says. “My experience has been they are best to tell you what works and what doesn’t work.” She adds, “If you don’t know anyone who uses it, contact some of the instrument manufacturers or attend one of the analytical chemistry conferences.”

With some expert insight and the right platforms and columns, scientists will find an increasing number of ways to use this version of GC. Although two isn’t always better than one, it can be in some cases when it comes to GC

For additional resources on gas chromatography, including useful articles and a list of manufacturers, visit www.labmanager.com/gc