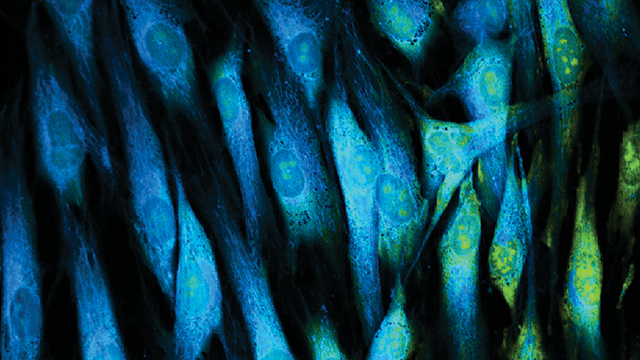 Live cell imaging is the study of living cells using microscopy-based imaging systems. Imaging formerly focused on dead, fixed cells (e.g., pathology) or, when used for living cells, was limited to assessing morphology, viability, and a few other visually apparent effects of environmental or chemical stimuli. But by using fluorescent labels for specific cellular processes or cellular interactions, high-content screening is possible for multiple parameters within either a collection of cells or a single cell. Thus, the elusive “biological relevance,” which is the basis of live cell analysis in basic science, toxicology, and especially pharmaceutical development.

The new report introduced by RNCOS Business Consulting, Live Cell Imaging Market Outlook 2022, estimates that live cell imaging products and services will be valued at $7 billion by 2022. Growth will be driven by advances in instrumentation plus the everexpanding alphabet soup of fluorescent tags and labeling kits.

“Methods and targets for live cell imaging continue to expand, fueling a constant growth of experiments researchers would like to perform but which have proved too labor-intensive or nonscalable,” says Benjamin Alderete, imaging specialist at MilliporeSigma. “Consequently, investigators have to make hard limiting choices based on the available time for executing a cell imaging project.” Equipment vendors have responded by incorporating more automation and flexible programming into imaging systems. “CellASIC® ONIX2 represents one such response, which turns microscopes already in use into more efficient imaging platforms.”

Within the current paradigm, cell culture and live cell imaging are conducted separately, as static or standalone processes. A good first approximation perhaps, but hardly, Alderete says, a recapitulation of what occurs in living systems where cells constantly undergo perfusion.

“By virtue of microfluidic design, we can treat cells with a series of solutions through microfluidic channels and can imprint multiple experiments onto a single 96-well plate format for reproducible, highly parallel investigations,” he adds. “It’s now possible to automate what used to require an entire laboratory workflow within a pneumatically controlled system.”

Culture vessels are critical for maintaining cells in the desired physiologic state, says Briana Jones, product manager for Cell Culture and Diagnostics at Greiner. “Keeping living cells within the field of vision and in the focal plane can be problematic within the often long time frames for imaging experiments.”

Greiner’s products for attachment-dependent cells involve a “proprietary treatment” that Jones insists is “not a coating.”

Because living cells are delicate, mechanical fixing methods, even passive ones, may be inappropriate for certain analyses.

A collaborative effort between physicists at the University of Bielefeld (Germany) and Tromsø (Norway), and chemists at the GoetheUniversity, Frankfurt, has resulted in a cell imaging technique with the finest combination of control and resolution yet available.

The project, headed by Prof. Thomas Huser (Bielefeld), for the first time combines optical tweezers with an established imaging platform.

Optical tweezers use a focused laser beam to immobilize and manipulate microscopic objects, including live cells. The effect is based on the balancing of two forces: the laser photons striking the target and a gradient electrical force existing within the beam.

“What’s special about our tweezers is we use holographic optics,” Huser explains. “That means the focus pattern is generated by a spatial light modulator, which is the technical term for a miniature liquid crystal display like you’d find on a computer screen. This allows us to change the pattern and actively establish traps in different positions at will and to move the trap positions around.”

This trapping and manipulation screen allows immobilization of several cells either together or separated. According to Huser, this is relatively established technology.

“Combining holographic tweezers with super-resolution optical microscopy allows resolution of the inner structure of nucleoids within bacterial cells,” Huser adds. Nucleoids are compartments within prokaryotes containing most of the cell’s genetic material.

“STORM/dSTORM require the lengthy acquisition of many images revealing single ‘blinking’ molecules.” Think of cartoons in slow motion. “Thus, the residual motion of a cell that’s held by optical tweezers will still result in rather blurry images. We minimized the residual motion and compensate for it computationally, which enabled us to resolve DNA nucleoids down to 100 nm.”

Huser says there are no significant limitations to the types of cells on which his technique will work. But despite the fact that optical tweezers do not physically tether cells, dSTORM, in its current form, is too slow for most living cells. “We’re currently working on another, separate approach that will enable us to tremendously speed up the imaging process,” and thereby expand optical tweezer technology to living cells.

For additional resources on live cell imaging, including useful articles and a list of manufacturers, visit www.labmanager.com/microscopy