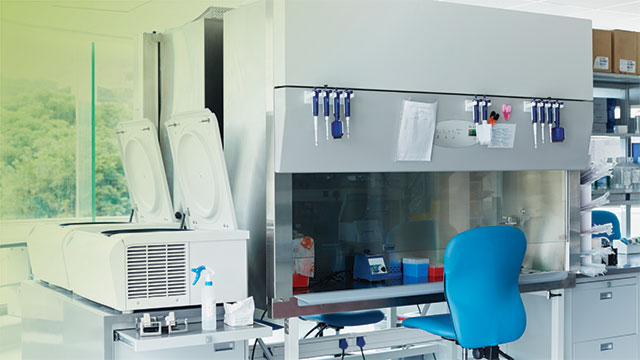 The fume hood is an important safety staple in chemistry classrooms and research labs. Getting the most out of a fume hood begins with selecting the right one for your application. That means knowing precisely what type of work will be performed in the fume hood and making the choice between constant air volume and variable air volume, choosing between a ducted and a ductless fume hood, and selecting the appropriate material of construction.

The interior liner of a fume hood must be compatible with the chemicals it will be exposed to. For example, Beth Mankameyer at Labconco (Kansas City, MO) says that those performing acid digestions will likely require a polyvinyl chloride liner on their fume hoods or another material that is similarly corrosion-resistant. Work with radioisotopes or perchloric acid typically requires a stainless-steel liner. For those working with noncorrosive or moderately corrosive chemicals, epoxy-coated steel is normally sufficient. The most common liners for general chemistry hoods are made of fiberglass, which Mankameyer notes has good overall chemical resistance.

Labs should consider whether a ducted or a ductless fume hood is right for them. Traditional ducted fume hoods are required in certain situations: to accommodate heavy volumes of acids, such as an acid digestion process, when dealing with noble gases, or in cases in which an unknown quantity of evaporation is occurring in the hood, according to Jesse Coiro from Erlab (Rowley, MA). “Though filtered fume hoods are a viable solution for 90 percent of the chemistry performed in today’s labs, there is a still a place for ducted fume hoods at this time,” he says.

On the other hand, users who are performing repetitive processes, such as those that arise in quality control, and know what volume of chemicals they will be using and at what temperature, would likely benefit from a ductless fume hood, says Mankameyer. Still, prior to selecting a fume hood, users should provide the manufacturer with a list of chemicals they plan to use in order to help figure out whether ducted or ductless is the right solution.

Even after a lab has decided on a ductless fume hood, there is still the question of what type of filtration will best serve their safety requirements. “Some customers will require HEPA filtration along with molecular filtration,” says Coiro. “For example, if it is a forensic lab, they will be handling opioids and [their] analogs as well as the analytical chemistry that involves hazardous chemicals to determine potency, etc. In this case, a HEPA and a molecular filter would be integrated into the filtration configuration for proper safety.” He adds that manufacturers must be able to prove they adhere to the AFNOR NFX 15-211 filtration safety standard, which includes a guarantee that there never be exposure greater than one percent of the TLV (threshold limit value).

Constant air volume (CAV) fume hoods exhaust the same amount of air regardless of the sash position, whereas variable air volume (VAV) systems vary the amount of air exhausted from the fume hood in response to the sash opening. For specialty applications like boiling acids, Mankameyer says CAV is the best choice because lowering the air volume could allow heat to build up inside of the hood. “With general chemistry,” she adds, “you could use either or [CAV or VAV fume hoods] depending on the facility’s requirements.”

Coiro also notes that VAV is more beneficial for a ducted fume hood than a ductless fume hood. “The reason why you want variable air on a ducted hood is because you want to reduce the airflow rate that’s getting evacuated from the building,” he says. “With a filtered fume hood, you don’t necessarily need a variable speed hood, simply because you’re keeping all the conditioned air within the facility at all times.”

In addition to these considerations, individuals selecting a fume hood for their labs should also research the capital, installation, and operational costs involved; warranties; and service and support offered by the manufacturer to ensure that they find the ideal system to fit their budgets and serve their safety needs.