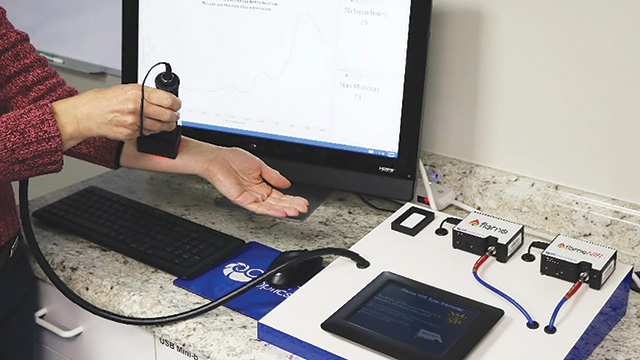 As high-performance liquid chromatography and mass spectrometry have become more accessible, ultraviolet-visible (UV-Vis) spectrometry has fallen out of favor for detailed chemical analysis. Sensitivity and resolving power are the main reasons.

In their native state, molecules that do not possess a chromophore that absorbs within the appropriate wavelength range will be invisible to UV-Vis. Proteins, DNA, and RNA have such chromophores (as do some viruses and bacteria), but unbound sugars and lipids do not. In practice, to achieve the sensitivity demanded by modern science, even genes and proteins must undergo derivatization.

A perusal of the literature shows that when leading-edge biochemistry employs UV-Vis spectrometry, it usually does so as the detector stage of a separation (usually LC), or built into a microplate reader. Thus the “spectroscopy” occurs not as the main event within a cuvette, but at the very point of scientific interest.

Within these settings, the detectors in plate readers are capable of performing point measurements, time courses, kinetics, and other experiments in reproducible formats. UV-Vis is much more limited when acting as an LC detector, but the resolving power of chromatography opens doors to other types of analyses, particularly involving the resolution of species with very similar absorptions.

Through the plate, brightly

DNA quantitation is critical for many samples containing low quantities of genetic material. Forensics and next-generation sequencing (NGS) come to mind. In NGS, the investigation of mutations, for example, requires knowledge of precise DNA levels.

Fluorescent methods have proved to be accurate and sensitive, as a group at BMG Labtech showed in a recent application note. As the indicator dye, the scientists used the AccuBlue™ NextGen dsDNA (double-stranded DNA) detection kit from Biotium for its sensitivity, and BMG’s CLARIOstar® microplate reader.

AccuBlue demonstrated perfect linearity in the dsDNA range of 1 to 5,000 pg (correlation of 0.99983) in 96-well plates. The assay performed even better at the six lowest concentrations, with a linearity of 0.99998.

“The optical system of the CLARIOstar was vital to obtaining these results,” notes Carl Peters, PhD, applications scientist at BMG Labtech. “Wavelength selection through a linear variable filter system enables filterlike performance while being selective for any wavelength and bandpass up to 100 nm.” The wavelength selection is paired with a linear variable dichroic that automatically uses the best dichroic for optimal transmission of excitation light to the sample and subsequently emission light to the detector.

Related Survey Results: Are You in the Market for a UV-Vis Spectrophotometer?

AccuBlue detects only dsDNA, so contamination from ssDNA, RNA, and proteins will not affect accurate quantitation, regardless of the source. Furthermore, it destroys the sample, so unlike reagentless UV detection, it cannot be used for any subsequent purpose. But the sample size is small, so losses are minimal, according to Peters.

“We routinely see similar correlation coefficients for any assay type that uses a standard curve that conforms to a linear fit,” he says.

Detecting biological molecules in vivo is arguably one of the great challenges of biomedical science. Clinical and basic research are limited to sampling, which in some cases is difficult, in others impossible, and in all cases disturbs the natural environment in which the molecule exists.

A group at Ocean Optics (Largo, FL) has recently demonstrated a method based on visible and nearinfrared reflectance spectroscopy to determine the “melanin index” and “moisture index” of skin by measuring levels of melanin and water, respectively, at strategic locations in the skin. They used a dualspectrometer design and compact diffuse reflection probe with built-in light source to measure diffuse reflectance from tissue across the visible and near-infrared regions.

The first step was to establish parameters for melanin concentrations. Although melanin is not a distinct compound with a perfectly resolvable spectrum, it may nevertheless be quantified in skin spectroscopically through chemometric analysis. The two major potential interferences, highlyabsorbing hemoglobin and deoxyhemoglobin, absorbed strongly below 450 nm and showed characteristic peaks between 520 and about 580 nm.

Investigators avoided the strongly absorbing regions for the hemoglobins and settled on four wavelengths for quantifying melanin: 400, 450, 490, and 700 nm. Combining absorbances at these wavelengths provided a simplified method for melanin index, which correlated closely with predicted values based on skin color. Moisture index was more straightforwardly generated by its strong absorbance peak at 1465 nm (in the NIR), referenced against a dip at 1300 nm.

Yvette Mattley, PhD, a principal applications scientist for Ocean Optics, describes the study as a proof of concept. “Our goal was to inspire others with an example of the types of analysis that can be done with diffuse reflectance spectroscopy. In a real-world setting, a robust model for outputting accurate tissue properties would require measuring reflectance from the skin of hundreds of people, at multiple locations on the body, to provide data for skin with a wide range of tissue properties.”

Extracting significance from measurements like these would require comparing reflectance spectra from collected samples against reference values. “With the wide range of tissue compositions possible, the work to develop robust versions of these indices would be very extensive, potentially requiring months of work, depending on the resources available. Such a model should then be general enough to be used for measurements on many individuals without additional analyses.”

Light interacting with tissue, blood, and other biological materials reveals an abundance of detailed information. “And it does it all noninvasively, in real time, and often, at lower costs per measurement than other methods,” Mattley says.

Actual spectroscopy—the detection or characterization of specific biomolecules vs. sensing of physical phenomena—is more problematic, but by no means impossible.

For the exploratory measurements described here, Ocean Optics used a combination of two spectrometers covering the visible and NIR regions from 400 to 1600 nm (FLAME-S-VISNIR and FLAME-NIR). This maximized the data collected and provided a wide wavelength range to analyze for tissue characterization. Once key wavelength regions are identified, the measurement system could be configured to measure spectral data in the key regions of interest. Diffuse reflection was collected from the skin using a probe with a standoff accessory (TC-DR-PROBE) to ensure consistent sampling geometry throughout the measurements.

“Setting up the equipment for these measurements is straightforward,” Mattley explains. The user simply connects the spectrometers to the reflection probe using a bifurcated optical fiber. The measurements themselves are also relatively easy, but require a very consistent sampling geometry between the probe and tissue under analysis. The angle and distance between the probe and skin must be maintained from the time the reference is measured throughout the sample measurements to ensure accurate spectral data.

For additional resources on UV-VIS including useful articles and a list of manufacturers, visit www.labmanager.com/uv-vis