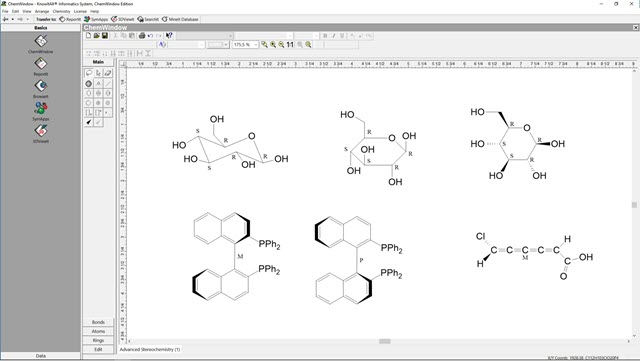 The KnowItAll 2018 software now offers advanced stereochemical recognition, which is able to interpret structures (drawn or imported) using traditional stereochemical drawing conventions that are not supported in other available solutions. KnowItAll's ability to understand and preserve the stereochemical intent of each structure is critical to building scientific databases containing structures and relating those records to one another.

This release of KnowItAll also offers an additional 44,000 reference spectra in its KnowItAll Spectral Library of over 2.3 million spectra. From chair and boat representations and Fischer and Haworth projections to pseudo-3D perspective drawings, chemists have drawn 2D versions of 3D molecules for over a century, but computer software has been less successful in creating such drawings. Software-based chemical structure “standardization” often removes or misinterprets implicit stereochemistry in the original structure. The KnowItAll software presents a more accurate approach with intelligent software-based interpretation that interprets the original 3-D intent of 2-D drawings, as a chemist would.

“The ability to relate records to one another is critical in large chemical databases and this is most often done through chemical structures,” said Gregory M. Banik, Ph.D., Bio-Rad general manager, Informatics. “Whenever software interprets the stereochemistry in the original structure incorrectly, records cannot be related to one another and the connection is lost. However, the way KnowItAll is able to interpret implicit information in chemical structures is a game-changer for those working with large datasets of chemicals, including those in chemical and pharmaceutical information,” he said.

The new advanced stereochemistry feature is included in all editions of the KnowItAll software including the ChemWindow®, Vibrational Spectroscopy, and Analytical editions. It is compliant with the most recent IUPAC structure representation conventions as defined by the IUPAC Nomenclature of Organic Chemistry (Blue Book), 2013 Edition.

Bio-Rad is offering a KnowItAll Stereochemical Toolkit (TK) to developers who wish to incorporate KnowItAll’s advanced stereochemistry technology into their platform. Learn more at www.knowitall.com/stereochem.