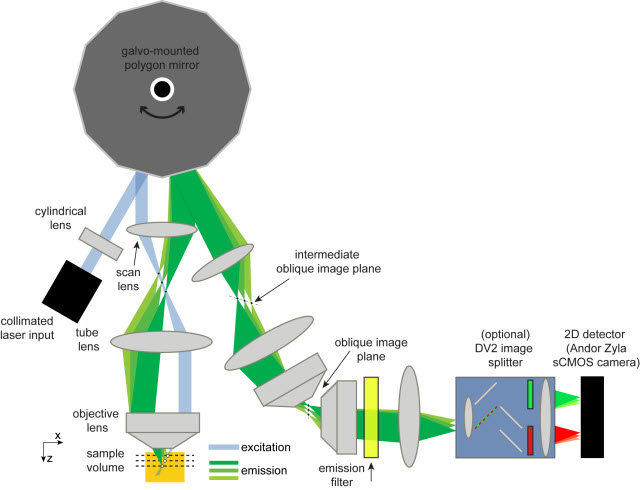 Belfast, September 12, 2017 - Advances in confocal, two-photon and light-sheet microscopy have rapidly advanced our understanding of cellular and subcellular structures and processes. However, live cell and whole animal imaging could be on the verge of even more breakthroughs following the publication in Nature Photonics of work by a team of Columbia University scientists using the fast and ultra-sensitive Andor Zyla sCMOS camera.

Led by Elizabeth Hillman, associate professor of biomedical engineering at Columbia University Medical Center (CUMC), and her graduate student, Matthew Bouchard, the team has successfully developed the SCAPE (Swept Confocally Aligned Planar Excitation) 3D microscope, which eliminates the need to mount samples or other special preparation and is capable of imaging freely moving living samples in real-time at speeds 10 to 100 times faster than current laser-scanning microscopes.

According to Hillman, “Unlike conventional light-sheet microscopes that utilize a pair of cumbersomely-positioned objective lenses, SCAPE uses a single-objective lens with a light sheet sweeping across the field of view to capture 3D images without moving the sample or the objective. This combination makes SCAPE extremely fast, versatile, and simple to use, as well as surprisingly inexpensive, and could be transformative in bringing the ability to capture high-speed 3D cellular activity to a wide range of living samples. With the Andor Zyla sCMOS camera set to read out 2,560 x 80 micron images at 2,404 frames per second we have demonstrated the ability of SCAPE to image living organisms, including Drosophila melanogaster larvae and zebrafish at up to 48 volumes per second. 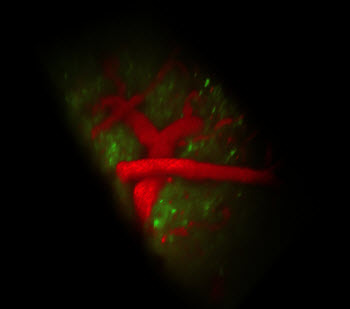 SCAPE imaging of the living brain, with green GCaMP labelling apical dendrites of layer 5 neurons, and red showing Texas red dextran in the vasculature. Data was acquired at 10 volumes per second.Image Credits: Elizabeth Hillman and Clay Lacefield"SCAPE has also captured neurons flashing in a living mouse brain and, unlike other 3D imaging systems, doesn't need to constantly readjust either the imaging objective lens or the sample, allowing the subject to move freely throughout the imaging process. The ability to perform real-time 3D imaging at cellular resolution in behaving organisms is a new frontier for biomedical and neuroscience research," said Professor Hillman. "With SCAPE, we can now image complex, living things, such as neurons firing in the rodent brain, crawling fruit fly larvae, and single cells in the zebrafish heart while the heart is actually beating spontaneously—this has not been possible until now."

Many further applications for SCAPE are envisaged by the CUMC researchers, including capturing images of cellular replication, function, and motion in living tissue, and imaging 3D cell cultures, as well as capturing 3D images of dynamics in microfluidic and flow-cell cytometry structures. These areas may be particularly enhanced by SCAPE as these are applications where molecular biology imaging methods have fallen behind the latest tools and techniques.

Unlike previous CMOS or CCD technologies, the Andor Zyla models set radical new benchmarks in their unique ability to deliver simultaneously highest specifications in sensitivity, resolution, speed, dynamic range, and field-of-view. The camera is based around a large 4.2 or 5.5 megapixel sensor with 6.5 micron pixels and is capable of 100 fps sustained (via Camera Link; 40 fps via USB3), making it ideal for applications in cell microscopy, astronomy, digital pathology, and high content screening. The Rolling and Global shutter exposure modes further enhances application flexibility. Global shutter in particular offers an ideal means to simply and efficiently synchronize the Zyla with other ‘moving’ devices, such as stages or light switching sources, and eliminating the possibility of spatial distortion when imaging fast-moving objects.

Andor is a global leader in the pioneering and manufacturing of high performance scientific imaging cameras, spectroscopy solutions and microscopy systems for research and OEM markets. Andor has been innovating the photonics industry for over 20 years and continues to set the standard for high performance light measuring solutions, enabling its customers to break new ground by performing light measurements previously considered impossible. Andor’s digital cameras, are allowing scientists around the world to measure light down to a single photon and capture events occurring within 1 billionth of a second.

Andor now has over 400 staff across 16 offices worldwide, distributing products to over 10,000 customers in 55 countries. Andor’s products are used in a wide range of applications including medical research to further the understanding of heart disease, cancer and neuronal diseases such as Alzheimer’s and Parkinson’s disease. Andor also has applications for forensic science and astronomy. Through continuous dialogue with customers and strong teamwork, Andor continues to innovate ground-breaking products that improve the world in which we live.

Oxford Instruments designs, supplies and supports high-technology tools and systems with a focus on research and industrial applications. Innovation has been the driving force behind Oxford Instruments' growth and success for over 50 years, and its strategy is to effect the successful commercialisation of these ideas by bringing them to market in a timely and customer-focused fashion.

The first technology business to be spun out from Oxford University, Oxford Instruments is now a global company with over 2000 staff worldwide. Its objective is to be the leading provider of new generation tools and systems for the research and industrial sectors with a focus on nanotechnology. Its key market sectors include nano-fabrication and nano-materials. The company’s strategy is to expand the business into the life sciences arena, where nanotechnology and biotechnology intersect.

Oxford Instruments aims to pursue responsible development and deeper understanding of our world through science and technology. Its products, expertise, and ideas address global issues such as energy, environment, security, and health.