BEDFORDSHIRE, UK — Mologic Ltd, a leading developer of lateral flow and rapid diagnostic technologies, today announced that it has started a major clinical trial to validate the Company’s urine-based multi-biomarker self-test, Headstart®, for the early detection of exacerbations in patients living with moderate to severe chronic obstructive pulmonary disease (COPD). Supported by a wide consortium of clinical experts, the observational trial known as COPE-WEL has recently started recruitment of 263 patients across 10 centers in the UK. 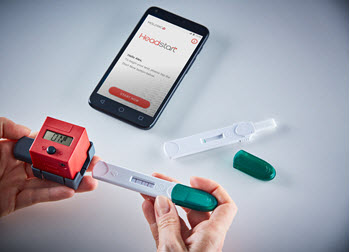 Mologic’s urine-based multi-biomarker self-test, Headstart®.Credit: MologicHeadstart is an in vitro diagnostic self-test that detects five biomarkers indicative of infection and inflammation in the urine of COPD patients. The COPE-WEL trial expands on a previous proof-of-concept study that successfully demonstrated the use of Headstart as a multi-biomarker diagnostic self-test with the ability to predict the early onset of a COPD exacerbation up to six days prior to symptom onset, or up to nine days prior for clinical diagnosis by a healthcare provider.

The COPE-WEL trial will clinically validate the machine learning algorithm and five selected biomarkers integrated into the Headstart system, with patients conducting daily urine testing to establish a baseline biomarker profile and monitor these biomarkers for changes over a period of six months. The Headstart system is designed for home monitoring and integrates a simple, easy to use diagnostic with a reader and  mobile phone app to capture patient-specific health data, which are digitally transferred to care providers for monitoring and provide patients early warning of an exacerbation event, prior to clinical signs. As part of Mologic’s flagship respiratory program, validation of the Headstart system will provide patients with a transformative approach to tailoring remote disease management and early treatment.

COPD is a progressive life-threatening lung disease that causes breathlessness and predisposes patients to frequent attacks resulting in serious illness, hospitalization and even death. Symptoms often don’t appear until significant lung damage has already occurred, usually worsening over time. If exacerbations can be identified before the symptoms appear, they can be dealt with earlier, limiting their effect and potential consequences. Globally it is estimated that 251 million people are living with the condition and over three million associated deaths each year which are projected to increase by more than 30 percent in the next 10 years (WHO Fact Sheet, Nov 2017; WHO, 2019).

Clinical partners in the trial include professor Chris Brightling, National Institute for Health Research (NIHR) senior research fellow and clinical professor in respiratory medicine at the University of Leicester, who is leading the clinical study at the NIHR Leicester Biomedical Research Centre, based at Glenfield Hospital, with professor Keir Lewis, chair in respiratory medicine at Swansea University and R&D director, Hywel Dda, University Health Board, Wales.

Professor Paul Davis, chief scientific officer and co-founder, Mologic, said: “We are enthusiastic to bring this program to its validation study as it represents over eight years of biomarker research and product development. Upon its successful completion, we look forward to commercial partnership that can realize the full potential of this truly transformative approach to community-based management of patients living with COPD.”

“This simple urine test will help COPD patients distinguish the beginning of a severe lung attack from, simply, a variation in their background symptoms which will get better on their own," Brightling commented. "Identifying COPD exacerbations and intervening early with an individualized or precision medicine strategy offers patients and clinicians a very promising approach to disease management, and could be transformative for the care of people with COPD.”

“COPD is now the third most common cause of death worldwide," Lewis added. "Sufferers experience daily breathlessness and recurrent lung attacks often needing admission to hospital. Headstart is based on a urine test and applies state-of-the-art biomarker measurement with App technology to place a simple kit in the patient’s home. This puts the patient at the heart of their care and we hope early warning of worsening COPD could stop attacks before they take hold. I am delighted to be continuing work with Mologic on this ground-breaking project as I believe Headstart offers a fabulous opportunity to impact this devastating illness.”

The development of Headstart is co-funded by the UK’s innovation agency, Innovate UK through its SBRI Healthcare initiative.

To find out more about Mologic visit: https://mologic.co.uk/