HORIBA Scientific, global leader in fluorescence instrumentation and solutions, is proud to introduce a revolutionary new fluorescence/UV-Vis spectrometer that has been designed to address a new market for HORIBA, the so called mid-market, with a lower price point analytical fluorometer. 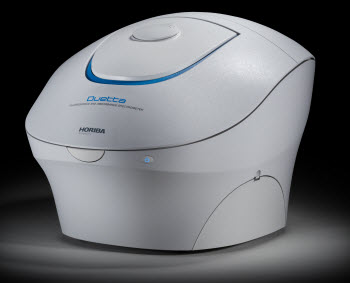 Its ultrafast CCD acquires an entire fluorescence spectrum in the blink of an eye. With an effective scan speed of 510,000 nm/min, Duetta can acquire an entire three dimensional Excitation Emission Matrix (EEM) in less than a second, significantly faster than a scanning, PMT based, benchtop spectrofluorometer.

With a standard fluorescence emission wavelength range of 250 to 1100 nm, Duetta also offers extended NIR fluorescence detection well beyond that of conventional PMT based fluorometers.

Duetta features EzSpec, a new software interface from HORIBA Scientific which caters to the millennial generation with touchscreen utility, simplified use and a selection of Apps for routine analysis.

For more information on Duetta, please go to: www.horiba.com/duetta