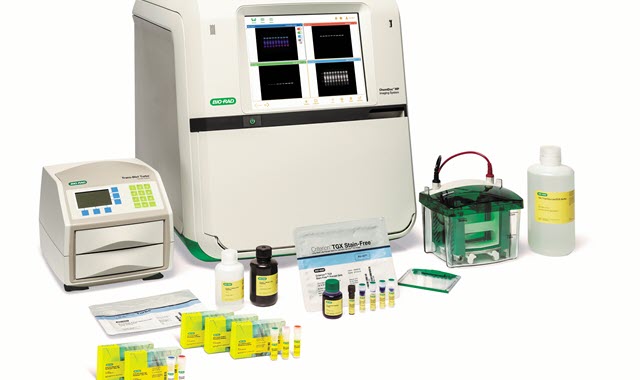 Using traditional chemiluminescent methods to detect and quantify multiple proteins simultaneously can be challenging. Scientists often resort to cutting or reprobing blots, which introduces variability and results in protein loss, thereby rendering the blot irreproducible and unsuitable for quantitation. An alternate method involves attempting to sequentially probe a single blot with multiple fluorescent antibodies to distinguish the signals from each one; however, these protocols are cumbersome to optimize and execute.

To address these workflow challenges, Bio-Rad created the StarBright Blue line of secondary antibodies that enable highly sensitive fluorescent detection, short exposure times, and easy multiplexing for western blotting. These plug-and-play antibodies allow simultaneous detection of up to three proteins (two targets of interest and one housekeeping protein) on the same blot when used with the hFAB Rhodamine Housekeeping Protein Fluorescent Primary Antibodies. The antibodies work seamlessly on nitrocellulose or low-fluorescence PVDF membranes and all other aspects of the standard western blotting workflow remain unchanged.

The StarBright Blue 520 Fluorescent Secondary Antibodies can detect low-abundance protein targets in exposure times that are two to four times shorter than those of traditional fluorescent antibodies.

For researchers new to western blot imaging, Bio-Rad continues to lead the industry in customer support and online resources, including Western Blot Doctor Troubleshooting Guide and a library of videos.