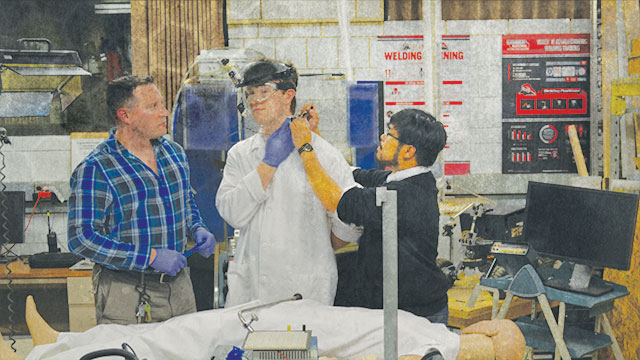 Richard Stone supervises as Tom Schnieders makes modifications to an EMG electrode connected to an eye tracker on Erik Danford-Klein.

The work done in Iowa State University’s ATHENA Lab is all about helping people work better, but perhaps because of this main goal, it doesn’t feel like work.

“Oftentimes, if work is very well designed or techniques and tools are very well designed, you can get a better outcome for everyone involved,” says Dr. Richard Stone, director and cofounder of the lab, which was established in 2015. “Our goal is to truly augment the human experience and the human capability.”

That goal means looking at aspects—including both mental and physical absolute load on the body—and redesigning work so that it can be done more efficiently and effectively with less stress and strain. Stone, his fellow cofounder Thomas Schnieders, and around 20 grad students, undergraduates, and volunteers, are always working on projects in the lab to improve the working lives of those in a number of industries, including medicine, military, law enforcement, agriculture, and the service industry.

ATHENA, which stands for Augmentation and Training of Humans with Engineering in North America, is the only lab recognized by the Augmented Human International Conferences Series as a human augmentation lab in North America. It grew out of Stone’s previous lab, which was started in 2008, and it is always changing.

As of April 2016, the lab was set up in one section to mimic a medical setting for a project focused on suturing, while in another section researchers were exploring the biomechanics of kickboxing using a system set to film kicks in slow motion. Schnieders also had a project underway focused on upper body exoskeletons. And those are only the main projects. There are so many going on at any one time that the lab is booked from 8 a.m. to 8 p.m., meaning that crews need to go in at 8 p.m. to do builds or set up for the next project, working as late as needed to finish.

“The key challenge for us is scheduling. We have many enthusiastic members of the lab who are very driven and want to do so many projects, and oftentimes, these aren’t projects they have to do for school credit,” Stone explains, adding that often confidentiality agreements mean projects can’t run at the same time, in order to protect the privacy of those participating.

Schnieders handles those challenges by looking after the schedule and just staying organized, but the team also makes very efficient use of its 725 square feet of space, using vertical space to fit as much equipment in as possible. That includes everything from robots at the top to high-speed cameras, EMG and EKG systems, CO2 max systems, mannequins, and skeletons at the bottom.

And the culture of the lab helps as well.

“When it comes to doing a lab rebuild, there are often scenarios in which only two or three people are actually doing an active project, but you will see at least half of our staff—if not more—show up to do the teardown and rebuild every time,” Stone says.

While the lab is always full, many projects actually take place in the field. Stone and Schnieders both agree that it is important that all lab members get involved at the worker level to gain a better idea of how to improve processes, and they set the tone by doing so themselves. Stone, for example, is a qualified welder, reserve deputy, and recovery diver.

That means the lab is a great place for learning, whether it’s from other jobs on-site or from fellow lab members who have a range of different skills and knowledge. While most, as you’d expect, are engineers, the lab also has researchers from other disciplines such as business.

“We are constantly learning ourselves, augmenting our own capabilities, because there’s so much to be learned out there,” Stone says. “We’re good at what we do, but we get better when we work with others.”

And lab members simply love working in the lab, in spite of the late and odd hours.

“I’ve been in there a number of times when five or six hours have passed and none of the researchers will have realized how much time has gone by,” Schnieders says. “We’re thoroughly enjoying what we’re doing at any given moment.”

For the future, the team is looking to expand Schnieders’ exoskeleton project to focus on the whole body, and they’re always looking to grow their humanitarian work. Stone’s personal focus is on preventing cruelty to animals, while Schnieders’ passion is promoting STEM learning. Another goal is just to bring in more people from an even greater variety of disciplines.

“One thing that I want to foster is even more diversity in the projects,” Stone says.

And, of course, they’ll continue to help humans reach their full potential.

“You’ll find that people will abandon skills that they may have been great at because they didn’t reach success fairly early on and that’s a very common tragedy, because you never know what they could have done,” Stone explains. “What we try to do is reveal those capabilities.” 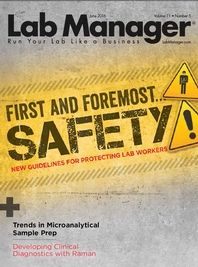