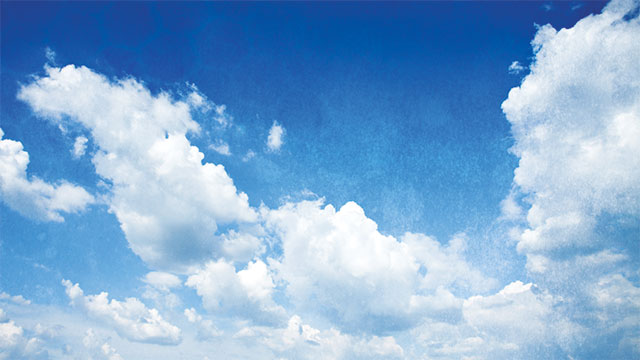 While you might think clouds weigh next to nothing, the average cumulus cloud with a volume of 1 cubic kilometer located 2 kilometers above Earth weighs around 551 tons, according to the US Geological Survey. And though they weigh far less than that average cloud, cloud chambers—the main instrument used to study cloud formation in the laboratory—are also pretty hefty.

For example, Michigan Technological University’s (MTU) cloud chamber, including its associated equipment, weighs in at 15 tons. However, it’s how the unit creates clouds that makes it unique among its fellow chambers. Most chambers, explains Michigan Tech physics professor Will Cantrell, are expansion chambers. “You close [the chamber] up, you start pumping air out of the chamber really quickly, and that causes the air to cool quickly enough for the cloud to form,” Cantrell says. “The drawback to that is the cloud lasts only as long as you pump, so if you go from atmospheric pressure to half an atmosphere of pressure, you just can’t pump very much longer, and so the cloud dissipates.”

Michigan Tech’s chamber, located on the ground floor of MTU’s Dow Environmental Sciences and Engineering Building in Houghton, can also make clouds in this manner, but usually creates them through mixing. The air next to the chamber’s floor is hot, wet, and positively buoyant, while what’s next to the ceiling is cold, wet, and negatively buoyant, explains Cantrell, who is also director of MTU’s Earth, Planetary, and Space Sciences Institute. When those two parcels of air meet and mix together, they create the conditions for cloud formation, similar to how hot breath creates clouds when it meets cold outdoor air in the winter.

“The nice thing about that is it just keeps doing that as long as you keep that temperature difference,” Cantrell says. “We’ve had a cloud in the chamber for basically a day, which I’m pretty sure is a world record, but I’m also pretty sure Guinness doesn’t keep track of such things.” Funded by the National Science Foundation and built by Russells Technical Products (Holland, MI), the chamber is nicknamed the Pi Chamber because it was delivered to MTU on Pi Day—March 14, 2014—and its internal volume with the cylindrical insert in place is 3.14 cubic meters. While the cloud created in that space weighs only a few grams, those few grams of water have provided many fascinating insights into cloud formation.

Recent research in the chamber, published in November 2016 and involving Cantrell and his colleague Raymond Shaw, centered on the way turbulence influences the growth of cloud droplets and how that changes in a big way between clean and polluted clouds. Experiments in the chamber showed there are two regimes: a polluted cloud regime in which the droplets are almost all the same size and a clean cloud regime in which the droplets experience a wide variety of growth conditions and therefore have very different sizes—small droplets that happened to not find a high relative humidity or had lots of competition when they did and then some lucky, big droplets that found their own patches of high humidity, Shaw says.

“The work that was described in that article was for liquid water clouds,” Cantrell adds. “All of this was at temperatures above zero. We’re also quite interested in ice phase processes in the cloud, and that adds another layer of complexity.”

He says figuring out how many ice crystals there are in cloud droplets is much more difficult than figuring out how many cloud droplets there are within the chamber. Currently, the researchers are improving their measurement of ice crystal concentration within the chamber and starting some experiments to explore ice phase processes further, aiming to have those completed by summer’s end. Further work depends on what their data tells them. “If we find surprises, it could be another four or five years of follow-on experiments and explorations of different things that we find in the data,” Cantrell says. “All of this is of course contingent on funding.”

Funding, in fact, is one of the key challenges they face with the chamber, he adds.

“One of the challenges that Raymond and I have talked about from the beginning is to not only get funding but [to get] continuous funding, because we want to make sure that we have funding to pay our research engineer,” Cantrell says, adding that the engineer is the only dedicated staff member for the chamber.

However, the uniqueness of the chamber helps. “I think we’re in a pretty good position because there’s no other chamber like this in the world,” Cantrell explains. “We can do things that other people can’t, so that gives us some substantial advantages for a lot of the kinds of things that we want to do.”

The custom nature of the chamber brings its own issues, though, as many factors need to go right for it to work properly, meaning there are many things that can go wrong. Overall, the system has worked well and the researchers are happy with what they received from Russells, which also does annual routine maintenance on the chamber to keep it in top shape and sometimes more than routine work if needed. In addition, the filter paper and water the researchers use to keep the chamber wet require regular changing about every three weeks, a process that takes around a day and a half. Instrumentation surrounding the chamber also requires regular maintenance and calibration.

Working with the numerous researchers and students involved in the chamber can also be a challenge, but one Cantrell finds more enjoyable than bothersome.

“One of the things that’s really amazing is that when we have a cloud in the chamber in the mixing mode, we have a laser sheet that will illuminate the inside of the chamber, just a thin slice of it, so that you can see the cloud droplets. You can look in the window and watch that thing, and it’s mesmerizing,” Cantrell says. “I know what clouds are supposed to look like. I know they’re turbulent, and it still just amazes me that we can sit there and watch this process. I love that part of it.”

Research involving the chamber isn’t going to slow down anytime soon, with several other projects lined up for the near future involving cloud chemistry and the optical properties of clouds.

“It’s a pretty unique facility, so we’re very pleased that people have lots of good ideas for how to use it,” Cantrell says.