What has been true over the past four years of conducting this survey remains true: Those working in the scientific research field like what they do and have no plans to change careers. Although the number was down 2% from last year, those who said they liked the type of work they do remained at a high 90%. That said, there were nearly equal amounts of improvements and disappointments across all areas reported this year. Before discussing the survey results, we’ve provided a snapshot of this year’s 1,050 survey participants.

The majority of respondents (31%) work in the R&D departments of their organizations, followed by 18% in QA/QC. Those working in Technical Services comprised 12% of respondents, with the balance spread fairly evenly throughout other departments, as shown in Table 1. The overwhelming majority of respondents (48%) work in industrial research facilities, with all others dispersed throughout clinical, university, contract, private, and government labs, as seen in Table 2. Among those working in industrial labs, chemicals, pharmaceuticals, and biotechnology shared the majority spots (Table 3).

Overall, respondents to this year’s survey appear interested in keeping their labs viable, maintaining a capable staff, and staying relevant in the ever-changing research market. While all levels of lab professionals are finding themselves with increasing responsibilities, a growing number of respondents agree (up 6 percentage points from last year to 55%) that their staffing is adequate to provide quality products/services.

Compared with last year’s 7% who reported working for their current employer less than 1 year, this year that number grew 12 points to 19%. This may reflect improvement in the market, leading to more lab professionals finding jobs. Another possible explanation is that this year’s respondents also included a good number of lab professionals employed by scientific specialty service organizations, such as Kelly Scientific Resources (KSR). Therefore, this higher number may also reflect those who have found temporary, contract and fulltime positions with those types of organizations, and may also explain the uptick in staffing levels noted above.

Table 4: The Length of Time with Current Employer

And now the numbers

Perhaps this is attributable to what we see in Table 4, but with the growing number of new lab professionals entering the field, there is a significant percentage increase in salaries in the $25,000 to $44,999 range, as shown in Table 5 below.

Table 5: Annual salary, not including bonuses

Overall, lab supervisors/managers/directors across all research organizations saw their pay increase in 2011. But as in previous year’s surveys, as Table 6 shows, there is a sizable difference in the average salary of those working in industrial research labs compared to all other research organizations. And with the exception of those in industrial and government research labs, new chemists/ scientists entering the marketplace are averaging $25,000 to $44,999 per year in annual salary (Table 7).

An uptick in satisfaction

Areas of greater job satisfaction were found across the board, including staffing and training levels, resources and benefits. Specifically, 7% more respondents (71% compared with 64%) said they “strongly agree/agree” when asked if they were happy with their work-life balance. There was also a 4% increase (72% compared to 68%) among those who felt prepared for their next positions within their organizations. With regard to training and professional development provided by organizations, improvements were all in the double digits. When asked whether their organizations provided sufficient initial training, 65% “strongly agreed/agreed” (compared with 49% last year). As for ongoing training, 15% more respondents than last year (63% versus 48%) said their organizations provide as much ongoing training as they need. Regarding whether they are provided the information, equipment and resources they need to do their jobs well, 71% “strongly agreed/agreed,” versus 61% last year.

But not so fast

Despite these generally upbeat numbers, there was almost an equal amount of job dissatisfaction in other areas. For example, when asked whether they were given enough authority to make the decisions they need to make, 72% “strongly agreed/agreed” (versus 80% last year). Another telling drop came from the statement, “I believe my job is secure,” to which 13% fewer respondents answered in the affirmative (52% compared with 65% last year), and 7% fewer respondents said they feel valued at their organizations (63% versus 70%). Based on these results, it seems research professionals still enjoy their work and are satisfied for the most part with how their organizations operate, but lingering job insecurity remains for some—not a big surprise given the current economic climate in this country.

If you participated in this year’s Salary & Employee Satisfaction Survey, thank you. We look forward to returning to this important topic a year from now and will be counting on your participation.

How satisfied are Lab Manager readers with their current benefits and training opportunities? 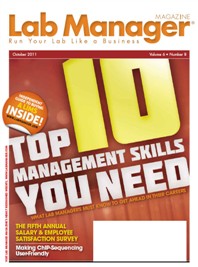